Book Review: House of Eternity – The Tomb of Nefertari 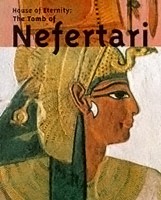 The tomb of Nefertari, wife of Ramesses II, is arguably the most beautiful of the New Kingdom tombs in Egypt, with its glorious scenes painted in vivid and vibrant colours on a pure white background. The lovely queen, Nefertari, is shown heading through the netherworld towards her afterlife. Deities lead her by the hand, demons protect the gates through which she must pass and the spells that will help her to avoid dangers and reach her goal are written on the walls in brightly coloured hieroglyphs.

This book captures so many of those beautiful scenes in full colour. It is worth purchasing for the photographs alone, but it has much more to offer.

Divided into 10 main sections, each chapter explores a different aspect of Nefertari and her tomb, as follows.

– The introduction looks at the geological context of the tomb, how the paintings were applied, how the plaster and paints have been damaged by minerals and humidity, and why conservation work became necessary.

– Nefertari the individual is then introduced with details about all the information known about her background and her life and role as the Great Royal Wife of Ramesses II. Her epithets are listed in full.

– Nefertari’s tomb is next put into the context of the Valley of the Queens on the West Bank of the Nile at Luxor.

– Next, the tomb itself is looked at closely in terms of its design and execution and the materials used. This is a fascinating insight into how this and other tombs were conceived of and how those plans were put into practice.

– The builders of the New Kingdom Royal tombs lived in a segregated village on the West Bank, and this is the next subject to be described.

– A short chapter looks at Egypt following the death of Nefertari.

– The book then looks at the damage that has been inflicted on the tomb over the centuries and gives an insight into conservation work and modern management issues.

– The texts on the tomb walls are looked at next, with their locations marked against a site plan. This is a very lengthy and completely fascinating chapter.

– Finally, the conclusion comes back one again to the importance of conservation.

There is no index.

This is an excellent introduction to one of the world’s most beautiful memorials to a person. The photographs are stunning and the text offers the best possible guide for a visitor to the tomb or for someone who wants to find out more about it than guide books offer.