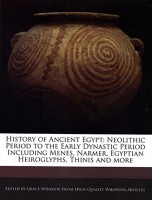 This is a self-published book, one in a series about Ancient Egypt, widely available on online book stores.  Before I go on to review the book I should make the point that I am very much in favour of self-published books, for the same reason that I am in favour of the Web.  They give people the opportunity of achieving something that conventional wisdom might not, perhaps, give them the opportunity to do.  As with the Web, of course, the problem is separating the wheat from the chaff.  In my opinion, this book is, to put it politely, chaff.

I ordered the book out of curiosity.  The description on Amazon.co.uk, where I purchased it, was quite up front about where the content of this and other books in the series was sourced: “Project Webster represents a new publishing paradigm, allowing disparate content sources to be curated into cohesive, relevant, and informative books. To date, this content has been curated from Wikipedia articles and images under Creative Commons licensing, although as Project Webster continues to increase in scope and dimension, more licensed and public domain content is being added. We believe books such as this represent a new and exciting lexicon in the sharing of human knowledge.”  In other words the compiler sets out to aggregate relevant Wikipedia articles and publishes them in a printed format, supported by a few black and white images which were posted on the Web under Creative Commons licensing.

I cannot object to having been in any way misled about the source of the content, but I have to say I was expecting rather more than a copy-and-paste job for my £14.99. Quality control was one of my expectations, but that was an expectation too far. I find myself in possession of an expensive lapse in purchasing judgement.

If you have access to the Web, what does this book offer you that the Web cannot provide?  I am at a loss to tell you, because I can find no additional value.  The text on the back of the book claims that you gain the advantage of all of the benefits of the Web (collaborative sharing, user-created, defying control).  I would not dispute that a key benefit of the Web is collaborative sharing.  Whether taking continually reviewed and frequently corrected and updated content from Wikipedia and slapping it within the covers of a book is a real “utility” seems to me to be more than somewhat debatable, as the information is taken out of collaborative circulation and is instantly, in Web terms, fossilized.  Is it a key benefit that it is user-created?  I’m not even sure what that means. Surely all content is “user-created” unless it has been plagiarized or copied?  And is it a good thing that the content defies control?  Well, actually there are two problems with this claim.  The first is that Wikipedia content does not defy control. In fact,  the community reviews and quality controls the content on an ongoing basis.  Second, quality control is a good thing – it ensures that information reaching the reader has value and validity.  This book is very much an argument against lack of editorial and quality control. 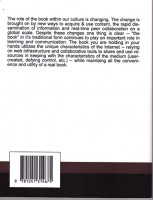 The back cover also claims that those wonderful aspects of Web publishing are here presented with “the convenience and utility of a real book.” I beg to differ.  Wikipedia was never designed to have its various articles presented in a linear sequence, and these articles were never designed to complement or relate to each other, to link together as sequential chapters or even function as an edited volume of papers.   There has been no editorial process – the compiler (I refuse to dignify her with the title “editor”) has created an expensive scrap book of other people’s material. There is no introductory text to help the complete beginner to make sense of the following articles. None of the chapters, formed of one or more Wikipedia articles, is provided with editorial text to segue between them.   There is no attempt to remove the many duplicated topics in the articles.

As well as failing to produce any real benefits, there are significant downsides.  One third of the book is taken up not with the Neolithic to Early Dynastic period, but with two introductory articles about Egypt’s entire history, with the emphasis on the Pharaonic period (entitled, respectively, Ancient Egypt and History of ancient Egypt).  Why would I want two short and far from detailed articles on Egyptian history when I had purchased something purporting to focus its attentions on the Predynastic?  How very peculiar.

Scan of page 35, showing the contents for a Wikipedia article which covers the entire history of Egypt

After the reader has flipped through the first 53 pages of irrelevant content on Pharaonic Egypt, the chapter headings are:  Precursors to the Predynastic Period, Lower Egypt, Upper Egypt, Predynastic Period, Protodynastic Period, Early Dynastic Period, Gods and Three Major States.  If this had been a planned book most editors would have seen that separating out Lower and Upper Egypt from the chronological headings doesn’t make sense – particularly when the information in those chapters is dealt with yet again in the following chapters.

There is a ridiculous amount of duplication of content.  The chapter on the Predynastic period repeats much of what has been introduced in the sections Precursors to the Predynastic Period, Lower Egypt and Upper Egypt.  The chapter on Early Dynastic Egypt drifts off to Japan and Tibet.  There’s a whole chunk on hieroglyphs, but only two paragraphs look at the origins of hieroglyphic writing – the remaining 12 pages on the subject look at the fully evolved Pharaonic writing system. As to the section on gods, quite what this has to do with the Predynastic or even the Early Dynastic I have no idea.  And Three Major States?  You will find three rather brief articles, the first of which (Thinis) has two paragraphs about the Predynastic and Early Dynastic periods before launching with rather more enthusiasm into the Pharaonic period over the next two pages. 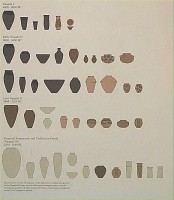 A photograph of a poster of Petrie's chronological sequence for Predynastic pottery from the British Museum. Photograph by Andrea Byrnes

Regarding the content provided in these articles, there are real problems.  Leaving all the Pharaonic pages to one side (which leaves surprisingly little on the Predynastic and Early Dynastic), and ignoring the duplication (with difficulty), some of the articles are seriously inadequate.  Presumably in their home environment on Wikipedia the articles will eventually be developed to become useful resources, but in this book the errors cannot be corrected.  Some of the “facts” stated are quite simply wrong.   Take this sentence for example:  “Weaving is evidenced for the first time during the Faiyum A Period, but unlike later Egyptian settlements, their dead were buried very close to and sometimes, inside their own settlements” (p.71).  Quite apart from the fact that it’s a non-sequiter  (what does weaving have to do with where people buried their dead?), to my knowledge only two burials have been found that may date to the Faiyum Neolithic (the date of one is insecure), which scarcely seem to merit such a sweeping generalization.  One of the key puzzles of the Faiyum Neolithic has always been, in fact, what the inhabitants of this successful society did with their dead.  On the same page: “The first Egyptian life-size head made of clay comes from Merimde.” Only if Merimden people had heads the size of baking potatoes (its is only 10.3cm tall).  This was a particularly flawed article, but it is not the only one to display errors and misleadingly sweeping statements. In another article, for example, is this particularly misleading statement: “Because all dates for the Predynastic period are tenuous at best, WMF Petrie developed a system called Sequence Dating by which the relative date, if not the absolute date, of any given Predynastic site can be ascertained by examining the handles on the pottery” (p.62).  What about all those pots in Petrie’s system without handles?  And what about all the schemes that followed Petrie’s early version?  And what about radiocarbon dating?  And here’s another one, also on page 62: “From the Tasian period onward, it appears that Upper Egypt was influenced strongly by the culture of Lower Egypt.”  That would be the other way round.  And anyway it is a serious stretch to claim any real influence of Upper Egypt on Lower Egypt before the end of Naqada I, if not later.  The first serious influence of Upper Egypt on Lower Egypt began in Naqada II.

There are gaps in the information.  Many of the early industries that characterized prehistoric Egypt are simply ignored. Two articles mention the Saharan Aterian industry, but neither of them point out that in Egypt it only ever reaches the oases, never getting any further into Egypt towards the Nile.

Much of the English is very poor.  I don’t mean that it is relaxed or informal, in the style of this review. I mean that some of the paragraphs are eye-poppingly bad.

And, of course, none of the links function.  This does not much matter where the full URL is provided, but it is ridiculous when, under a list of “External Links,” a reference is made to some title which might be of interest but is not accompanied by the associated Web address.  This is yet another downside of the copy and paste approach.

Speaking personally the final injury is that the book quotes me and spells my name Andy Burns.   Okay, my name is a bit unusual but would it be too much to ask for it to be spelled correctly? That would be Andie Byrnes, please.  And there is no link to the website from which that quote was taken – that would be www.predynastic.co.uk.

I am entirely in support of making information available in a variety of media so that it can become accessible to people with visual disabilities and to those with differing levels of access to technology, but this does not seem to me, in any way, to “represent a new and exciting lexicon in the sharing of human knowledge.”   It seems, in fact, to be a very crude way of taking advantage of something that has been given freely, and is a far from exciting way of fossilizing information which, in its own environment on Wikipedia, was available to be improved upon and updated.

I cannot recommend this book in any way.  It does no favours for the ground-breaking work of Wikipedia or the excellent books produced by numerous self-publishing authors.  It leaves you with a jumble of articles with wildly inconsistent standards of research, a number of errors, duplication and completely redundant information about the Pharaonic period.

One does wonder if Grace Windsor asked permission of the authors of these articles before she copied them into this book and charged for the content.

Unless you enjoy a good horror story, my personal view is that you should avoid this book, and should be wary of the rest of the series.

Introductions to the prehistory, Predynastic and Early Dynastic periods are provided by many books

If you are interested in the pre-Pharaonic period here are some recommendations for you.  They are all excellent introductory texts on the subject:

Michael Hoffman’s Egypt Before the Pharaohs,

Beatrix Midant-Reynes’s The Prehistory of Egypt,

For much shorter but excellent introductory guides see, in the Shire Egyptology Series, the books Predynastic Egypt and Protodynastic Egypt” both by Barbara Adams.