The SACE Ancient World Summer School “Beginner and Intermediate Hieroglyphs” course ran for a week in August this year.  It was led by Dr Mark Collier, Dr Roland Enmarch and Dr Glenn Godenho, all of whom teach hieroglyphs at all levels in the University of Liverpool.

The beginner course was designed to offer those with no existing knowledge the opportunity to get to grips with the topic, and to serve as a refresher course for those with more experience.  The Intermediate course was designed to allow the beginners to take their knowledge further in the remaining days, and for others who did not wish to take the beginner course to join at a higher level.  Each lasted for two and a half days.

Three of those attending the course offered to write up a summary of their experiences on the course.  With different backgrounds and levels of confidence they have provided an insight into their perceptions on the value and challenges of the course.  Our thanks to them for sharing their thoughts. 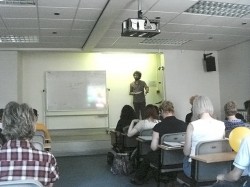 The second week of this summer school (1st – 5th August) at Liverpool University offered participants the opportunity to study hieroglyphs at beginner and intermediate levels.  With tutors of the calibre of Mark Collier (of Collier & Manley ‘How to read Egyptian Hieroglyphs’ fame), Roland Enmarch and Glenn Godenho – who could resist the challenge!  They were assisted by one of their star pupils from Liverpool, Hayley Meloy, who patiently answered questions and took us through handling sessions at Garstang Museum.

Numbers for this year’s course were in the region of 40, compared with around 8 participants last year when the first hieroglyphs course was offered, such is the popularity of the subject!  All ages and abilities were represented.  I have completed two years of a three year online Egyptology certificate course with The University of Manchester, part of which includes hieroglyphs.  A fellow Manchester student also took part in the week’s studies, so it was an excellent opportunity for me to become better acquainted with her and to support each other as the week progressed – I fear though that I required rather more support than I gave her – she is a retired Classics teacher.  An acquaintance of mine from The Southampton Ancient Egypt Society also took part in the week’s studies and so this resumé is seen from each of our perspectives.

We opted to stay in Halls in individual en suite bedrooms, with breakfast and evening meal included in the package.  The rooms were perfectly comfortable though a little down-at-heel, the food was good, the only slight drawbacks being the need to make our own way to the University in central Liverpool and pay city-rate car parking, and foreign students staying in Halls who were a tad noisy. I was so tired after the lectures though that nothing kept me awake!  Each day we made our way to the University clutching our individual copies of ‘How to read Egyptian Hieroglyphs’ or HtrEH as they were referred to!   The building the lectures took place in was an attractive one in Abercromby Square and quite probably Listed.  It didn’t contain a lift and as the lectures took place on the second floor some people found the stairs (50!) onerous.  Due to the muggy weather, air conditioning would have been welcomed by tutors and students alike!

Each day was based on one-hour lectures (on the second floor) for the whole group, followed immediately by practice sessions (on the ground floor) when we were split into small units supervised by the exceptional, enthusiastic tutors who gave us the opportunity individually to ask questions, which were patiently answered, and to work at our own pace. My background is historic house management, though I was pinning my hopes on my ability to grasp hieroglyphs due to my knowledge of shorthand which, like hieroglyphs, is based on phonetic outlines, consonants only being represented. The syllabus was covered, of necessity, at a full-on pace, with half the week being devoted to beginner level, following which some people left the course (by design!), and the second half of the week to intermediate stage, when others joined.  Lecture subjects covered the 1, 2 and 3 consonant signs, Royal names, the offering formula, funerary deities and festivals, nouns and verbs, past tense, complex clauses and future tense.

Having some grasp of hieroglyphs due to the online Manchester course I was fine up until about the end of day 3, but then I did rather wobble/struggle.  Had the pace been slower I like to think I would have been fine, and my feeling is that the subject justifies a week for each stage, but that might be because of my great age, and my fellow students may well report differently!  I have to report that the relationship between shorthand and hieroglyphs proved to be only phonetic, though I do wonder if Sir Isaac Pitman got his idea for shorthand from hieroglyphs.

We have been offered ongoing support for our studies, with the possibility of further courses to supplement what we have learned already.  The organisers were keen to have our feedback, in order that next year’s summer school is even better than this year’s, including possibly accommodation nearer to the University, with lectures in a perhaps more conducive theatre.  As organiser Glenn Godenho remarked: they are victims of their own success and are almost duty bound to offer an advanced level next year, in addition to beginners and intermediate.

I greatly enjoyed the course, meeting like-minded people, and now know so much more than I did a week ago – the rub is, will I remember it?  I must!

Written from the perspective of a retired Latin teacher.

Like the previous writer, I have just finished the second year of Manchester University’s online Certificate in Egyptology, and we both appreciated  having the company and support of a fellow student during what turned out to be an intensive, exhausting but hugely enjoyable week.

I found the first half of the week very useful for revision, and it was good for the morale to feel that one had some mastery of the basics, at least.  My background is in   Latin teaching and  I was looking forward to getting my teeth into some grammar in the second part of the course.  (It was interesting, to me at least, that there were two other classics teachers in the group).The lectures by all three tutors were brilliant.  Roland Enmarch warned us as he began his first lecture that his students called him the “Grammar Nazi”!  This was a very unfair nickname – a stickler for grammar he may be but his delivery is charming and lucid.  Indeed all three lecturers were superb and kept most of us gripped.  Each lecture “broke the back” of the grammatical points covered in a specific chapter of “How to Read Egyptian Hieroglyphs” (by Mark Collier and Bill Manley). The pace was certainly full speed, and I sometimes felt as if I were playing catch-up in the practice sessions – trying to get to grips with new material without having finished work on the previous input.  However, the wealth of practice material we were given gave us ample scope for consolidating in our own time what we had learnt.  We could do as much or as little of it as we felt we needed.  Some preferred to work from the text book (How to Read Egyptian Hieroglyphs), and others stuck to the teaching pack we had been given at the beginning of the week.

Before I did this course, I knew nothing about how any middle eastern language worked.  It was fascinating to encounter “tenses” that were given convenient labels such as “future” or “past” but which in fact seemed to convey a very different view of the relationship between time and action from the ones we take for granted in European languages.  The “Stative”, for example, seems to share some characteristics of both the Latin perfect and pluperfect tenses, but is neither, and goes beyond them both.

Would I recommend this course to others?  Most certainly, but I think it could do with “stretching”.  A week would not be too long for the Intermediate level.  It is quite a challenge to absorb, retain and recognise such a quantity of new information in a few days, even if one understands the principles.

The SACE Summer School has now become a fixed point on the calendar, and I know that next year the organisers are hoping to improve the lecture room accommodation and practice room.  I am already looking forward to Advanced Hieroglyphs next summer!

What a fortnight! First week: The Transition from the Old to the Middle Kingdom. Being a comparative beginner in the world of Ancient Egyptian History this was my first chance to get some specific tuition. The entire teaching staff of the Liverpool Uni team were co-opted and I now know why Liverpool Uni has such a prestigious reputation in this field. Every one of the teaching staff was excellent in every way. I learned so much.

Second week: Hieroglyphs, my great obsession and passion. I did the beginners course at last years SACE summer school and the intermediate course this year and had been attending an evening class in between. However, until I got to this years Hieroglyphs course I was really struggling with the more complex elements of the grammar, I am glad to say I had my Eureka moment with statives, relative forms and participles. Again wonderful teaching and individual backup were to key to my success and 3 hours a day personal study for the 3 weeks leading up to the course to get as prepared as possible. I am not a fast learner.

In daily life I teach the 3 skills that are required for making a medieval manuscript. Calligraphy, illumination and bookbinding. However it was not really this which set me off on my Egypt related studies, rather a BA Hons in a very different field of history from 1992, Early Modern and Modern European Social History and a long held wish to go to Egypt. I felt I wanted to be better informed for this. My particular interest in hieroglyphs wasn’t inspired by my calligraphy experience. It was the certainty that a primary source is better than a secondary one. Little did I know about the habit of Ancient Egyptians for wild exaggeration. The cross over with my work and my passion is in the use of papyrus. At the moment I am not using any other material for my work. I looked at what the Ancient Egyptians used to prepare their papyrus, tried it, then worked out other ways of preparing papyrus to suit my purposes, making letters with a metal pen or with a pointed brush. Although I am using the English language my themes are Ancient Egyptian and keep to the palette that would be seen on an Ancient Egyptian papyrus, including pure gold leaf. I may one day get to use hieroglyphs in my work. Watch this space.