A separate page has been created for the National Egyptological Museum in Tahrir Square, other museums are listed on this page.

Coptic, Islamic and Pharaonic items have been stolen from beneath Ewart Hall at The American University in Cairo’s downtown main campus.  Three employees have been arrested but deny the charges: the stolen items have not been found.  No details of the stolen objects have been released.  Disappointingly the committe charged with determining what was stolen did not visit the musuem until 5th June 2011, a month after the theft.

Coptic sources are reported on Facebook as saying that no Coptic churches in Cairo have been attacked.

Looters attacked the museum.  It is known that Coptic Egyptians tried to protect it.  A report from Hany N. Takla in the comments to this page, suggests that with the minor exception of a couch and chandelier the museum and its contents are safe as at 1st February:

… one of the former Museum Staff verified to her sister in Southern California that there was an attack but the contents of the museum was not touched. That does not discount the report that there was minor theft of a couch and chandelier. If it is true it would be something within the outside walls but not inside the museum building. In any case the antiquities inside are reported to be safe.

The theft of the chandalier and couch are not confirmed.

During protests on Saturday 17 December 2011, The Egyptian Scientific Institute, home to Cairo’s most important libary was burnt out.  The library contained books like:

News from the salvage effort indicates the scale of damage:

“More than 10,000 books have been completely burnt,” says Dar al-Kotob Director Zain Abdul Hady. About 20,000 books were damaged by the fire and water, while another 20,000 arrived in good shape, he adds. ” From Egypt Independent, and “Among the rare books which were damaged is “Denkmäler Aus Aegypten Und Aethiopien”(“Monuments From Egypt And Ethiopia”), a massive 12-volume compendium.”

Restoration of the building itself is nearly complete (May 2012).

There is a separate page for Giza.

In August 2012 this site was reported to be in “dire danger” from illegal urbanisation.

To quell rumours of un-announced thefts from the Museum of Islamic Art, Timor Pasha’s sword and dagger were put on public display from mid-July 2011.

Dr Hawass reports that this was occupied on 5th March and the intruders have not yet been evicted.

The mausoleum was raided on 26th February 2011.  It’s entire contents of antique furniture and artefacts was looted.  The Al Masry Al Youm article describes a history of looting over the past decade or more, culminating in this latest incident.

On 24th May 2011, Dr Hawass announced renewed co-operation with the Ministry of Waqf and that a specialist company would be hired to protect certain (unspecified) historic mosques.

Two copper door knockers belonging to the Qagmas Al-Ishaqi and Al-Gay Al-Yussufi mosques were reported stolen on 22nd May 2012 by Ahram Online.

The latest news (31st January 2011) is that the Deputy Director says the museum is locked and untouched. He is keeping a close eye on it. 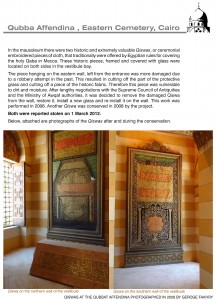 Two valuable Qiswa were stolen on 1st March 2012 according to Agnieszka and Jaroslaw Dobrowolski.  Photograph © George Fakhry, 2008. Further photographs of the qiswa being restored available here, including one tragic photo of the smashed and looted display case.

Despite the lack of police for a period of two weeks, there are no reports of attacks on synagogues.