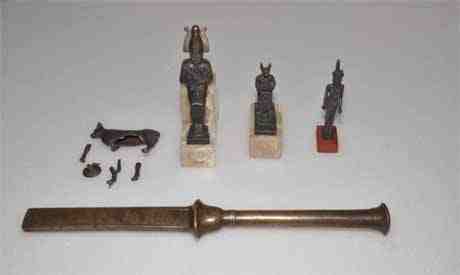 On 15th March, the SCA released an official list of over 60 missing items. Twelve items have been recovered from this list in mid March and 5 more at the end of March, which are shown in the photo, whose recovery was described by Dr Hawass.  These items are catalogued in this SCA list which has details of their conservation status. (Items recovered shortly afer the break in are not shown in this SCA list.)  Three of the Tutankhamun objects and a Yuya shabti were recovered in early April.

On 2nd May, the recovery of a further further four bronze statues was announced, two from the list of items missing from Egyptian Museum and two presently unidentified.

The outstanding list is as follows, which has been re-issued as an SCA document with improved photographs and inventory details (version: 28th March 2011):

It is difficult to compile this list as there are apparent discrepancies between the items reported to be discovered and those reported stolen.  For instance, Dr Hawass reported the recovery of shabti 68984 but it transpires it was wrongly identified and this shabti is still missing, but 68982 has been recovered.

Luxor Times Magazine and others announed on 17th March that 12 items were recovered in a police sting.  Some supposed photos of the recovered items have appeared, but these are not yet considered to be reliable.  The list is thought to include:

Youm 7 reports n late 2011 that the Bastet statue was recovered but there has been no official report.

I have retained earlier unofficial lists (below) for now as these have better photos for some items.  There also remains considerable concern about damage to items.  Various important items have been shown clearly to be damaged in various segments of TV coverage but no full report is has been published even a year later. Further photos can be found on Loot Busters.

On 3rd February, The Minister of State for Antiquities, Dr Hawass, released photos of a press tour to inspect the damage to artifacts in the break in overnight on 28th/29th January, including this one of the Tutankhamun exhibit rooms.   This tour should help to reassure that the damage to artifacts has not been materially under-reported.  Conservation is underway and is expected to be completed shortly.  The list of damaged artifacts emerged over the two weeks following the break in.  Initially the most authoritative source for the list of artefacts damaged has been Eloquent Peasant, maintained by Margaret Maitland.  National Geographic has also carried a montage of images.  This was supplemented on 6th February by a clarification from Dr Hawass.

However, on February 11, Dr Hawass posted a more complete summary of the damage on his personal blog. Together with the videos and photos gathered in Kate Phizackerley’s article on News from the Valley of the Kings, this offers the fullest list of damage, although the Hawass statement does not include some of the Tutankhamun objects identified by Maitland in her earlier article (linked above), notably the statue of King Tutankhamun in a skiff with a harpoon.

This is a contemporaneous interview from Dr Hawass explaining the intrusion:

Further reports of attempted break-ins were received on 31st January.  These were apparently repulsed by soldiers and the would-be looters arrested.   In all, four separate attempts to break in to the museum have been reported; only two were successful: on the same night that objects from Tutankhamun’s tomb were damaged, the museum gift shop was raided.

I will tidy the page later, but wanted to get today’s news on quickly,

Dr Hawass has confirmed the following items were stolen from the Egyptian Museum (I have added inventory details as known):

Tutankhamun being carried by a goddess (Photo: Griffith Institute)

1.     Gilded wood statue of Tutankhamun being carried by a goddess (tomb object number 296a) – fragments of the goddess portion retrieved, but the Tutankhamun figure is entirely missing still

2.     Gilded wood statue of Tutankhamun harpooning – only the torso and upper limbs of the king are missing.  (There were two similar figures found in the King’s tomb: objects 275c, 275e, and it is presently unknown which was stolen.)

3.     Retrieved (intact) on 16th February Limestone statue of Akhenaten holding an offering table (belived to be the statuette found by Borchardt at Tel-el Amarna IN 1911, Egyptian Museum number JE43580)

5.     Sandstone head of an Amarna princess

6.     Stone statuette of a scribe from Amarna

Yuya’s heart scarab and one shabti were found outside the entrance to the museum gift shop on 14th February according to Ahram Online.

The best present catalogues of these missing items has been complied by the Penn Cultural Heritage Centre and includes photographs where available to the author.  (Some of the items are not fully defined by the Hawass announcement and greater clarity is sought, including inventory reference numbers and inventory photographs from the Egyptian Museum itself.  It is deeply disappointing that the Museum has not published these details in full.  Sandro Vannini photographed the Tutankhamun collection for the book King Tutankhamun, Treasures of the Tomb by Dr Hawass, and many other objects for Dr Hawass new book Highlights of the Egyptian Museum.  High quality colour photographs of most of the stolen items should be available to Dr Hawass.)