Dr Hawass reports, “The el-Zoulien archaeological site, near San el-Hagar (Tanis), in the Sharkia Governorate, has been damaged. Villagers there have farmed the land and built houses on top of it.”

Dr Tassie reports in a comment on this site that two men in an illegal dig beneath a house found limestone blocks which they tried to sell.

The main report for Qantara and any updates is now on the Sinai page.

The Tal al-Farain antiquities storehouse in Kafr al-Sheikh was attacked by more than 40 armed men on Saturday 5th March, said state-run news agency MENA.  Sadly, some SCA staff were shot and seriously injured while trying to protect the site.

In statements to MENA, Mohamed Abdel Maqsoud–head of the central administration for the Antiquities of Lower Egypt and the Delta–said the armed men managed to break open the door of the storehouse, rifled through its contents and broke some boxes of artifacts. Guards and archaeologists managed to detain some of the criminals, while the rest fled. A committee was formed to determine what the stolen items are.

This was the second attack on the site and has been wildly reported, with Reuters adding more information:

The warehouse doors were destroyed as were display cases, MENA cited the Head of the Central Department of Lower Egyptian Antiquities Mohamed Abdel Maksoud as saying. Some of the attackers had been caught, while others had escaped, he said.

The magazine also stores items found at el-Monufia, el-Gharbia, Kafr el-Sheikh and El-Beheira. Five cases were opened. The 27 missing items have now been reported by the Minstry for Antiquities via Ahram:

On 12th March, Luxor Times Magazine reported a recent, apparently unsuccessful, attempt to attack the site, as well as an attack a year previously.

Mr. Naguib Nour, the manager of Dakahlia antiquities, said that the Tell al-rub’ storage was attacked twice; first time was last year when the guards managed to arrest the two thugs who attacked them after an exchange of fire. The second time was last week; the guards managed to protect the storage and fired at the attackers who tried to break into the magazine but they ran away.

Mr. Naguib also stated that some bronze statues were relocated to the Grand Egyptian Museum to protect them…

Dr Hawass reported on 3rd March that “the Sabeel of Ali Bey Al-Kabir, was broken into and three windows of Msavat metal framework, furniture and the modern iron gate were stolen. Some pieces of the window were found in the possession of street merchants.”

Domincan Today in January 2012 reports that artefacts discovered by Kathleen Martinez in her hunt for the tomb of Cleopatra were looted during the Revolution, along with expedition equipment.

The Tell-Basta resumed work in early March and confirmed the safety of the site in an email to EEF, copied to this site in a comment on the Delta page:

Today we visited the site and fortunately can confirm that all magazins and the museums have not been looted at all. Anyway as the local authorities informed us, there was an attempt to loot the site and magazine two weeks ago but the local Ghafirs were able to protect the site and no harm was done.

On 17th Febuary Dr Hawass had reported this unsuccessful attempt to raid this site, “The Egyptian Military caught and released thieves attempting to loot the site of Tell el Basta.”  His report on 3rd March made a vague, further reference to this magazine, “Magazines in Tell el-Basta and Wadi el-Feiran, near Sharm el-Sheikh, were also subject to breaking and entering”.  It is unclear whether he was referring to a new incident or to the original break in.

The site was reportedly protected by local citizens during.  As of 8th March, the storeroom was photographed to be sealed and intact; however, part of the site has been ploughed and corn planted since 2004 – photos of 2004 and 2011, with commentary.  On 31st March, the situation deteriorated further when the mission magazine was looted and reportedly many items stolen, including pottery, two medallions and a sword; however, an alternative report by Dr Maksoud suggested only five items were stolen.   A list of 78 stolen items was subsequently published which includes pottery, some discs, jewelery and other items but not a sword. 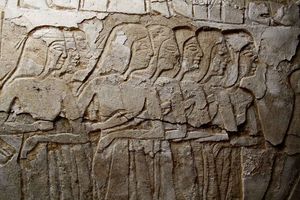 On 3rd March, Dr Hawass reported the sad news that “The tomb of Ken-Amun in Tell el-Maskhuta, near Ismailia, was completely destroyed. It is the only known 19thDynasty tomb in Lower Egypt.” Quite what this means is unknown. It is possible that the reliefs were hacked out and might be recovered, or they might have been destroyed. What we do know is that this was formerly a beautiful tomb as reported by Discovery News. Recently discovered, it is not clear if it had been fully researched before destruction.

In an article dated 12th March, Luxor Times Magazine passed on a report by the local SCA inspector of threats to the sites of Tanis:

That group called themselves the Braves and they have kettle and animals over there beside that they are digging for antiquities. Mr. Tarek said that he filed a report to the tourism and antiquities police on 21st February and 10 days later he files another report but the threat still exist.