By 21st March, reports suggest a couple of hundred robber pits, some up to 5m deep and some penetrating unknown tombs which were then completely looted.  Tombs have been raided and on 27th March Dr Hawass revealed that, “a new cemetery has been built over twelve acres in an area containing 1st and 2nd Dynasty tombs.”  (Obviously, the suspicion is that this cemetry might pre-date the revolution.)

On 3rd March, Dr Hawass had already confirmed that the Czech mission magazine had been raided. It seems likely that the magazine was raided early during the revolution and that reporting has been delayed.   The first on-site survey of damage from Miroslav Barta, the leader of the Czech mission, appeared on 4th March and Barta is reported as follows (translated):

There are a few dozen thieves excavations at various places in the tombs and burial pits. Thieves got into our stores. Some records have disappeared, most of them suffered by the thieves threw everything on the floor and even stepped in it, so anthropological materials, organic materials, ceramics and decorated blocks we have found themselves mixed up, “said Barta.

Prof. Miroslav Verner later said that most of objects in the expedition store are irretrievably damaged, including Old Kingdom objects from King Raneferef‘s tomb and the vase of King Huni. 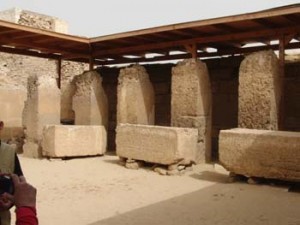 On 15th February 2011, Karl von Habsburg and Drs. Joris Kila accompanied by the office manager of the Dutch Institute, Tilly Mulder, visited the archeological site of Abusir on behalf of Blue Shield, having failed to reach the site the previous day.   A full report of their visit was issued on 17th February, which for Abusir states [editor: bold added for quick reference]:

The mission was told by a very helpful SCA inspector about illegal diggings. Supposedly they went no deeper than 50 cm and were already filled in again. But the illegal digs were too far away to be checked within the limited time available. It was decided to visit only the Mastaba of Ptahshepses as an example. This one could not be locked, and the mission was told that there had been people there but no damage could be immediately assessed.

This is consistent with earlier reports that all sealed tombs have been opened and on 17th February, Dr Hawass admitted, “In Abusir, a portion of the false door was stolen from the tomb of Rahotep. ”   There were early reports of “vast” damage.  On 1st February the Sun [UK national tabloid newspaper] ran an artcle on 1st February indicating horrifying levels of damage and looting.  The article includes a picture of a gang digging, supposedly taken at Abusir.

Maarten Raven has received confirmation from reliable sources that the Cairo University magazine has been looted. and added in April that materials from the Abusir magazines are being moved to Saqqara for safety. The looting  of the magazine has since been confirmed by Dr Hawass.  The early denials by Dr Hawass in an interview with Fox News (“Everything is safe at the site of Abusir,” and. “Nothing has been stolen from Abusir.”) now look terribly misplaced.   A 1m x 60cm relief discovered by Raven’s Czech team was retrieved by police in October 2011.  It depicts four walking geese and is to go on special display at the Egyptian Museum following restoration.

Worryingly, the situation at Abu Sir has not normalised and by February 2012 there were press reports of ongoing organised looting and site encroachment.  Worse, “The Ministry of State for Antiquities Affairs refused to provide a statement, stating that any looting of the area has stopped, and that the issue of garbage dumping is not its responsibility.”