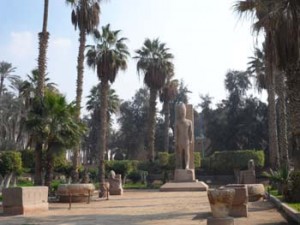 The Minister of State for Antiquities, Dr Hawass said on 1st February that all 28 musuems are safe and again on 5th February he said, “The site of Memphis, like all the other sites in Egypt, is safe and has not been looted.”  This was confimed by the Blue Shield inspection on 14th February 2001.

This inpsection casts doubt on the sources of former Museum Director Wafaa el-Saddik who gave an  interview to De Zeit [German national newspaper] in which she said:

The Museum in Memphis, and its magazines were thoroughly robbed on Saturday morning. The leaders there have called me in desperation and prayed: “Save us, do something.” I first phoned the police, but they did not respond. I’ve alerted an Army General, I know. But it was too late.

However, the Blue Shield team did not visit the local magazine as its existence had not been determined before they visited Memphis Museum.  A photo purporting to be the ransacked Russian storeroom at Memphis appeared online around the middle of July 2011, although this verification of this photo is somewhat deficient.

The Egyptian Chronicle on 12th March reports a local farmer as follows:

“It has got worse in recent weeks with people digging for antiquities and building on the State-owned land here,” he adds.

“These violations have been happening for the past decade and officials haven’t done anything about it. When the revolution erupted, the Antiquities Police and the cultural officials working here disappeared, which has only exacerbated the problem.”

There was better news on 20th May when Dr Hawass reported that “Today, MSA personnel, the police, and the army worked together to remove all of the new tombs that were built above the site of Mit Rahina”