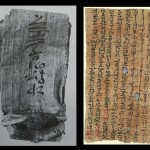 Heqanakht’s ‘letters’ consist of a number of related papyri which have been dated to the early part of the Twelfth Dynasty (2025-1700 BC). The papyri deal with the day-to-day concerns of a well-to-do, land owning farmer who lived near Thebes and who carried out his professional duties as a kA-priest near Memphis. The letters and accounts which make up the papyri were found unopened and, apparently unread, ‘in the condition of their original shipping’ (Goedicke, 1984, p.5). In two instances, the letters still bore their original clay seals END_OF_DOCUMENT_TOKEN_TO_BE_REPLACED

By Barbara O’Neill.  Published in Egyptological Journal Articles, Journal Edition 5. August 14th 2012 Introduction: An Individual Life The following article will focus on the life and times of an Egyptian farmer through an exploration of his letters and accounts.  Heqanakht’s papyri offer a rare glimpse into the life of a minor official during the […] END_OF_DOCUMENT_TOKEN_TO_BE_REPLACED