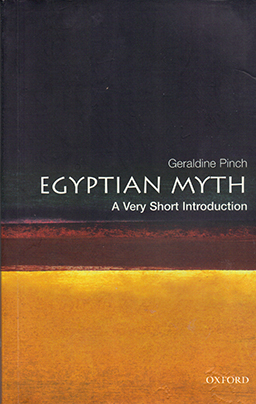 Dr Pinch has a formidable task.  She has 125 pages at her disposal. Before she can get into her subject, she has to tell us something about the nature of myths and mythology, so that when we get to Egypt we can recognize the creatures we are dealing with, appreciate what the mythology is trying to do, and see how it differs from the rich mythologies of other people.  Once underway, she must relate myth to religion, ritual, magic and the Egyptians’ preoccupation with the afterlife.  If this unfamiliar world is to make a lasting impression in the mind of modern readers, she must draw attention to the central differences between the Egyptian conceptual system and our own, between their ways of seeing and categorizing the natural world, people as physical entities, and the world of the human mind. Most anthropologists would need at least a 1,000 pages for a job like that, and would call their offering “preliminary”.

The myths themselves, and the conceptual system which is embedded in them, do not make the job any easier.  To say that the myths are rich, varied, overlapping, continuously evolving, elaborating, apparently incompatible, probably incommensurable and promiscuously engaged in procreation with each other, would somewhat understate the situation.  You start running out of adjectives before the Egyptians start running out of ideas.  Dr Pinch shows, to my complete surprise, that they have an underlying unity, but a unity appropriate to their way of seeing things, and to the work which they have to do.  In his famous discussion of games, Ludwig Wittgenstein distinguished between definitions, common elements, and “family likenesses”.  Dr Pinch shows that Egyptian mythology is not a formless jumble but, like games, sports and pastimes, has a “family likeness”.  Ludwig would have smiled upon her.

At the beginning of his ‘History of Western Philosophy’, Bertrand Russell tells us that the first step in encountering a new philosophy is to try to understand what it feels like to see the world that way.  This is good advice for your first encounter with Egyptian thinking, and it is what Dr Pinch does.  Russell would have liked that.  To win the approval of both Wittgenstein and Russell is no small feat.

If I understand it correctly, there are two central distinctions between them and us.  First, when they come to categorize the universe, the Egyptians draw their lines in different places. Second, they use a no-man’s land instead of well-defined front lines for separating categories.  Once you start to draw different lines between the animate and the inanimate, people and animals, between the mental and the material, between agency and causation, and between the symbol and the symbolized, you generate radically different models of the universe.  Once you start decomposing personal identity into Brian Alm’s nine components, possibilities for chimeras of consciousness multiply.  You do not, for instance, need to postulate a separate “divine”.  God-animals, god-kings, bas and kas in different places at the same time.  Life and death becoming a continuum.

Dr Pinch shows how, from different starting points, the Egyptians arrived at different destinations, in a way that we can understand.  To that extent the system is coherent.  Despite the anxious barkings in the dark of militant materialists, the part of ourselves that we experience directly is of the stuff that dreams are made of.  Unfortunately, by applying the categories of mind stuff to sticks and stones and pyramids and scorpions, you arrive at remote and unstable destinations.

There is an external reality which constrains the conceptual systems which are compatible with survival.  Amongst those conceptual systems which are compatible with survival, some serve their users better than others.  Several years later modern thought has not agreed the boundaries or relationships between mind and matter, consciousness and the brain. But we have no real problems with the hinterlands.  The categories into which we divide the physical universe aim to be sharp, explicit and unambiguous.  They come equipped with rules marking out their territory.  The contents of consciousness, that is our feelings, intuitions, emotions, beliefs, anxieties and motives do not lend themselves to boundaries and segregation in this way.  Nevertheless, we go to enormous trouble to make ourselves clear and to impose as much discipline as we can.  These rules have served us well.

Lacking absolute, clearly marked and testable categorical distinctions, the Egyptian conceptual framework engages poorly with physical reality and obscures differences between the physical and the mental.  But as Dr Pinch makes clear, this does not leave it incoherent.  She shows that while there is plenty of randomness and arbitrariness, its fundamental deviations from what we take to be reality are systematic, and therefore understandable.  Professor Kemp in his short ‘How to Read The Egyptian Book of the Dead’ says it beautifully: “The Book of the Dead is a kind of fossil in the history of the human mind.  It belongs to a people with a different sense of experience, knowledge and learning than we possess today. This is perhaps its greatest value. It preserves a mindset that is no longer living”.  I would suggest that Brian Alm’s articles in Egyptological, Kemp and Pinch are read together.  Using the Egyptian categorical system, you could, if you like, consider them one person, even if they disagree. 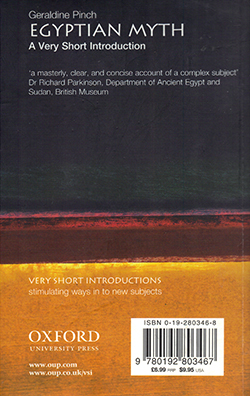 Back cover of Egyptian Myth

It is worth remarking that it is important to stay with this very impressive book through the first two chapters.  Dr Pinch was clearly concerned with the need for brevity and compression.  Her writing is terse.  She fires in bursts of subject-object-verb.  Of its type, it is a brilliant piece of writing.  If all business documents and the reports of government departments were written like this, the economy would grow and civil society would flourish.  It does the job, but does not draw the reader on.  You get the information but you miss the stimulus.  The stimulus and intellectual engagement arrive in force at chapter 3.  The fascination grows as Dr Pinch exposes the complexities of what could have been a book of fairy tales.  At the end, she pulls the whole thing brilliantly together in the Egyptian’s hopes fears and beliefs about the afterlife.  In the most recent edition (Edition 4) of Egyptological, Brian Alm quotes Kemp: “the Ancient Egyptians created a world of supernatural forces so vivid, powerful and inescapable that controlling their destiny within it was their constant preoccupation.”  Dr Pinch explains that the mythology also had a social role, in particular the entrenchment of the political status quo, but for the individual, the hub around which the mythology rotates is our fate in the afterlife. She tells us that, from the Middle Kingdom onwards, all the dead could aspire to join the crew of the sun boat on its nightly journey:   “The afterlife became an eternal voyage with humanity literally in the same boat.”

Kemp, B.  2007
How to Read The Egyptian Book of the Dead
Granta Books

Russell. B. 1945
A History of Western Philosophy
George, Allen and Unwin