Book Review: Guide to the Valley of the Kings by Alberto Siliotti

Guide to the Valley of the Kings

Tomb KV8 (Merenptah) in the Valley of the Kings - Burial Chamber

The title misleads.  The guide covers much more than the Valley of the Kings: only 58 of the 168 pages are devoted to the Valley of the Kings; 10 pages describe key tombs in the Valley of the Queens;  the West Bank temples are granted another 46 pages, although this section includes some of the main Deir el Bahri tombs as well; the Tombs of the Nobles get 19 pages; and miscellaneous extras like maps and details of trails in the Theban Hills fill the remainder.  In terms of coverage it is a perfect West Bank companion covering only the top sites which either are open to the public, or, like the tomb of Seti I, deserve a place in any guide to the Theban Necropolis.

In short, the contents are aimed at visitors to the West Bank and not to those wishing to study the tombs.  Does the style match the contents?

In short, yes.  The layout is again focused at potential visitors to the monuments.

An example serves best to illustrate this – tomb KV8 (Merenptah) is covered in four pages.  The scene is set by a diagram of the King’s cartouches and photographs of the bust of King Merenptah and of the Israel Stella. Keeping the focus on the tomb, a brief biography of Merenptah is included, but only within the caption for the bust which is printed on the facing page.  The tomb itself is prominently introduced by a large picture of figures pulling the barque of Re placed centrally across the page fold, smaller inset pictures and two diagrams of the layout of the tomb, one top-down plan showing the transverse layout and a side view illustrating the y-axis (height / depth).  No scale is provided.  The second double page spread is dominated by a large 3-D representation of the tomb which successfully shows the progression through the tomb, stairways, pits, chambers and pillars.  A minor gripe is that, unconventionally for plans in general, the entrance is depicted on the righthand side of the plan.  (For unknown reasons this seems to be somewhat common for plans of the Valley of the Kings though.)  The plan is surrounded by inset colour photographs of reliefs and features like the King’s sarcophagus.  Lines link the reliefs to the plan so that it is easy to see where a particular relief is located.  This is a superior approach to many alternative guides and is made possible by a page size which approximates to A4 and the spreading of content across double page spreads.

The text is simple, straightforward, relatively brief, and again focused on the interests of the likely visitor.  Mostly it highlights particular aspects of the tomb which might interest, but confusingly includes some further biographical information on the King.  These days more information can be found on Wikipedia than is printed in the guide.

The Valley of the Kings and the Tomb of Tutankhamun (KV62)

The guide covers the following tombs: 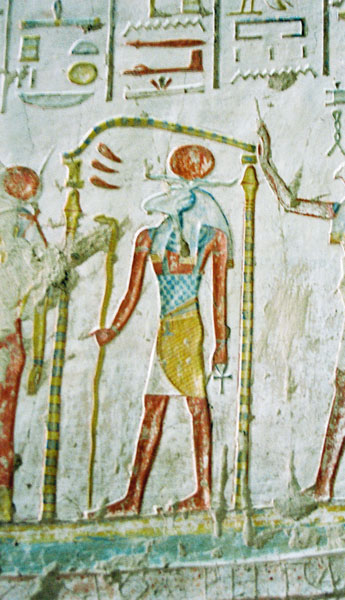 Relief from Tomb KV8 (Merenptah) in the Valley of the Kings

Maintaining the focus on tourists with an interest in Ancient Egypt, the tomb of Tutankhamun is singled out for special treatment.   The tomb plan on the second double-page-spread marks the location of the Descending Corridor and Annexe but doesn’t show them so that the Ante Chamber, Burial Chamber and Treasury can be shown in larger detail.  Major objects are shown on the plan, located in the approximate position they were found, although the chaotic jumble of objects is not depicted.  This is much the best diagram of the location of principal artefacts I have seen.  The plan is surrounded by colour photographs of many of the key artefacts.

This is followed by six more pages on the treasures from the tomb.  There is no text beyond captions, but the photographs are well taken, clear and well printed.  They are really nice.  One double page concentrates on the nested coffins and has a good plan to show the sequence.  The next double page shows some of the golden objects.  The third double page concentrates on some of the colourful objects like the heart scarab.  Visually it is an attractive classification, but the coverage tends towards the showiest items.

Valley of the Queens and the Tombs of the Nobles

There are similar priorities in these sections, with coverage of the following tombs:

In terms of both pictures and text, the tomb of Queen Nefertari is given the most detailed coverage of any tomb in the book.  Even the 3D plan of Nefertaris’ tomb is split across two double pages.  This section has over 40 colour photographs, mostly of the tomb, including one reproduced at a large size across a double page.  An odd, and welcome, inclusion is a photograph of a pair of sandals found in the tomb, one of the very few artefacts discovered in her tomb which is of course known for the beauty of the reliefs.  The two tombs of the sons of Ramses III which are covered by the book (Khaemwaset and Amun-her-khepsef) get one double page each, plus one further double page about the five sons of Ramses III buried in the Valley of the Queens.

Coverage of the selected Tombs of the Nobles is also excellent.  The tomb of Inherkhau gets two double pages on a par with tombs in the Valley of the Kings but even the tomb of Mena gets a full double page with eight colour photographs and a tomb plan.  Since it cannot be visited, it was pleasing that the important Deir el-Bahri cache was also included.

Temples of the Theban West Bank & Other Items

The treatment of the temples is consistent with that of the tombs, with coverage again built upon the foundation of a plan of the layout, surrounded by a plethora of colour pictures.

Again the temples of most interest to tourists are granted the most complete attention.  Eight pages (four double pages) are devoted to the Mortuary Temple of Hatshepsut at Deir el-Bahri, with a further four pages on the expedition to the Land of Punt.  The coverage is again of a high standard with multiple diagrams and lots of full colour photographs.  On the other hand the Temple of Seti I merits just two pages, and the Temple of Menuhotep just one.   This, of course, is entirely appropriate to the relative importance of the temples to prospective visitors.  Overall, the coverage of the temples is possibly slightly superior to that of the tombs because the text is marginally more detailed.

Geographically the decision to cover only the East Bank tombs and temples is sensible.  It keeps the book to a manageable size.  However since tourists are clearly one of the target audiences, this may be the guide’s greatest weakness.  Another book will be needed to cover the Temple of Luxor and the Temple of Karnak.  At that point, suddenly Kent Weeks’s more comprehensive offering seems worth considering.  The temples included in the Guide to the Valley of the Kings are: 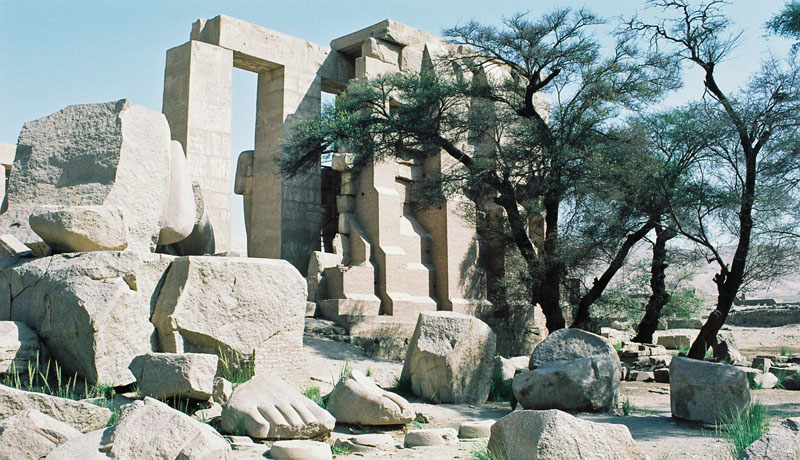 Temple of a Thousand Years - Ramesseum

The strength of the Guide to the Valley of the Kings lies in the emphasis of tomb and temple plans surrounded by photographs clearly tied to the plans.  The format doesn’t just suit the visitor, allowing her to navigate a tomb or temple and see the most important features, it is a useful study reference.  The accompanying text is occasionally superficial, but generally is of a reasonable quality, albeit aimed at enthusiastic neophytes rather than those wishing to study the subject.

The standard of printing in my copy is very high.  It is printed on glossy, perfectly white paper of a considerable weight.  The substantial quality of the paper means that the photographs are reproduced to a high standard and, even if relatively small, are a delight to view.

I think this is a guide which would grace any bookshelf with something for all other than those who know the West Bank intimately.  The text is a good introduction for those new to the subject and/or locale; the diagrams and photographs are valuable for those wanting to study the Theban tombs and temples.  Thoroughly recommended.