Babi: Bull of the Baboons

By Andrea Byrnes. Published on Egyptological, In Brief, 26th July 2012 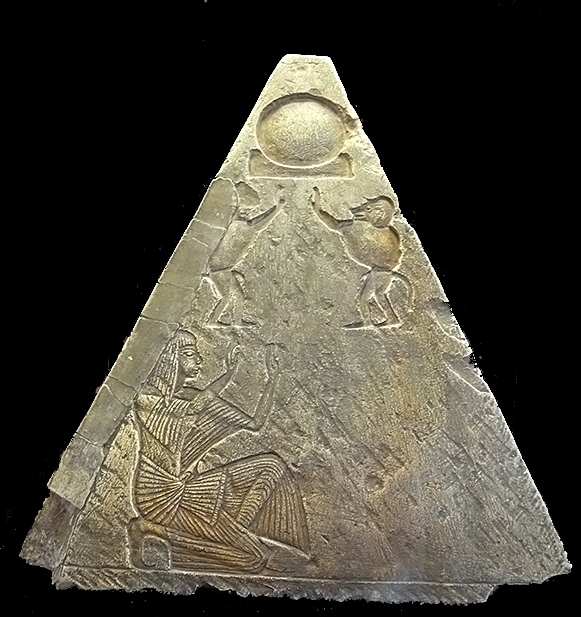 Ferocious and alarming, baboons are amongst nature’s aggressive species.  With vast teeth, which they are all too willing to display, brightly coloured rear quarters and loud, screeching voices, they make an impression.  They are also sociable animals, at least amongst themselves, forming tight family groups and harems.  Amongst their habits is the greeting of the rising sun, on hind legs, with fore-legs raised like arms, as though in praise (figure 1).

The ancient Egyptians were obviously impressed.  Baboons (Papio cynocephalus) feature prominently in their funerary iconography, and three of their major deities were frequently represented as baboons:  Thoth, Khonsu and Hapy.  Others, less well known, also find their way into funerary texts and onto tomb walls, and feature as figurines and amulets:  the Great White One, the eight baboons of the Horizon (sometimes reduced to four or merely two), the four baboons of the Lake of Fire and, the topic of this short article, Babi (or Baba).  Amongst all of these colourful characters, each with a different role to play, Babi is probably the least well known.

Babi attracted no formal cult, so there are no temples to him, and he can be somewhat elusive (figure 2).  His name is spelled in different ways in hieroglyphic texts, for example b3biw, b3b3i, b3bi, bibi and b3b3  and is sometimes shown followed by the white crown and royal whip, perhaps signifying a close association with Upper Egypt, or the determinative for an animal hide, Gardiner’s  F27.

Like all baboons in Egyptian myth, Babi was associated with the sky, and with the passage of the deceased through the netherworld in his quest to become the eldest son of Osiris for eternity.  Babi, however, was amongst the darkest of the baboon deities and a friend to that other troublesome deity, Seth.  In the Pyramid Texts he is described as “red of ear and purple of hindquarters” (Pypramid Text 1349).  There is minimal iconography associated with him.  He is usually shown as a seated baboon with a heavy mane, dog-like muzzle, frequently with a prominent phallus to indicate his virility (figure 3),  but with no features that help to distinguish him from Khonsu or Thoth when those deities are represented in this way.  Only the context and associated hieroglyphs identify him clearly.

Babi, like Seth, was regarded with a mixture of fear, awe, anxious respect and, sometimes, a great deal of hope.  The fear came from his violent nature.  He lived on human entrails, was murderous by nature and controlled the dark.  The awe, perhaps, arose from his importance as the guardian of the gates to the heavens in the Old Kingdom, where his phallus formed the locking bolt, his role as the oldest son of Horus in the New Kingdom Book of the Dead and, in all periods, his exceptional virility.  Anxious not to be murdered and have their entrails eaten, the deceased would cast protective spells to avoid that ghastly fate.  But Babi, like Seth, was not all bad.  He could ward off snakes, calm troubled waters, his phallus formed the mast of the netherworld’s ferryboat and, most importantly for deceased men, he could assist with the provision of sexual abilities in the netherworld, something not to be left to chance.  So, like many deities in the ancient Egyptian pantheon, he was very much a mixed blessing. 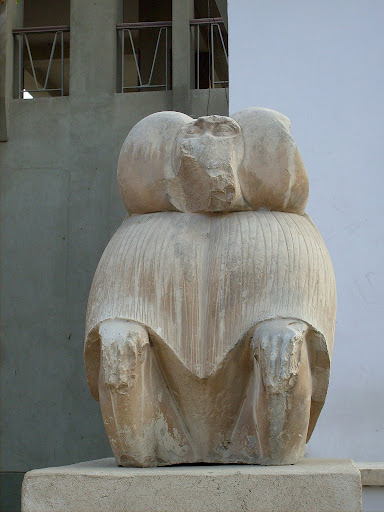 Baboon representations are known from as far back as the late Predynastic, where figurines appeared in shrines and, like the Great White One (Hedj-wer), Babi is an ancient deity.  He is mentioned in a number of spells in the Pyramid Texts, often as an aggressor to be feared, but sometimes providing assistance to the king.  He is the “master of darkness,” the “bull of the baboons” (roughly translated as alpha male) and the guardian of the sky, a powerful entity.  And he is not above behaving badly: in Pyramid Text (PT) 1349 he steals the offering of his goddess, and is berated for it in a protective spell: “Get back, Babi, red of ear and purple of hindquarters! You have taken the thigh-joint of your goddess to your mouth!” As the bolt on the doors to heaven, however, he could open the skies to the king, enabling the ruler to take his place amongst the stars: “The phallus of Babi is drawn back, the doors of the sky are opened, the King has opened [the doors of the sky]” (PT 502).  The Pyramid Texts, exclusive to royalty, indicate that even the monarch had reason to fear Babi, or at least to ensure that he was managed via spells.  In George Hart’s words, Babi “represents supernatural aggression to which the monarch aspires” (2005, p.44), and the king sought Babi’s virility too.  As such, in PT 516, “the King is Babi, Lord of the night sky, Bull of the Baboons, who lives on those who do not know him”.  Babi was also called upon for his protective abilities, to preserve the king from snakes:  “May the wfi-snake be got rid of; cause me to be protected” (PT 419). Finally, in the king’s ascension text (PT 1310), where all the parts of his body are assigned to different deities (his head is a vulture, his face Wepwawet and his nose Thoth), the king states that his fingers are Babi.  [All Pyramid Text spells are from Faulkner 1969].

In the Middle Kingdom Coffin Texts Babi appears frequently, identified as the eldest son of Osiris and an enemy of Seth (Coffin Text 359), a far more amenable character all round.  By identifying himself with Babi, using the simple technique of naming himself as Babi in the spell, the deceased gained power over water (CT 361).  The identification of various parts of the anatomy of Babi with the ferrbyboat in the netherworld is described in Spell 397.  The ferryboat has been taken to pieces and must be rebuilt.  The mouth and ribs of Babi have roles to play in this rebuild, but the most important contribution is his phallus.  So in Spell 397 we have:

“The weather is windy and she has no mast.
Fetch me the phallus of Babi which creates children and begets calves.
To what shall I fasten it?
To the haunches which seperate the shanks”

And in CT 398 a description of the ship includes the simple statement “her masthead is the phallus of Babi.” In this spell  the ferryboat’s intjw are the armpit of Babi too, and her nfw the weakness of the arms of Babi.  In short, Babi’s anatomy was apparently very well used by the builders of the ferryboat.  It is in the Coffin Texts, too, that Babi’s sexual abilities are praised by the deceased, and adopted by him for his own activities in the afterlife:  “Copulating by a man in the realm of the dead.  My eyes are the lion, my phallus is Babi . . . As for any man who shall know this spell, he shall copulate in this land by night and by day, and desire shall come to the woman beneath him whenever he copulates” (CT 576).  That particular spell was to be recited over a bead of carnelian or amethyst, which was to be placed on the right arm of the deceased.  [All texts taken from Faulkner 1973]. 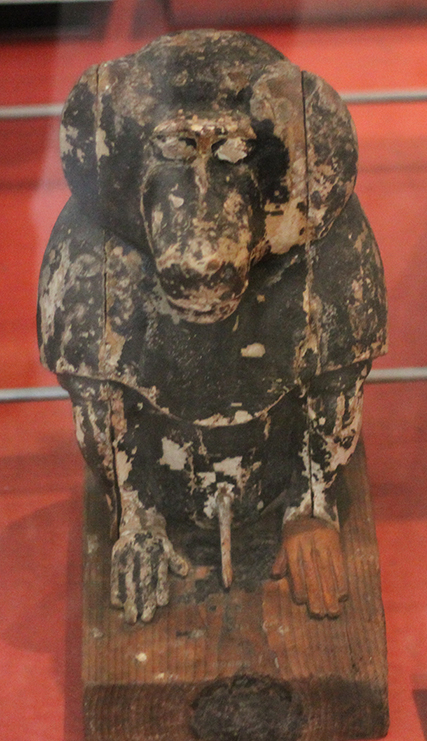 Figure 3. Baboon from the tomb of Horemheb, in the Vally of the Kings, possibly representing the deity Babi

By the New Kingdom Babi was no longer as prominent, but seems to have been re-endowed with some of his earlier associations as a dark presence in the netherworld.  In the Book of the Dead he was the first-born of Osiris and guardian of the entrance to the afterlife, but he had other roles.  In Spell 18, for example, Babi is, along with Shu, Re and Osiris, one of the princes of the underworld named Anrutef and attends a tribunal in which the deceased is defended against his enemies, but his main appearance is to be found in some versions of the all-important Spell 125, the Weighing of the Heart ceremony.  After the negative confessions were made the deceased then addressed the great court: “Save ye me from Babi who lives on the entrails of the great, on that day of the great reckoning” (Breasted 1972, p.303).  It is clear that Ammit was not the only monster for the deceased to fear during this vital ceremony.  It should be noted though, that it is not Babi but Thoth or Khounsu who sits atop the scales in the Weighing of the Heart ceremony.  Conversely the deceased must associate himself with Babi, in some versions of the Book of the Dead, in order to reach his ideal status, transformed from the judged deceased person to become a son of Osiris. In this process of transition, in a typically convoluted way, the deceased must first become Babi (the oldest son of Osiris), only then undergoing another transition to enjoy eternity as a son of Osiris.

In the Contendings of Horus and Seth, he has a minor but entertaining role, stirring up trouble with the deity Ra, telling the great sun god “No-One cares what you think – you are a worthless god with no followers and your shrine is empty!” Tyldesley 2010, p.135), a terrible insult leading to Ra’s departure in high dudgeon until he can be lured back by his daughter Hathor.  The Babi who stole from the goddess in the Old Kingdom Pyramid Text is as troublesome in the New Kingdom as he was in the Old.

In conclusion, even though Babi shares various features with other baboon deities, in particular concerning his roles of guardianship and his connections with the sky, his early incarnations were particularly dark, making him a Seth-like personality with only few redeeming features.  In the Middle Kingdom he was a more helpful deity, but in the New Kingdom he is once again a rather ominous figure. Throughout his career he was a threat to the deceased, royal and non-royal alike, a supernatural entity against whom it was necessary to guard with spells.   It makes sense that Babi and Seth were sometimes identified with each other in later periods.

Image 1, Baboons carved onto a pyramidion, Brussels, by Andrea Byrnes

Image 3, A possible representation of Babi from the tomb of Horemheb, British Museum, by Andrea Byrnes

Budge, E.A.W. 1904, The Gods of the Egyptians: or Studies In Egyptian Mythology.  Volume II, Methuen

Wilkinson, R.H. 2003, The Complete Gods and Goddesses of Ancient Egypt, Thames and Hudson