Browsing: Home / 2012 / November / 14 / Review of Tutankhamun and the Golden Age of the Pharoahs: A Souvenir Book

Review of Tutankhamun and the Golden Age of the Pharoahs: A Souvenir Book

Published in Egyptological, In Brief, November 14th 2012.  By Kate Phizackerley 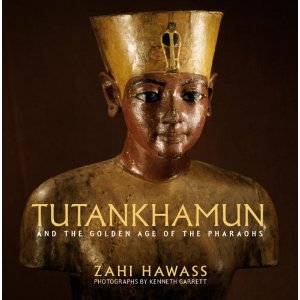 Tutankhamun and the Golden Age of the Pharaohs: a Souvenir Book

There is an official companion book to the exhibition and this souvenir book, a small format volume of 64 pages.  At 15.5cm by 15.2cm (about 6”) it is oddly not quite square.  It is easily available for one penny (or one cent) second hand on Amazon, but is it worth it if you have not seen the exhibition?

It is published by National Geographic on high quality paper stock that supports a good standard of reproduction for the photographs.  The text is credited to Dr Zahi Hawass.  Now when I read Michael Palin I can hear him reading the material.  It is entirely consistent with his work as a TV Presenter.  Closer to Egyptology, I would say the same, for instance, of John Romer.  It is a sense I don’t get with this book at all.  I have often watched Zahi on television and he doesn’t sound anything like the writing here, although phrases such as “My team was completely Egyptian” are clearly authentic Zahi.

Surprisingly perhaps, the text is somewhat more considered than Zahi on television.  Instead of simply stating a belief that Tutankhamun was killed by an infected leg wound, the text is surprising balanced and concise.  It suggests that the break in the lower left femur occurred either shortly before death (there is no sign of healing) or during embalming.  It cannot have been broken in modern times, Zahi explains, because embalming fluid seeped into the break, although he is not shy about criticising Carter’s handling of the mummy and blaming him for many other breaks.  Perhaps surprisingly then, the rather brief text can have some value even to those who already have books about Tutankhamun in their library.

The text is written in very short chapters, generally two or three pages long, and interspersed by photos:

The first two chapters are material which will be entirely familiar to anybody who has read about Tutankhamun and the 18th Dynasty but in a volume of this nature it could be a useful primer for some readers.   The third and fourth chapters cover the recent examinations of Tutankhamun’s mummy and Hawass’s revised theories concerning the death of the king (which may, or may not, be correct).  The material in these later chapters is not in many older texts and can be a useful supplement to bring your library up to date without adding a more expensive biography.

The photographs are credited to Kenneth Garrett although some are clearly by other photographers.  I never tire of seeing photographs of items from Tutankhamun’s tomb and each book seems to select a slightly different set of items to show.  For instance the book has a photograph, by Kenneth Garrett (p49) of a stunning cosmetic jar surmounted by a recumbent lion.  The caption reveals that it was found to contain “a mixture of animal fat and vegetable resins”.  Most of the other photographs of items from KV62 are of items in gold or gilt.  I would personally prefer a greater variety but as a small, souvenir exhibition book the coverage is what most original purchasers would expect.  Some of them are also somewhat darker than I might prefer.

The exhibition also included a small number of items from other Amarna era tombs and photographs of some of these are also included, such as a canopic jar lid from KV55 and a couple of Yuya’s shabtis.  These are nice, but will I ever remember that they are in this book if I search my library for them?

Rather more to my taste – though perhaps not to all – are photographs of the CT scans.  Personally I could, however, have done without the reconstructions of his face because I prefer not to mix actual artefacts with modern fabrications in the same book.  Again though, others feel that reconstructions bring Tutankhamun to life.

My favourite photograph is  a black and white showing the necropolis seals intact on a rope, sealing the second of the four nested shrines.  The detail is exquisite.  For me, although taken nearly 90 years ago on film, it is the best photograph in the volume.

In short then, this is a surprisingly good book for something so small.  It would suit somebody with only a casual interest in Tutankhamun and requires no great amount of space.  For anybody with a serious interest in Tutankhamun’s tomb, the photographs are likely to be worthwhile additions to the collection, even if few are unique or unusual.  It was much better than I had expected.  I recommend it without hesitation.