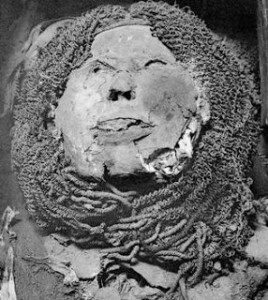 By Kate Phizackerley. Published on Egyptological, In Brief.  June 16th 2014

I have a fascination with the queens of ancient Egypt. If the popular literature is to be believed, only Hatshepsut and Cleopatra were of any particular interest, with other queens relegated to mere adjuncts to their husbands or fathers.

I have previously written about Merneith, possibly the first female ruler of Egypt, although I noted that Neithotep was an alternative candidate for that accolade.  When I read on the Michael Carlos Museum site that, “[Henuttawy] could be seen as the Eleanor of Aquitaine of antiquity!”, how could I resist?  But does Henuttawy merit comparison which such an illustrious Mediaeval queen?

As Brian Alm pointed out recently in Confessions of a Part-time Lecturer to Newcomers in Egyptology: Cheops or Khufu? there are typically many variants of Egyptian names.  In contemporary sources, Henuttawy largely escapes such variation, although the “u” is sometimes dropped and the use of “Duathathor” is rare.  Smith refers to her as “Queen Honittaoui”, but this spelling now seems to be archaic.   The unwary should however beware the number of other noble women and queens who have shared the same name.  Our Henuttawy, denoted “Henttawy Q” by Dodson, lived during the 21st Dynasty and should not be confused, for instance, with the 19th Dynasty Henuttawy, daughter of Ramses II who is buried in tomb QV73 in the Valley of the Queens.

Queen Duathathor-Henuttawy’s mummy (referenced CCG 61090 in the collection of the Egyptian Musuem, Cairo) was found in the Deir-el-Bahari cache DB320.  Her original burial location is unidentified. Her mummy was found in an 18th Dynasty coffin (Bickerstaffe, 2009) which is clearly too long for her.   Details of the original owner had been stripped.  It is unknown whether she was buried in this coffin or moved to it when her mummy was transferred to the cache. Mummification is rarely flattering, but she has a most distinctive mummy.  The face was stuffed to give it an unusually broad, jolly, and youthful appearance.  It seems likely that this was a genuine attempt to portray how she looked in life.  Having examined her mummy, Smith describes her as “very plump”  and having “very large, full, pendant breasts” but with “small, well-proportioned features”  In fact her face was overstuffed and burst over the centuries necessitating modern restoration.  There is a theory circulating that the queen’s face only burst when exposed to damp air after removal from the cache, with the moisture attracted to the embalming salts.  Smith who examined her mummy in 1909 makes no direct mention of this theory of when the damage occurred, but identifies two causes: the “deliquesence” of the salts and fats used, together with the “exceptionally large quantity of stuffing” used.  (For those unfamiliar with the word – I had to look it up – the Oxford English Dictionary  defines “deliquesce” as “”to melt and become liquid by absorbing moisture, as certain salts, etc do”.)  The stuffing in her face was an odd mixture of soda and fat, possibly butter, which has a “cheese-like” quality.  There is also a large whole in the thorax and abdomen made by ancient tomb robbers.

Where 18th Dynasty mummies were often resin-coated, Henuttawy’s was painted with yellow ochre and her lips in red.  There was also an inner layer of fine red linen beneath the more usual white layers, a practice associated with several 21st Dynasty burials. Writing generally of 21st Dynasty mummies rather than Henuttawy specifically, Smith wrote:

The body was painted with red or yellow ochre and gum just as the statues used to be treated: artificial eyes were inserted; the cheeks and neck were filled out with stuffing; the forms of the trunk and limbs were restored; and the viscera, which it had been customary to set apart in four Canopic Jars, were now restored to the body to make it whole and complete.

Few of her funerary goods have been found other than a large collection of shabtis dispersed across museums worldwide.  These break with earlier traditions and clearly depict female servants.  The most important item is probably a 108mm x 75mm gold plaque found still tied to her chest with string, covering a mummification incision.  Why the ancient tomb robbers who desecrated her mummy left such a valuable item on her body is something of a mystery.  The plaque lists many of her titles such as “Daughter of the Great Royal Wife” and “Royal Mother”.

Owner: Henuttauy, wife of the High Priest Pinedjem I.

What is more certain is that she married King Pinedjem I, High Priest of Amun in Thebes (Luxor) and founder of the 21st Dynasty.   She is apparently mentioned before Pinedjem took the throne on a chalice from Tanis (Dodson).  There are a number of mentions at Karnak of which the most notable is a large bas relief on a pylon at the Khonsu temple, paired with Maatkare who may have been a co-wife or possibly her daughter.   Henuttawy had a number of children including Pseusennes I, the third king of the 21st Dynasty and again is mentioned on objects found in his Tanis tomb.   (Dodson recognises this maternity but confusingly styles Pseusennes as Pasebkhanut I.  He further suggests that Pseusennes was married to one of Hanuttawy’s daughters, Mutnodjmet.)  She was also mother of an unidentified Priest of Amun.

None of this research explains why the Michael C. Carlos Museum liken her to Eleanor of Aquitaine.  Her titles included King’s Daughter; King’s Wife; King’s Mother; Lady of the Two Lands; Mistress of the Two Lands; Daughter of the Great Royal Wife; Foremost Singer of Amun; Mother of the Great Royal Wife; Mother of the High Priest of Amun; Mother of Generalissimo.  These at least testify to her status, firstly as daughter of Ramses XI’s Great Royal Wife, and as King’s Wife and King’s Mother.  The latter, unless awarded posthumously, suggests she outlived Pinedjem I.  Smith notes that her mummy is of an apparently young woman (and her full breasts suggests she may still have been nursing when she died).  As well as her general appearance, teeth – presumed to be hers – were found insider her body cavity with wear consistent with death as a young adult.  Pseusennes was an old man at death and, even allowing for a reign length thought to be between 46 and 51 years, was probably a teenager or in his early twenties when he took the throne.   Hanuttawy cannot therefore have lived through more than a few years of his reign.  Unless she served as regent – and there is no evidence that she did – it is doubtful who much influence she can have had during the reign of Pseusennes.  So, while her offspring formed a dynasty controlling the major power centres of Tanis and Thebes, and throne and temple, there is very little evidence to suggest that Hanuttawy herself had any pivotal role in the re-unification of Egypt.  Possibly she did, but on the basis of my research I have sadly found no direct evidence to support a likeness with Eleanor of Aquitaine.

Alm, Brian, Confessions of a Part-time Lecturer to Newcomers in Egyptology: Cheops or Khufu?, Egyptological In Brief, 25th April 2014, http://egyptological.com/2014/04/25/confessions-of-a-part-time-lecturer-to-newcomers-in-egyptology-cheops-or-khufu-12108