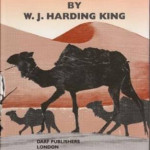 William Joseph Harding-King was educated at Trinity College, Cambridge. His first journey into the Sahara took place in 1900, after which he published his book In Search of the Masked Tawareks. He returned to the Sahara again in 1908 and then again between 1909 to 1912. His contributions to a number of journals represented a significant contribution of knowledge to desert studies and he was awarded the Gill Memorial Memorial Medal by the Royal Geographical Society in 1919. Mysteries of the Libyan Desert was considered to be his most important book. END_OF_DOCUMENT_TOKEN_TO_BE_REPLACED 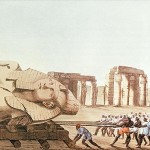 The early explorers of Egypt, often associated with ideas of adventure, discovery and buried treasure, fascinate many people interested in the earliest days of Egyptology. No name elicits a stronger, and often negative reaction from scholars than that of Giovanni Belzoni, who explored Egypt in the early 1800s. Belzoni has often been depicted as a villain, an irresponsible treasure hunter who destroyed valuable antiquities as he blazed through Egypt in a search for gold. It is this image of Belzoni that forms many people’s preconceptions. END_OF_DOCUMENT_TOKEN_TO_BE_REPLACED