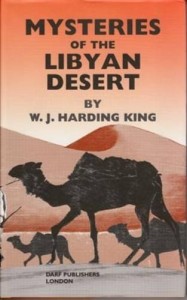 William Joseph Harding-King was educated at Trinity College, Cambridge.  His first journey into the Saharatook place in 1900, after which he published his book In Search of the Masked Tawareks.  He returned to the Sahara again in 1908 and then again between 1909 to 1912.  His contributions to a number of journals represented a significant contribution of knowledge to desert studies and he was awarded the Gill Memorial Memorial Medal by the Royal Geographical Society in 1919.  Mysteries of the Libyan Desert was considered to be his most important book.

“I had had some experience of desert travelling in the Western Sahara, so when, in 1908, I wrote to the Secretary of the Royal Geographical Society, suggesting a journey into the Western Sahara, and received a letter in reply proposing that I should tackle the Libyan Desert instead, as offering the largest available area of unknown ground, and should take up the study of sand dunes, for which it afforded an unrivalled opportunity.  I jumped at the suggestion, which had not before occurred to me.  But after a jump of that kind one usually comes to earth again with something of a bang, and when, after making a more thorough enquiry than I had previously done into the nature of the job I had undertaken, I began to realize its real character and felt that in saying I would tackle this part of the world, I had done something quite remarkably foolish.”

His book was published in 1925 and Darf Publishers have made this modern facsimile of his travels in 1909 and 1912 available to a modern audience, published in 2003 with the cover shown here.  I particularly like the opening lines in Chapter I:  “Of the making of books on Egypt there is no end.  The first on the subject was Genesis, and there has been a steady output ever since.”

The inclusion of the word “mysteries” in the title implies that the contents will be littered with colourful prose highlighting the romance of desert travel, but this is far from the case. Harding-King writes in a modern prose style and although he carries the reader along with him, what he conveys is not a voyage of romance but one of serious inquiry and investigation.  His accounts are rich in detail about both the people he meets and hires, and the places he visits.

“The bedawin, accustomed to travelling over the wide desert plains, from one landmark to another, keep their eyes largely fixed on the horizon. You can always tell a desert man when you see him in a town.  He is looking toward the end of the street, and appears to be oblivious of his immediate surroundings.  This gives him that “faraway” look that is so much admired by lady novelists.  It would be rash, however, to assume that a desert guide does not also notice what is going on around him, for there is very little indeed that he does not see.”

He begins his travel into the desert from the southern oases – Kharga, Dakhleh and Farafra. The residents are a mixture of fellahin (farmers), bedawin (nomadic Bedouin) and various officials and professionals from the Nile. In these somewhat remote areas the administration was run by officials sent to the oases usually as a punishment for transgressions in Nile-side towns. As a European, Hardking-King was something of a curiosity, particularly in Farafra, and received varying degrees of welcome as he sought accommodation, looked for camels for his caravan, and hired for each expedition a desert guide, a translator, a cook, and camel leaders. 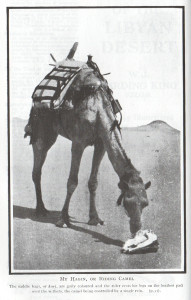 He introduces the reader to the complex religious beliefs, political ambitions, secrecy and traditions of the Sanussi sect who had zawiya (monasteries) on the edge of the Egyptian desert in order to make converts of local people. At the time the Sanussi were powerful with national-scale political hopes, and were a force to be reckoned with. They were strongly opposed to European investigations in the desert between Egypt and Libya and caused various problems for Harding-King.  They later pushed forward to Marsa Matruh on Egypt’s Mediterranean coast, and were considered a sufficient threat to Egypt for a desert unit to be established to protect against them.

The descriptions of the desert and of the practicalities and risks of travel by camel caravan are excellent. Travel over large distances was often accomplished during the night in order to avoid the heat, and the description of this mesmeric experience alone is exceptional. The journey to map of the desert included numerous surprises involving both the nature of the desert itself and expectations raised by previous visitors.This is the earliest reference I have seen so far to the “lost oasis” of Zerzura in a Western text.  Treasure-hunting books in Arabic were very fashionable in Egypt at the time, and  Zerzura was one of the places mentioned, a fabled lost oasis in the desert with hidden and untold wealth. Harding-King was at best ambivalent about these books. He dismissed their value for locating treasure but was open minded about their potential as guides to old roads and unrecorded oases.  He found it useful to encourage speculation that he was actually hunting for Zerzura:

“Knowing that many of the natives in Dakhla suspected me of being engaged on a tresure hunt, and of looking for the oasis of Zerzura, I had played up to the theory by continually asking for information on the subject.  On our return from such a long journey into the desert several natives, assuming that we must have found something, came round to enquire whether I had actually found the oasis.  Khalil, who had heard the account in the ‘Book of Treasure,’ called my attention to the fact that the road we had followed on our return journey, until it lost itself in the sand dunes on the outskirts of Dakhla, at that time was leading straight for  the Der el Seba’a Banat, and gave is has his opinion that, if we only followed the road far enough in the opposite direction, it would be bound to lead us to Zerzura.”

The stories, however, of the activities of his men in Farafra digging down into archaeological sites to find the promised treasure, collecting coins and throwing mummies haphazardly to one side are quite simply hair raising!

There is a lot of humour throughout the book.  Harding-King was very aware of the funny side of many of his experiences.  He provides a lovely story about his hagin (riding camel):

“The storm I have described was certainly unpleasant but it had one compensation – Musa left his reed flute lying on the sand and my hagin promptly ate it!  That camel seemed to be omnivorous.  Feathers, tent pegs, and gun stocks all figured at various times in his bill of fare.  But bones were his favourite delicacy;  a camel’s skeleton or skull by the roadside invariably drew him off the track to investigate, and he seldom returned to his place without taking a mouthful.  In consequence, among the numerous names by which he was known in the caravan – they were all abusive, for his habits were vile – was that of the ghul, or cannibal.”

Life in the oases could clearly be dull over long periods but Harding-King rarely had to contend with any sort of tedium. The towns and villages of Dakhleh Oasis, lying between Egypt and the Sanussi, were frontier places of extortion, sabotage, petty disputes, fanaticism, intrigues, espionage and a never-ending change of key personnel in administrative and professional roles. Harding-King gives several accounts of his own personal experiences of such cases, demonstrating how close to disaster he occasionally came due to the machinations of the Sanussi rather than to the threats and risks imposed by desert travel.

“The Senussi had always been a nuisance to travellers wanting to go into their country.  it was, however, difficult to see what they could do.  They would not, I thought, dare to do anything openly in the oasis and, by getting rid of the two of of their three camels I had rather tied them up for the time being, as far as the desert was concerned.  So I went on with my preparations for our final journey with a fairly easy mind, making the fatal mistake of underestimating my opponents.” 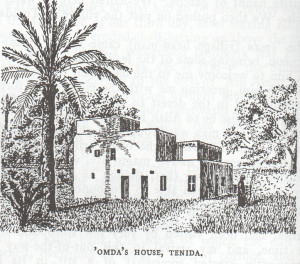 The house of the Omda

Harding-King’s references to the various characteristics of “natives” may stick in the gullets of some but he is considerably more open-minded by comparison with some of his contemporaries and his occasionally irritable observations are clearly drawn from experience, not prejudice.  His descriptions of local customs and traditions are detailed, objective and full of genuine interest.   They are a valuable record of oasis life as Harding-King found it in the early 1900s, isolated as it was from the Nile Valley.

Harding-King finishes his book with a summary of the results of his expedition, a long chapter on his observations about customs, superstitions and magic (truly riveting stuff), another on natural history (an excellent reference even today) and a set of very useful appendices: The geography and winds of the Libyan Deserts; Insects collected in the Libyan Desert (using Latin nomenclature); Rock inscriptions from the Libyan Desert (marks rather than “art”).

100 years later things have of course changed.  Harding-King predicted in his preface that cars, “only recently invented”, would eventually become efficient enough to cross the desert, but he regarded this prospect with regret. He called them “prosaic mechanical aids” and observed that “speculation is so full of fascination, that it seems almost a pity that those problems should ever be solved.” Harding-King was headed for Uweinat but never got that far. I’ve been there several times, heading out from Dakhleh as he did, but in vast Toyota Landcruisers armed with GPS and satellite phones. A different world indeed in some ways. But at the same time there is much that hasn’t changed and is still perfectly recognizable in Harding-King’s text. Villages and buildings, cultivated fields and even the people living in the oases are all familiar, and the desert is just as Harding-King described. Many of the customs and traditions remain, and the wildlife that he describes still occupies the desert areas. The archaeological monuments are now protected and the Sanussi have returned to Libya, but so much else remains the same.

The Descent into Dakhla

There are three good maps, one in colour, and two of which fold out, and there are some excellent black and white photographs and illustrations, which were the work of Harding-King showing people and places, with explanatory captions. These really draw one back in time and give an insight into his world and his activities. An index completes the book. Some of the original adverts for other books in the same series are also printed in the book, and some of them are simply mind boggling.  These are a useful reminder that although this really was an age of exploration it was also an era where colonialism carried with it some ideas which are simply unacceptable to most modern western minds.  Harding-King is remarkable in his lack of prejudice in an era that specialized in it.

This is a super book, well written, very involving and a good resource for anyone interested in the exploration of both the oases and the desert in the early 1900s. 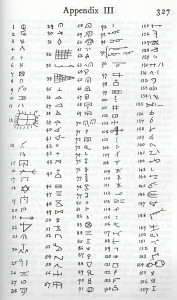