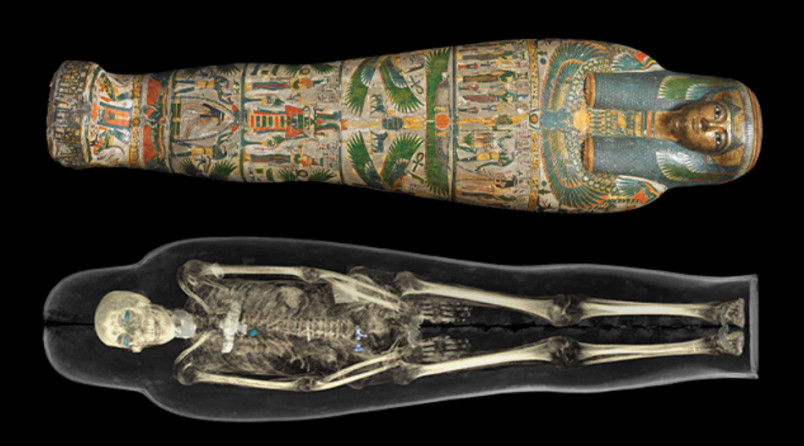 When I arrived home after visiting and enjoying Ancient Lives, I found that a friend who has also visited the exhibition that day, at a different time, had sent me an email.  It said, quite simply, “I’m afraid I’m not very interested in mummies, although the 3-D displays were good.”  As a review it was wonderfully succinct, but it did throw up a few questions, the most obvious of which has to be: if you are not very interested in mummies, what might you get out of Ancient Lives?  So this review takes into account that there are both those potential visitors who do and those who do not have an interest in mummies, and that both might want to know whether this exhibition is worth their time. 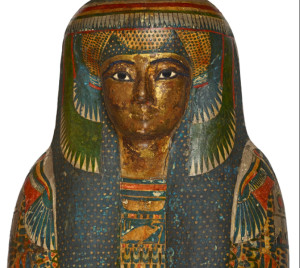 Mummies, from the the Arabic mumiyah (bitumen), are the preserved remains of the dead.  Some early examples are naturally preserved by the effects of the hot sand that came directly into contact with the deceased, others are deliberately mummified through an elaborate process that took many weeks.  The term “mummification” refers to the body itself, the fact that it was preserved, the ways in which it was preserved.  It does not refer to the coffins and sarcophagi that made up the containers that were designed to hold and preserve the mummies.  There is, however, a direct relationship between the mummified body and its containers, the associated grave goods and (in some cases) the tombs that acted as the ultimate container.   This relationship lies in the very specific belief in how the afterlife was structured and how the living person had perceived this afterlife before died.  In a simplified form, mummification was the means by which the dead were preserved so that they could walk into the Netherworld, negotiate its dangers and find eternal happiness.   The coffins were painted with prayers and images that were specific to the afterlife and would help the dead transition from one state to another.  In the Third Intermediate Period, from which the majority of the coffins in this exhibition were derived, the coffin decoration became incredibly elaborate.  Even in the Graeco-Roman period, there was usually a relationship between the outer coffin and the needs of the person inside, even though the artwork and iconography was often very different.  In  most cases, grave goods reinforced those statements, again linking the dead person to the afterlife that they hoped for, connecting them to their vision of eternity.  The emphasis of this exhibition is, of course, on the mummies themselves, but it ties them in with coffins and grave goods.

The first mummy in the exhibition is one of the individuals who were buried in a 5000 year old cemetery at Gebelein, north of Esna.  If you have visited the Egyptian galleries on the first floor of the British Museum you will almost certainly have seen Man A or “Ginger,” one of the other people buried in the cemetery.  This young male (25-30 years old) is known as Man B.  Buried in a crouched position, legs bent in towards his torso, hands before the lower part of his face, Man B was not the result of deliberate mummification but was mummified due to the natural desiccation of the arid environment in which he was deposited.  Hair, nails, beard and skin were preserved as well as pieces of fabric.  When was placed under the scanner a lot of biological information was retrieved, indicating his health during life, his height, and his age at the time of death.   The images taken by the scanner were projected onto the wall, and this projection shifted through different layers and features, an endlessly morphing segue from outer levels to inner organs and even the man’s last meal. 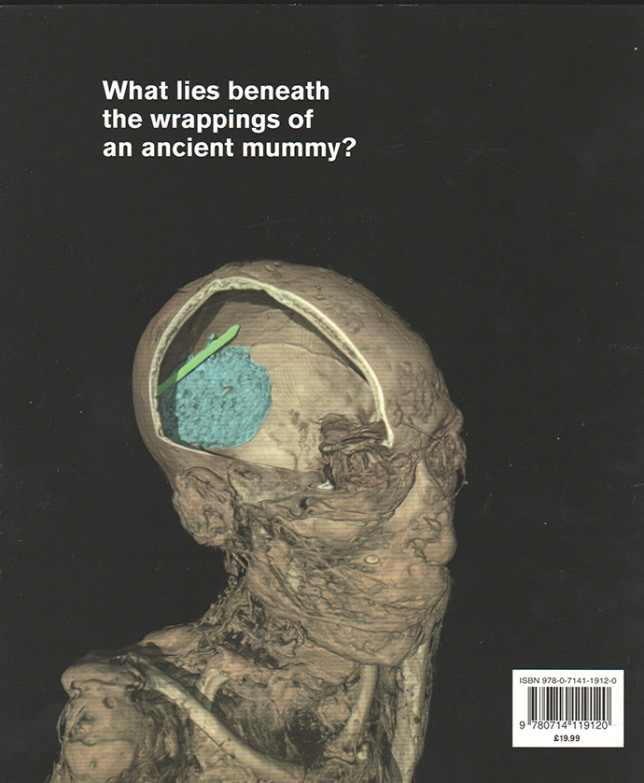 Back cover of the Ancient Lives exhibition book showing a skull with an embalmer’s tool left within the brain residue. EA22814

By taking scans of mummies, the highly invasive and destructive process of unwrapping them is avoided, whilst still providing a remarkable amount of information about what was contained beneath the wrappings.  Comupterized axial tomography (also known as CAT or CT scanning) uses X-ray technology to pass around the body taking 1000s of scans, image slices through the entire body, which are assembled by computer to form a 3-D representation of the body beneath the wrappings.  Slices can be analyzed individually in order to understand individual features, or seen together to see how different elements fit together.  As CT scanning technology continues to improve, even greater detail can be retrieved, providing even more data for examination.

The projections of the numerous layers of imaging taken of each mummy, from outside coverings to inner interstices, mesmerized visitors of all ages.  Some of the images were a constantly changing series of shots, fading into each other seamlessly, showing biological features like the brain, bones and teeth, as well as items inserted into and beneath the bandages.  Features of interest, like dental abscesses, an embalmer’s tool left in one skull, the supports inserted to correct a damaged skeleton in another, amulets, artificial eyes, pieces of gold leaf, packing materials and organs were picked out in colour, and sometimes given textual labels.   Incisions made during the process of mummification were also highlighted clearly. Some of the scans could be manipulated manually via a wheel at waist-level, so that the visitors had control over the speed at which the image was viewed.

The eight mummies in the exhibition date from c.3500BC to c. AD700 and come from a number of locations from Lower Egypt in the north to the Fourth Cataract in the Sudan.  The youngest of the mummies was a child of around 2 years old.

The eight lives represented by the exhibition

Some of the scans shown are from mummies placed within coffins that were on display.  The coffins, most from the Third Intermediate Period, are all brightly coloured and full of imagery.  The hieroglyphs on some of the coffins, which provide prayers and spells, are not translated in the exhibition, but the labels on these and other exhibits do make it clear that the preservation of the deceased and its presentation in the afterlife with burial equipment were equally important for a successful transition to the afterlife.  It is clear that not all bodies ended up in the right coffins, but this is in itself an indication of the importance that some Egyptians assigned to associating a mummy with the prayers and spells that were designed to protect it.    Of the four coffins, only one dates to the Roman period.  This, the mummy of  a child, provides the child with a golden mask with short curly hair and a spray of moulded plaster flowers in one hand, and images from Pharaonic mythology on the linen cover, combining elements from Egyptian and Roman styles and ideas. 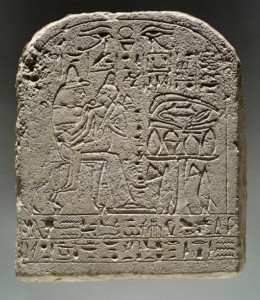 The objects to accompany the mummies and coffins were well chosen, consisting of both grave goods and items from everyday life, again emphasizing the links between life and the afterlife.  Everything from specimens of bread and fruit  to funerary stelae, amulets and papyri were on display. Health, illness and protection were recurring themes and these are reflected in the objects.  There was a particularly stunning Late period basalt statue of a priest holding a cippus with the god Horus the Child standing on crocodiles and grasping snakes, which was borrowed from the Louvre (E10777).  Incised all over with hieroglyphs, it is remarkably beautiful.  Statues of this sort were thought to be medicinal, with healing powers.  A section of the London Medical Papyrus showed prescriptions for treatments of ailments, and   amulets scanned in remarkable detail in  some of the mummy wrappings were given real life counterparts in the exhibition – tiny objects in a variety of stones all the shape of protective symbols.  To accompany the Roman child there were objects from Roman daily life that referred particularly to children – a wooden toy horse on wheels, a child’s sandals, a funerary stela dedicated to a boy named Merysekhmet, and a pair of silver bracelets made for a child.  To accompany the mummy and coffin of a temple singer were items relevant to her trade:  a pair of bone clappers, a harp and a relief from Hatshepsut’s Red Chapel showing dancers, sistrum players and a harpist.

Parents might wonder if this is a suitable exhibition for children, and it is difficult to answer that question.  It would depend very much on the child.  There were children there when I was visiting at half-term, and they were enjoying it very much.  The British Museum’s permanent display of Ginger on the first floor has never seemed to be without a crowd of children surrounding him.  Two of the mummified bodies are without wrappings, showing skulls, bones, teeth and skin, hollow eye sockets.  These are perhaps not for the squeamish of any age, but it is all beautifully presented, and the emphasis is on education and information, on understanding the person that the remains represent.

The exhibition was incredibly busy.  The combination of the small size of the exhibition and the popularity of mummies in general means that this Ancient Lives was never going to offer visitors peace and intimacy.  It was often necessary to wait patiently for people to move on so that display cabinets could be seen, and movement was a matter of edging around groups of people.  Although I had arrived at 11am I was waiting for someone and I eventually went in at 12.10.  My conversation with the girls on the entrance at 11am, when there were no queues, made it clear that the earlier you can get there after it opens the better – the later it gets the busier it gets and by the time I went in there was a small queue of people having their tickets checked. 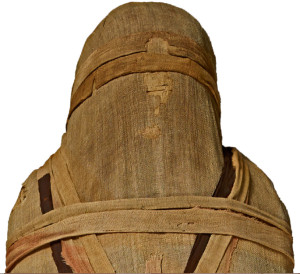 The official book that accompanies the exhibition is Ancient Lives. New Discoveries. Eight Mummies, Eight Stories is by John H. Taylor and Daniel Antoine (The Trustees of the British Museum 2014).  For the duration of the exhibition it is at a reduced price when bought from the British Museum.  It follows the same format as the exhibition, showing CT Scans, mummified remains, coffins, grave goods and related objects, with explanatory text to pull all of this into context.  It also offers a history of mummy examination,  looks at how the mummies on display where acquired and explains how non-invasive techniques work.  If you are interested in the results of CT scans and the insights they offer, this is an excellent reference.

In conclusion, the Ancient Lives exhibition is not just about mummies and even those who have no interest in mummies will find a lot to interest them here.  It is also about both the living version of the person and the life that they hoped for in the Netherworld.  Ancient Lives lets the visitor see a tiny bit of each individual life by presenting data from analysis of the mummies, and at the same time never lets the visitor forget what the living person had hoped for in the afterlife, the challenging Netherworld where spells were needed and the deities had to be appeased.  When we look at the the remainder of the physical person beneath the bandages, we are also looking at what is left of the person’s physical presence in the world, their aches and pains, their causes of death and even their hopes and beliefs.  When we look at the coffins and the grave goods we see into their hopes and dreams for a life after death.  Between the mummy and the coffin, we are able to form an impression of a once very real person.

All images on this post are taken from the British Museum website and are copyright of the Trustees of the British Museum, except for the third image, which is a scan of the back of the Ancient Lives exhibition book.