In the last week of March 2011 an UNESCO team visited Egypt to meet with the new Minister of Culture and try to understand the state of the country’s antiquities following widespread reports of vandalism, theft and looting. Egypt has seven World Heritage Sites: six cultural heritage sites and the fossilized mangroves of the Faiyum’s Whale Valley. END_OF_DOCUMENT_TOKEN_TO_BE_REPLACED 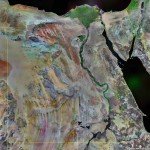 “Space Archaeology” is the new buzzword adopted by the BBC in its documentary “Egypt’s Lost Cities.” Not to be confused with the branch of archaeology studying orbiting space debris, it describes instead the use of satellite images to locate archaeological remains beneath the earth’s surface. END_OF_DOCUMENT_TOKEN_TO_BE_REPLACED