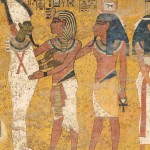 The closure of the tomb of Tutankhamun, to be replaced by an exact facsimile, has been much reported in the UK media and highlights a number of issues and raises some interesting questions. Although this is largely a discussion about the tomb of Tutankhamun, the tomb cannot be discussed in isolation and is put into the wider context of conservation issues across the royal cemeteries of the West Bank and broader globally-relevant issues of sustainable tourism. END_OF_DOCUMENT_TOKEN_TO_BE_REPLACED

There are many important and disappearing sites of the Early Coptic period in Egypt that should at least be considered as world heritage sites. These include Wadi el Natrun in the desert edges of the eastern Delta, the site of an important early Christian monastic tradition, with four functioning monasteries surviving today (and recently put forward to UNESCO for consideration); Kellia, an important monastic site north east of wadi el-Natrun, which demonstrated the ‘bridge’ between the ascetic (lone) monks and the cenobitic (communal). Just as important is the vast Christian cemetery of el Bagawat near the Kharga oasis, with its painted private tomb-chapels, considered to be the oldest and largest Christian cemetery in the world. A few hour’s drive from Luxor it is now an increasingly busy tourist attraction and should certainly be considered for a place on the UNESCO list. END_OF_DOCUMENT_TOKEN_TO_BE_REPLACED