Introduction to the Contents of Tomb KV57 (Horemheb)

KV57, Horemheb’s royal tomb in the Valley of the Kings is famous for its bright decoration but it has yielded a large number of artefacts. The tomb has been excavated twice by Theodore Davis after he discovered the tomb in 1908 and a century later by Geoffrey Martin. This paper brings together findings of both excavations to show that the tomb originall contained an assemblage matching or surpassing that found in KV62, the tomb of Tutankhamun END_OF_DOCUMENT_TOKEN_TO_BE_REPLACED 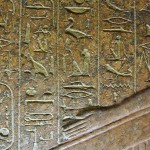 Lecture Review: The re-excavation of the tomb of Horemheb in the Valley of the Kings by Professor Geoffrey Martin

Professor Martin is currently engaged in assembling the results of his work re-excavating the tomb of Horemheb for publication, and it became clear from his lecture that this work is long overdue and will be welcomed by the academic community. Martin described re-excavation as a new type of archaeology, geared specifically to finding information that previous excavators may have missed. He cited Kemp’s work at Amarna as an example of this. END_OF_DOCUMENT_TOKEN_TO_BE_REPLACED