Browsing: Home / 2012 / February / 27 / Lecture Review: The re-excavation of the tomb of Horemheb in the Valley of the Kings by Professor Geoffrey Martin

Lecture Review: The re-excavation of the tomb of Horemheb in the Valley of the Kings by Professor Geoffrey Martin 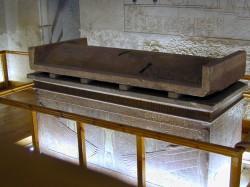 The sarcophagus, with raised lid, in the tomb of Horemheb (1857) by Jean-Pierre Dalbéra

Organized by the Friends of the Petrie Museum of Egyptian Archaeology, around 100 people attended the lecture, which was held in the G6 lecture room at the Institute of Archaeology (UCL) on 27th January 2012.  On behalf of the Friends, the lecture was introduced by Lucia Gahlin, who had studied under Professor Geoffrey Martin when the Department of Egyptology was separate from the Institute of Archaeology and Professor Martin was the Edwards Professor.

Professor Martin is currently engaged in assembling the results of his work re-excavating the tomb of Horemheb for publication, and it became clear from his lecture that this work is long overdue and will be welcomed by the academic community.  Martin described re-excavation as a new type of archaeology, geared specifically to finding information that previous excavators may have missed.  He cited Kemp’s work at Amarna as an example of this.

The tomb, known today as KV57, was originally excavated the early 1900s and Professor Martin emphasised throughout the lecture the importance of re-excavating tombs that were not examined to modern professional standards. He also made it clear that his excavations would enable him to draw comparisons between the tombs of Horemheb and Tutankhamun.

The tomb was first excavated by Theodore Davis 1n 1908.  Although Davis published a summary of the excavation in 1912, the publication was anything but complete.  Martin says that Davis’s description of the tomb was only two pages long and included some questionable statements.  Edward Ayrton, Davis’s junior, wrote a longer and more scholarly account but this was rejected by Davis and has now been lost.  The catalogue, compiled by another contributor, was incomplete, with only the finest objects selected for illustration.  In that author’s somewhat chilling words: “Besides these objects there were found remains of objects not worth describing.”

Martin made extensive use of Harry Burton’s photographs during the presentation to show the condition of the tomb before and during excavation, highlighting the considerable changes that excavations and the landscaping of the Valley of the Kings has made to the overall appearance and feel of the Valley.  Burton is better known for his stunning photographs of the tomb of Tutankhamun.  The re-excavation of the tomb by Martin and his team shows that Davis, in the days before sieving was commonly practised, missed some archaeologically valuable items.

Horemheb, Profesor Martin explained, was a military officer under Tutankhamun, was regent during his reign and after the reign of Tutankhamun’s successor Ay, became king himself.  Before becoming king Horemheb had started a tomb in Saqqara (see Kate Gingell’s Photo Album of the tomb), but abandoned this when he became king in favour of a tomb in the Valley of the Kings.  Martin discovered and excavated this Memphite tomb.

The Tomb of Horemheb

The tomb of Horemheb has been closed, except for a brief period, since 1994 when there was a disastrous flood.  It is one of the largest tombs in the Valley, with several chambers divided by ramps that lead down a steep incline towards the burial chamber, where the granite sarcophagus was found intact but the lid was broken. 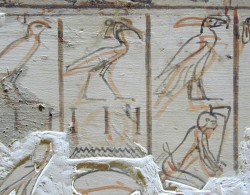 Although the construction was largely completed the decoration was not.  As a result, the various stages involved in the application of decoration of an Eighteenth Dynasty tomb could be analysed, making this an archaeologically very important tomb.  When Davis found the tomb it was in almost pristine condition but hasdeteriorated somewhat since the 1960s.  Martin showed some slides of the decoration of the tomb, with wonderfully bright colours on a dark blue-grey background.

Some of the items found by Davis resembled those found in the tomb of Tutankhamun, including a striding panther, human figures, the head of Tauret and a beautifully modelled Anubis figure, all denuded of their gold leaf and other decoration.

In spite of Davis’s 1912 publication and a number of other small articles there has been no definitive publication of the tomb and its contents.  Professor Martin is aiming to correct that omission, pointing out that the same can be said of the tomb of Tutankhamun, from which many objects remain to be published.

The analysis and re-excavation of the tomb

The first task of Professor Martin’s team was to review the existing material.  Harry Burton’s photographs provided an invaluable database of information.  Martin showed Burton’s photographs of the tomb at the time of its discovery, with the entrance completely filled with limestone chips, the original spoil from the tomb’s creation.

Further Burton photographs showed various parts of the tomb littered with debris, with pieces of collapsed ceiling throughout.  Some of the photographs were useful for locating the part of the tomb in which some of the objects were found and are the only record of the location of these objects at the time that it was excavated by Davis.  Even though the tomb was robbed, Burton’s photographs give an idea of where they would have been originally placed.  In the big room behind the sarcophagus room objects were shown lying in the debris, including a typical wooden Oisirs figure.  In a little room known as the “Osiris room” with a beautiful Osiris figure painted on the wall, Burton’s photographs again show objects lying in the debris.  Burton’s photographs have also helped to identify a number of objects now in museums.

The well shaft, measuring 4m by 4m at the top, was full to the brink with debris.  This was emptied by Davis but later refilled by spoil from other parts of the tomb.  Martin’s team was able to empty it (very hard work, Martin emphasised) and when the spoil was moved to the outside it was sieved so that any tiny remains could be recovered.  Debris is not unique to Horemheb’s tomb.  While working in the Valley of the Kings over four seasons, Martin was able to visit most of the tombs and observed similar debris in most of them.

Amongst the small items found in the room behind the sarcophagus room were fragments of the canopic chest that is housed in the Cairo Museum, and which Martin hopes will be reunited with each other.  More bewildering was the discovery of the lid of a Canopic jar from a private individual, with a hieratic inscription that is frustratingly impossible to read.    Martin showed a slide with numerous small trefoils made of glass.  They were found by the dozen by Martin’s team both on their own and inlaid into a fragment of wood.  As Martin said, those familiar with the tomb of Tutankhamun would recognize them instantly when shown a photograph (as he did) of the double-headed cow couch, which has dozens of these blue trefoils inlaid into it.  They also found pieces of sandstone grinder and a quern, again items found in the tomb of Tutankhamun.  Notched ends of arrows and seals showing bound prisoners were discovered, together with wine jar handles marked in hieratic with “the estate of Horemheb” (per Horemheb).  One of the seals showed the name of Horemheb’s wife.  Pottery was notably lacking in the re-excavation and it was not mentioned in Davis’s book, which also fails to record in which room objects were found

The well shaft, 4m square, was excavated to its base, 7m down.  At the bottom of the shaft were two chambers exactly 3m long and 1m high.  Debris had settled into them so firmly that it was like concrete.  Martin’s team found broken blocking stones from the doorway above.  No objects were found in either of the chambers and their purpose is unknown.  In the shaft itself, however, there were a lot of objects.  There was shawabti equipment (although no shawabit were found either here or in museum collections), lotus-form cup fragments, a large number of hieratic-inscribed sherds of wine jars of a well-known type typical for the period. The jar labels referred to years 13 and 14 of the king’s reign, some mention vintners and vineyard locations and the wine is referred to as nefer nefer (very good quality).  At least 92 large wine jars are represented in the funerary equipment.

Although they were not discovered by Martin, the Professor speculated about the role of the strangely contorted wooden figures that are so well known from the tomb.  In descending corridors in Ramesside tombs enormous embrasures or shelves were painted with protective figures.  Martin suggested, emphasising that this was pure speculation, that these wooden figures were the precursors of the Ramesside paintings and served a protective purpose and noted that some wooden figures in the British Museum are now believed to have come from KV57 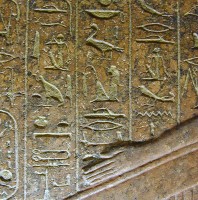 In the sarcophagus room, Martin says that the hieroglyphs on the sarcophagus are in excellent condition but had not been completely recorded.  He was able to do this. The lid of the sarcophagus, broken in two, and repaired at some point in the past, had been replaced the wrong way round so Martin and his team set about raising it to position it in the correctly.  Martin says that a peculiarity shared by both the tomb of Horemheb and that of Tutankhamun is that the lids were not original one to the sarcophagi and were not of a piece with the boxes.  With the lid raised, the contents of the sarcophagus were revealed.  The base was covered in bones, representing at least three people, and including one skull fragment.

A final discovery was some perplexing graffiti, etched in lamp black, apparently indicating that two visitors prior to Davis had been inside the tomb, one dated 21.5.1887, the other 1896.  An incomplete surname “Bon___ce” is associated with the latter graffito. This remains a mystery.

One hindrance is the modern wooden flooring.  Martin reports that a Burton photograph shows a shallow platform for the canopic chest but this lies beneath the modern floor and has never been properly studied.  A small amount of unsorted debris may also therefore lie beneath this floor, although Martin did not address this.

Perhaps the most important finding to emerge from Professor Martin’s work is the reduction of the duration of Horemheb’s reign from twenty seven years to around fourteen years.

Another important conclusion was that although there were obviously considerable similarities between the contents of the tombs of Horemheb and Tutankhamun, the significant difference was in the arrangement of those objects.  Professor Martin described the tiny tomb of Tutankhamun as a “cache,” with all the objects piled in randomly.  The tomb of Horemheb, however, is a real royal tomb, carefully designed, and demonstrates that had the tomb of Tutankhamun been completed the objects would have been carefully placed in designated areas.  He gave the example of the “chariot hall,” but emphasised that all objects would have had a special place consistent with Ancient Egyptian beliefs about the afterlife.

Professor Martin concluded his talk with a tribute to the Egyptian workmen on his team who are so often un-named in excavation publications.  His lecture was informative and humorous and very well received by the audience who gave him a long applause. Martin’s announcement that he will be publishing a complete analysis of the tomb of Horemheb is excellent news and should be very well received.  Martin lamented that not one of the major royal tombs in the Valley has been comprehensively published; KV57 may become the first.