Browsing: Home / 2012 / February / 27 / The Egyptian Collection of the Archaeological Museum of Zagreb and its Mummies

(Editor’s note: Apologies for the light reflections on glass cabinets in some of the photographs).

The Egyptian collection in the Archaeological museum in Zagreb currently has over 2,300 artifacts of Ancient Egypt, and is the largest and most complete collection of its kind in Croatia. The first acquisition, the Zagreb mummy, is still its most famous artifact today.  It came to the museum in 1862, and remains the core of the collection.   Another part of the collection was bought from a famous Roman junkman in Naples called Lancia (Tomorad 2003). Studies revealed that most items came from Luxor and the surrounding areas.  After the collection was initially purchased, it was later expanded by the donation of  gifts and other purchases. .

Like most world collections it consists primarily of burial objects and offerings  including shawabtis, bronze figurines of Gods, stelae, and scarabs, as well as having  numerous other everyday items including comb, soles of shoes, jewellery, but without doubt  the most valuable pieces in the collection are the mummies.   These were all recently scanned with the latest equipment and this scanning began in 2008 using a 16-layer CT with a magnetic resonance imaging technique that has only been used once until now).   The latest scans of Tutankhamun were done with 6 layers.  Currently there are five of them in the museum collection, four of which are currently on display. 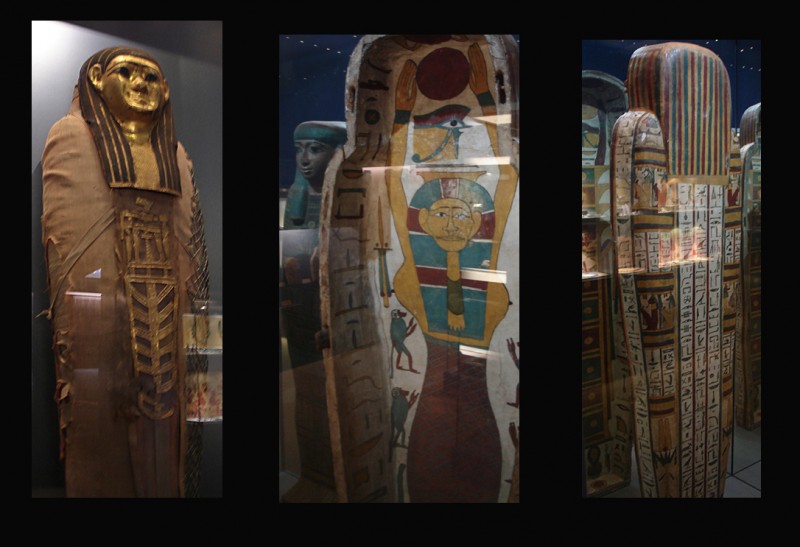 The first mummy in the collection is that of a lady named Shepenun, and dates from the Ptolemaic period. The sarcophagus has two wooden layers decorated with beautiful paintings of Osiris, the sons of Horus, Lotus flowers, and Ra in a boat.   Shepenun was mummified in the usual fashion of bandages soaked in resin. Her scans showed a lot of thick spots around her body, and these proved to be amulets and scarabs placed there to protect her in the afterlife.    The technique used for her mummification was perfectly carried out and in accordance with the contemporary standards. She is still wearing the original cartonnage gilded mask . The only apparent reconstruction to have been carried out was on the blue, glass cylindrical net which would probably have been wrapped around her entire body (Meridijani 2011).

The second sarcophagus is that of Kareset, daughter of Padi-Ptah.  The mummy it contained was originally believed to be that of Kareset, also thought to be from the Ptolemaic period, but a recent scan showed that the mummy was that of a male.  This has raised the following questions.  Who is he, how did he get there, and where is the original owner of the sarcophagus? For now these questions remain unanswered. The depictions on the sarcophagus cover the entire lid and bottom, and these mainly consist of a listing of sacrifices to Kareset’s soul.

Of the five mummies in the collection, the mummification carried out on this one was the best, and  it was a technique that was rare until around the 21st Dynasty.  The organs were also mummified, wrapped in linen bandages and put back inside the body, as was the practice from the 21st Dynasty onwards.  The C14 method that was carried out in Florida showed he lived from around 840 – 810 BC, and it is believed that he died in his 30s of a disease (Meridijani 2011).

In 1970 the Egyptian Government gifted a sarcophagus together with its mummy Kaipamau to Yugoslavia as a token of its appreciation to Yugoslavia for the help given in moving the Abu Simbel temple after the completion of the Aswan dam.  The mummy went to the museum in Zagreb where it has been exhibited from the 24th April 1974 until today.

The mummy of Kaipamau is the newest mummy to be added to the collection, but the oldest in terms of age, as this mummy is from the 22nd Dynasty.   She was found in the tomb of Khereuf (TT 192), in  El-Assasif on the West Bank of Luxor.  The families of the Priests of Amun were buried in this tomb.   Analysis showed that Kaipamau was a priestess and bore the title “Singer of Amun”..  Another mummy found in the tomb with her can be seen in the museum in Luxor.   Kaipamau’s double layer sarcophagus is extremely well illustrated, and includes the ba bird, that is symbolic of the soul, and a solar deity with a uraeus on its head and an ankh in its claws. Scans showed that the quality of her mummification was not very good.  As her organs were left inside her, it is reasonable to assume that she had a cheaper mummification (Meridijani 2011, p.64-65).

Mummy No 4 – The Fifth Mummy

The only mummy not on display is simply referred to as the Fifth mummy. This mummy was  gifted by  Juraj Haulik, the Bishop of Zagreb in the 19th century (1788 – 1869). Unfortunately this was a time when Egyptmania was at its peak and many fake artifacts were going around.  It would seem that this sarcophagus was one of them.

The C14 method showed that the mummy was original  and dated back to the 4th century BC (also Ptolemaic).   The mummy is wrapped in cartonnage and decorated with flowers that are neither Pharaonic nor Ancient Egyptian  in style and the body was mummified in the usual way. The scan showed that the mummy was in fact a female who appeared to have lived into her forties.  Sadly, she was not only badly damaged after burial,  she was also pierced with a metal bar strengthened from the outside with metal loops.   We can assume that this may have been  done to ensure that the mummy did not fall apart, and  we are unsure as to who did this.   Scans showed she has a peculiar object inside her head, and by using a combination of endoscopy and CT (a procedure done for the first time in the world on a mummy), it was determined that it was a twig of bamboo. This discovery complemented Herodotus’ description of the mummification process.  He believed that  could only be crushed by using metal instruments with a hook on top (Meridijani 2011).

Mummy No 5 – The Zagreb Mummy

The final mummy in the Museum’s collection is the most famous of all.  She is simply called the Zagreb mummy and dates from around 390 BC. The mummy was bought by Mihajlo Barić  sometime during his stay in Egypt.   After his death in 1859 it was left to his brother who later gifted it to the Museum.  The mummy was received at the Museum on 5 August 1862 by Mijat Sabljar, the Curator for the Archaeological Collection,  where it has been permanently exhibited since 1967 (Tomorad 2003).  As the general public could not resist touching the mummy this caused it some considerable damage, and in order to preserve it the mummy was moved to the Etruscan Room where it has been placed in a sealed case and kept at an even temperature of 22° C. In 1998 Nazzareno Gabrielli from the Institute for Scientific Research of the Vatican Museums had to carry out some considerable restoration work in order to save it (Archaeological Museum of Zabreb 2012).  Bandages also discovered with the mummy hold the longest Etruscan text found in the world and the only antiquity linen book preserved called Liber linteus Zagrabiensis, and these are displayed in a separate showcase.  .

Questions have been raised as to who she was, where she came from, and how the bandages came to be buried with her.  As an Etruscan colony existed in ancient Egypt, it is possible that she was an Etruscan and buried according to Egyptian custom.   Her death could have been sudden and the price of cloth high, leaving the mummifiers with no option but to use any cloth that came to hand. 10

Other items were found with the mummy and these included the remains of other bandages, although these had no writing on them, a very badly damaged Book of the Dead, nuggets of balm, part of her funeral wreath, blue beads, her jewellery, a mummified cat’s head, and a funeral papyrus (Tomorad 2003). It is from that papyrus that it has been concluded that she was Nesi-hensu, wife of Paher-hensu the “godly tailor” from Thebes who made sacred robes for the cult of Amun.

The mummy was first scanned in 1986 in the Department of Radiology KBC of the Medical college of Zagreb. Bone characteristics determined that she was a female who died somewhere in her 30s or 40s of natural causes.  A small mass of resin which was used during mummification was also found in her head (Tomorad 2003).

In 1911 Herbig discovered a small mammal head in the wreath, and upon examination it was discovered to be the head of a cat. Scans carried out in 1986 proved it to be a juvenile specimen.     Other small animal mummies were also discovered and scans of their bodies revealed that they were different from originally thought. The ibis mummy turned out to be the bones of other smaller birds and the lizard was in fact a small bird.  The crocodile mummy, however, really was a crocodile

From this I think we can safely assume that deception was as popular in Ancient Egypt as it is worldwide today.