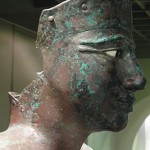 The story of Labib Habachi was predictable (Figure 1). For centuries Egyptians suffered from the prejudicial views of foreigners arriving in their country. Some came in search of treasure, others in pursuit of knowledge and many simply to pass time because they had the wealth to do so. Half-hearted efforts were made by a few to train Egyptians as excavators, such as when a University was opened in 1869 in Bulaq. Lacking support and adequate funding it proved unsuccessful, closing its doors in less than five years. END_OF_DOCUMENT_TOKEN_TO_BE_REPLACED