A beginner’s guide to dating the Predynastic – Part 2 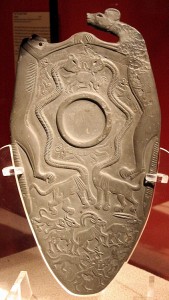 The topic of relative dating was dealt with in Part 1, a previous post. A relative sequence was available for the period between the Badarian and the period when unification was thought to have taken place. However, although this sequence has formed the framework for all other sequences, no calendar dates were available. The only date which was relevant was the proposed date of 3000 BC for the unification of Egypt. Apart from the fact that the Predynastic predated it, we would not be any the wiser about exact ages of these periods if it was not for radiocarbon dating.

I am going to focus on radiocarbon dating because it is the one used most frequently, and the one which seems to generate the most misunderstandings, but I will mention other relevant techniques at the end.

So what actually is radiocarbon dating? Radiocarbon dating (also written, more colloquially, as Carbon 14, 14C or C14) was invented by Willard Libby in 1949. Carbon 14 is an unstable isotope which exists in the atmosphere with other isotopes and is absorbed by all living things (plant and animal). Because it is unstable it begins to decay at the time of the death of the organism that absorbed it at the rate of half the quantity at the time of death every 5730 years.  This is the half life of C-14. The rate of decay is regular and Libby was able to measure this rate using a Geiger counter. Libby calculated how long it took for half of any carbon 14 in a sample to decay (its so-called “half life”). He also estimated that atmospheric levels of carbon 14 would remain the same throughout time. He realized that if this was the case the rate of decay of carbon 14 could be used on samples from ancient contexts to date those contexts. The organic materials on which it can be used include wood, charcoal, bone (but not cremated bone), plant remains, skin, etc. However, a sample must be at least 10g for wood and charcoal to be dated and at least 100g for bone. Of course one of the problems experienced by archaeologists is that it is not always possible to obtain a sample of this size. Radiocarbon dates can be used on samples which are between 200 and 10,000 years old. Reliability decreases after 10,000 years ago and becomes unusable for practical purposes after 40,000 years ago.

When Libby first released the details of his technique he caused a sensation, because for the first time archaeologists were able to obtain real calendar dates for artefacts and sites, rather than trying to fit them into often clumsy relative frameworks. In Europe many of these frameworks were found to be too old or too young, and the face of European archaeology was changed forever.

Radiocarbon dates are always allocated a unique laboratory reference which shows an abbreviated form of the laboratory’s name and the number assigned to the sample. Some academic publications are kind enough to add the lab reference which makes it easy to double check them or find out more information about the sample used. Many, however, do not. A typical lab code would be GrN-54432, where the GrN refers to the laboratory name Groningen.

Unfortunately life is never simple, and the radiocarbon dates being produced using Libby’s system on samples of known dates obtained on wood,  the dates of which were known from tree-ring dating (dendrochronology) were found to be too young. The effect was increased over time, so that some prehistoric dates were between 800 and 900 years too recent. The cause of the problem was that Libby had not realized that the concentration of C14 in the atmosphere has not remained constant throughout time – it has fluctuated. The answer to the problem lay in an unlikely place – the Bristlecone Pine. This specie of tree has been used to build up tree ring sequences, which provide accurate dendro-chronological dates back for a 5000 year period. By dating samples with a known date, scientists were able to determine when and to what degree the carbon 14 fluctuations occurred and then use that data to work out a correction curve whereby radiocarbon dates could be calibrated by reference to the dendro dates.  These calibration curves look simple when you see them on paper but in practice they are far from straight forward, due to the inbuilt probability distribution of radiocarbon dates mentioned above. To produce a correctly calibrated date range requires the use of a highly specialized and complex statistical technique called Bayesian statistics (named after the man who developed it). The calculations required are so complex that they must be carried out by a computer programme. A number of programmes now exist, with some of them freely available online (e.g. OxCal). The uncalibrated radiocarbon date together with its probability range, are fed into the programme which then makes a calculation to produce a date which is expressed without a deviation. Instead, the calibrated dates are expressed as a possible range between two dates e.g. 4900-3400 BC.

Radiocarbon dates can be expressed BP or BC/BCE. BP is Before the Present, the present having been set for practical purposes at 1950. BC (Before Christ) and BCE (Before Calendar Era (the politically correct version of BC) both refer to the time before the modern calendar begins – the year 0. Hence 100BC is approximately 2108 years ago, whereas 100BP would only be AD 1850. In fact, historians wouldn’t use BP because their dates are much more fine-grained, but it was just easy to use it to illustrate the point!

Of course this all leads to the complication of having uncalibrated dates and calibrated dates. Either can be used in publications, and sometimes both are shown. This has lead to considerable confusion. Fekri Hassan expresses it very well in his book Droughts Food and Culture: “One of the key methodological issues hampering interdisciplinary communication and correlation of environmental and cultural data is the lack of standardization in reporting radiocarbon dating” (2002 p.8).

In my undergraduate days the uncalibrated dates were expressed in lower case as bp and bc, whereas the calibrated dates were expressed BC and BP. This is somewhat error prone, so nowadays a more popular method is to express uncalibrated dates BC or BP and calibrated ones Cal BC or Cal BP. If you’re lucky your author will explain which conventions he or she is using at the beginning of the publication, but most don’t. I think that for those new to prehistory this is the main source of confusion – between bp, bc, BP, BC, Cal BP and Cal BC there is a lot of space for serious confusion – and it creeps into one or two publications in the form of typographical and editing errors. In his above-mentioned book Hassan is good enough to provide a list of standard abbreviations used in the text and a conversion table of radiocarbon age estimates, which are immensely useful. He also indicates which calibration programme that he used, which in this case was Stuiver and Reimer‘s Calib 3.0.3c programme. But Professor Hassan is one of the exceptions, not the rule.

Radiocarbon dates are only as good as the people handling and interpreting them. There are a number of points in the life of a sample where its value can diminish – for example, in errors made in the laboratory analysis, and contamination from other samples. Background cosmic radiation can also impact the value of a sample. For this reason it is never wise to depend upon one radiocarbon date. In order for a site to be dated securely a range of dates should, in an ideal world, be taken. These give additional statistical validity to a date range, and any anomalies will show up quite clearly – the Nabta Playa dates are a good example of this. In the Nabta reports there are so many dates taken at sites in the area that the anomalies tend to show up quite clearly.

There can also be problems with the way in which samples are selected.  The sample dates the time when the organic material stops absorbing carbon 14, not the time of its manufactures.  So if a plank of a boat is being dated, the radiocarbon date provides the date when the tree was felled rather than the date when the boat was built.

There are other types of absolute / scientific dating technique available. These are usually used when radiocarbon dates are impractical – either because there are no organic remains present or because the date range of the site falls outside that for which radiocarbon is useful. I don’t want to completely overload anyone who has been good enough to read this far, but I thought that a couple of examples might be of use/interest.

Thermoluminescence dating (usually just abbreviated to TL) is used for dating fired clays – like pottery. It can be used to date items and baked clay layers from the present until 400,000 years ago but it is relatively unreliable when compared with radiocarbon dating so it is only used in circumstances when radiocarbon dating is unavailable.  In other words, when there are no organic remains or when the site is over 40,000 years old. Clay contains quartz crystals which experience radioactive decay which builds up to create an electrical charge. This charge builds up at a known rate. When an item made of clay is exposed to heat under laboratory conditions the light is released and this can be measured to calculate the length of time since it was fired (the time at which the light was first released).

Uranium Series is potentially useful for obtaining dates from calcium-rich samples like teeth, shells and calcium carbonate deposits (stalagmites or stalactites or stalagmitic floors, generically and colloquially termed “stal”). Again it operates by knowing the decay rate of isotopes – in this case U235 and U238, which are water soluble and produce thorium and protactinium. It needs a high content of uranium in the sample to be of any use.

The development of improved forms of scientific dating techniques is always a possibility and some of these may help to date that most elusive of datasets, painted rock art.

A great deal of work has gone into building a chronology for Predynastic Egypt, much of it built on Petrie’s original scheme, and details continue to be refined. Many of the problems for people reading texts that use radiocarbon dates lie in the fact that many authors fail to explain the conventions being used.  That will hopefully change with time.

In Part 1 I described relative dating techniques and in Part 2 I have tried to explain the immense value of radiocarbon dating to establish chronologies of Predynastic Egypt.

The relative schemes are often difficult to get to grips with, but the hope is that eventually sufficient C-14 dates will be obtained to enable archaeologists to tie the relative dates into a radiocarbon sequence that will provide much greater accuracy and granularity.

Midant-Reynes, B. (translated by Shaw, I) 1992, 2000, The Prehistory of Egypt:  From the First Egyptians to the First Pharaohs. Blackwell Publishers.