What was on this platform at Medinet Habu? 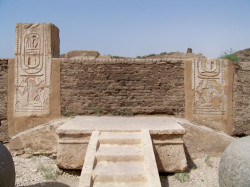 James Whitfield would like to know if  the platform in the photo was the site where a statue might have been located, or even perhaps the location of a throne of Ramses III.  It is  adjacent to the place that John Romer described as the royal bath.  You can click the image to see the full sized picture.

If you can help out with an answer, please post replies below.

UPDATE: We are having a technical hitch with this post (just this one) connected with the photograph, which is preventing replies from being shown.  We are working to fix it but in the mean time here are the comments that have been made in response so far (do keep them coming as replies and I’ll add them manually):

With the 3 sets of steps, I’d like to think it was the throne, rather than a statue. It’s beautiful. Never saw it before. Thanks a bunch for the picture.

A kiosk/chapel, such as are on display in the open air museum at Karnak.

At the end of last year, I was lucky enough to take a tour with Kent Weeks which included Medinet Habu. He pointed out this platform as being part of the Throne Room, but he said that he felt that it had been reconstructed incorrectly.