By John Wyatt with illustrations by Jackie Garner. Published on Egyptological, In Brief, on 30th June 2011.

This series of notes on the birds of Ancient Egypt consists of edited extracts by John Wyatt from his own forthcoming book Birds in Ancient Egypt: An Identification Guide, which is scheduled for publication in August 2012.  The co-author and illustrator for this book is Jackie Garner, FRSA.  For further information or to comment on any of his ideas you can leave a comment below or John can be contacted at waxtours {at} tiscali.co.uk

This iconic painting from the Old Kingdom Mastaba of Nefermaat and Itet is in The Egyptian Museum in Cairo and consists of three pairs of birds on one register. The right-hand central pair are universally accepted as the Red-breasted Geese, Branta ruficollis, and the left-hand central pair as Greater White-fronted Geese, Anser albifrons. The latter species was obviously well known in Ancient Egypt and was used as a hieroglyph, depicted frequently in art and often given as an offering to the deceased.  The former was rarely depicted and the only other known possible example is of a headless bird along the top edge of the Painted Wall from Tomb No. 100 at Hierakonpolis.

The outside pair of “grey” geese have previously been identified as the (Taiga) Bean Goose, Anser (fabilis) fabilis, on the basis of the orange-coloured legs/feet and the black nail (tip) to the bill. 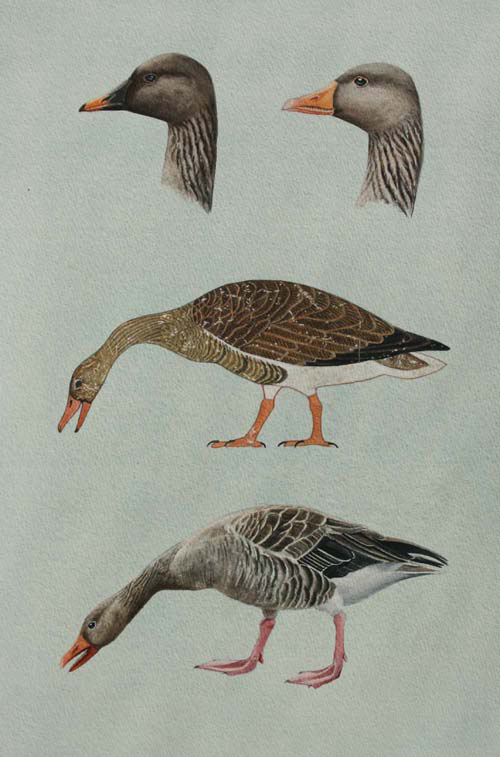 However two other important identification features for this species are not shown, the dark head and neck and the large amount of black at the base of the bill. Without these two features, the depiction, but for the orange legs/feet, could be of the Greylag Goose, Anser anser. We researched this further and discovered that the Egyptian Vulture hieroglyph, Neophron percnopterus, from the same tomb and right beside “The Geese of Meidum” in the Egyptian Museum, also has orange rather than pink legs/feet indicating that pink may not have been on the artist’s palette for that particular mastaba and that the nearest alternative had had to be used instead. Later it became clear that pink was not generally used until the Middle Kingdom anyway. The two outside birds are therefore now considered to be Greylag Geese, Anser anser.  It is also suggested that the Greylag Goose was more common and therefore much more frequently depicted in Ancient Egypt than previously thought.  Separating Bean and Greylag Geese on reliefs without any remaining colour is extremely difficult.

See the second in the series, The Rekhyt, which looks at the identification of the bird behind the iconic rekhyt bird, which appears on tombs, temples and in hieroglyphic texts.

John Wyatt is a specialist in African birds and mammals having worked for 12 years in Northern Rhodesia/Zambia in Her Majesty’s Overseas Civil Service. From 1982-94 and from 1988-89 John was Deputy Director of Development at the British Trust for Ornithology. For the last six years he has combined his University training as an Anthropologist/Ethnographer with his skills as an Ornithologist and is at present the world’s only full-time Ornitho-Egyptologist.