By John Wyatt with  illustrations by Jackie Garner. Published on Egyptological, In Brief, on July 1st 2011. 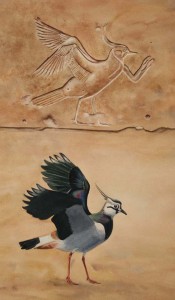 Rekhyt from the Red Temple of Hatshepsut at Karnak

This series of notes on the birds of Ancient Egypt consists of edited extracts by John Wyatt from his own forthcoming book Birds in Ancient Egypt: An Identification Guide, which is scheduled for publication in August 2012.  The co-author and illustrator for this book is Jackie Garner, FRSA.  For further

The hieroglyphs of the rekhyt, Gardiner sign G23/G24,  have previously only been identified as the “black”-backed Northern Lapwing Vanellus vanellus.  However, apart from its colours, the Northern Lapwing has two other key identification features, a crest and a solid black breast.  Many of the representations of the rekhyt hieroglyphs show both these features, as in the lines of rekhyts along the bases of the Red Temple of Queen Hatshepsut at Karnak.  But most of the depictions of a crested lapwing in art, such as those in swamp scenes from the Mastaba of Itet in Medium and the Theban Tomb of Amenemhet (No.81), clearly lack the black breast marking. 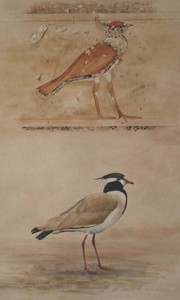 This lack of a black breast, however, is a key identification feature of the only other North African crested lapwing, the brown backed  Black-headed Plover, Vanellus tectus, which to date seems to have been over-looked but which is still to be found in the sub-Saharan Sahel Region from the Atlantic Coast right through Sudan and Ethiopia to the Red Sea.

The evidence that this species also existed in ancient Egypt can be found in the top hieroglyphic resister of the south wall of the 11the Dynasty tomb of Baqet III at Beni Hasan where a painted hieroglyph, in excellent condition, clearly shows a Black-headed plover.  It therefore appears as if both the Northern Lapwing, Vanellus vanellus, and the Black-headed Plover, Vanellus tectus, were present in Egypt in Pharaonic times and that both were used to depict the rekhyt.  Other bird hieroglyphs have been found to be represented by two or more actual scenes.

John Wyatt is a specialist in African birds and mammals having worked for 12 years in Northern Rhodesia/Zambia in Her Majesty’s Overseas Civil Service. From 1982-94 and from 1988-89 John was Deputy Director of Development at the British Trust for Ornithology. For the last six years he has combined his University training as an Anthropologist/Ethnographer with his skills as an Ornithologist and is at present the World’s only full-time Ornitho-Egyptologist.