Published on Egyptological, In Brief, on 7th December 2011.

In her article on Hatshepsut in the December 2011 edition of the Magazine, Barbara O’Neill mentions the deity Pakhet.  The following introduces what little is known about this elusive deity.

Pakhet was represented in the form of a woman with a lion’s head (figure 1- click to see the bigger image). She looks very like leonine representations of Sekhmet and Bastet and was often associated with them.  In the Ptolemaic period she was identified with the huntress Artemis. Her name pxt or pxT, is usually interpreted as “the one who tears apart,” but may also be translated as “the one who scratches,” names that described her most important characteristic as a ferocious huntress.  Her other popular name is “goddess at the entrance of the wadi.”

Pakhet is first known from the Coffin Texts of the Middle Kingdom.  She is mentioned prominently in Coffin Text Spell 470 where she is described as “Pakhet the Great, whose eyes are keen (?) and whose claws are sharp, the lioness who sees and catches by night” (translated by Faulkner 1973).

She is best known, however, from the New Kingdom rock cut temple known as the Speos Artemidos (Cave of Artemis), at Beni Hasan in Middle Egypt (figure 2).  The temple was built by Hatshepsut and its decoration was elaborated by Seti I.  The original name of Speos Artemidos is preserved in hieroglyphs, but its translation has remained uncertain. Fairman and Grdseloff suggested that it should be read srt (1947).  Although the temple may have been built over Middle Kingdom or Second Intermediate remains there is no evidence elsewhere in the Beni Hasan area that Pakhet was worshipped before the New Kingdom.  There is a nearby cemetery for mummified cats but most date to the Late Period. 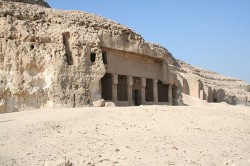 Speos Artemidos consists of a transverse hall (pronaos) with eight columns (of which only three remain) and a smaller sanctuary behind the hall.  A number of scenes show Pakhet.  The most notable is probably the scene showing Hatshepsut in the khepresh crown kneeling before Amun on his throne, both facing Pakhet.  Pakhet and Amun both reach out towards the head of the Pharaoh Hatshepsut with their left hands.  Pakhet wears a red solar disk with a cobra rearing at the front, and holds an ankh in her right hand.  The scene is most clearly represented in a detailed illustration by Chappaz-Pache (1993). Another scene shows Seti I making offerings to Pakhet on her throne.

A number of inscriptions are somewhat difficult to interpret but others give an idea of how Pakhet was regarded.  She is described, for example, as “Pakhet the great, Mistress of Srt, in her temple of the inaccessible valley , which she hewed out herself,”  indicating her role as a deity of the hostile Eastern Desert and her power over the environment.  In one of the scenes, to the right of the door to the sanctuary, she is shown giving Hatshepsut two uraeus sceptres, with a sun disk, horns, two feathers, extending two sceptres to Hatshepsut.  Above her head the hieroglyphs quote her: “I give the two uraei upon they brow, they appear between thine eyebrows.  The mnit is with thee, protecting thee, thou having appeared upon the throne of Horus”.  In the lintel over the entrance to the sanctuary Pakhet offers Hatshepsut “all the valour and all the might of Ra, every day, like Ra,” but also offers “all health and all joy, like Ra, forever.”   (All translations in this paragraph by Fairman and Grdseloff 1947).

Pakhet was clearly very like Sekhmet in many ways, being both dangerous and protective.  She was a night huntress, ferocious in the presence of enemies but, at the same time, she was associated with the lion-headed Barque of Pakhet, escorting Ra’s Solar Barque in a protective role.

Like other leonine deities Pakhet could also be represented as a cobra.  Most deities had partners and in this case, Pakhet was apparently partnered with a form of Horus.

Although there is almost no evidence of how Pakhet was regarded by the general populace, Geraldine Pinch suggests that the “claw amulets worn by Egyptian queens and princesses may evoke the protective might of this goddess” (2000, p.134).

Figure 1. My sincere thanks to Su Bayfield for permission to use her photograph of Pakhet (copyright Su Bayfield, all rights reserved). Su’s  excellent Egyptian Monuments website (http://egyptsites.wordpress.com/) continues to be an invaluable resource for information about Egyptian sites.

Figure 2. The photograph of Speos Artemidos was taken by Einsamer Schütze, 2006, and made available under Creative Commons licensing (Attribution-Share Alike 3.0 Unported, 2.5 Generic, 2.0 Generic and 1.0 Generic license).

My thanks to Kat Newkirk for commenting on the content, offering suggestions and sending me additional material.

Hornung, E. 1971, translated by John Baines in 1982
Conception of God in Ancient Egypt: The One and the Many
Cornell University Press

Wilkinson, R.H. 2003
The Complete Gods and Goddesses of Ancient Egypt
Thames and Hudson