Review by Andrea Byrnes.  Published in In Brief, on Egyptological, 3rd April 2012 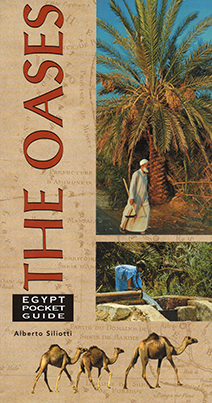 The Oases is one in an excellent range of pocket guides to various parts and periods of Egypt.  They are all characterized by beautiful photographs, excellent maps, site plans and illustrations and informative text that guides the traveler through the temporal, geographical and cultural space under discussion.

Consisting of 48 pages and two fold-out covers the topics covered in the Table of Contents are:

The book opens, quite literally, with a colorful fold-out map of the Egyptian Western Desert fro the Nile in the east to the Libyan border in the west, and from the Mediterranean coast in the north to the southern edge of Kharga oasis in the south.  Set against a background that shows the Western Desert’s topography, roads and tracks are shown, together with symbols indicating places of interest: archaeological sites, fortresses, monasteries, museums, caves, springs and, usefully, check points and fuel stations. 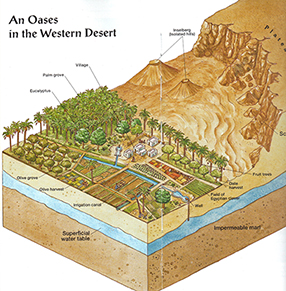 The book then introduces the the oases, answering the question “What Is An Oasis?”  All the oases are located in depressions and a quick burst of geomorphology and climatology explains how the oasis depressions are thought to have been formed, supported by helpful diagrams.

The next two pages show an idealized artist’s impression in the form of an isometric view of an oasis from the sub-surface marl, through the aquifer, up to a typical farming village and to the desert topography beyond.  It’s a super illustration and a great way of helping readers to visualize a modern oasis farming village, with its fields, groves, irrigation canals and its desert surroundings.

Two pages discuss the historical context of the oases, covering the Lower Palaeolithic to the 6th Century AD, with some lovely photographs.  A marvelous illustration shows an artist’s impression of how the city of Hibis in modern Egypt would have looked in the  Graeco-Roman period – a sprawling mass of buildings surrounding the vast temple complex, with a lake beyond.

Siliotti then takes each oasis in turn.  The oases are such distinct and unique personalities that they defy a strictly formulaic approach.  Bahariya is the northernmost oasis of the four New Valley oases.  Siliotti describes its main geological features and provides a short summary of its modern, Pharaonic and Graeco-Roman features.  A map of the oasis is marked with key sites and there is a street map of the main town, Bawiti.  Photos show scenes and views around the oasis, and a text box highlights the Ethnographic Museum.  This is followed by a good one-page account, with illustrations and photographs, of the dinosaurs of Bahariya, before the key archaeological sites are described.  These are the Temple of Alexander, the Valley of the Golden Mummies, the Chapels of Ain al-Muftillah and the tombs of Qarat Qasr Salim (that latter accompanied by plans).  All are accompanied by good photographs, those of the 26th Dynasty tombs of Qarat Qasr Salim being particularly fine, showing the beautiful colours and slightly naive style of the scenes, one of which shows a rare depiction of the desert god Ha.

Siliotti links his chapter on Bahariya with that of Farafra with a page that picks out the best natural and archaeological features to be seen along the road en route between the two oases.  Farafra, once at the junction of major caravan routes, has only recently  supported serious numbers of inhabitants due to the inaccessibility of water from the aquifer.  Siliotti looks briefly at the art gallery of  a local artist, before moving on to describe the natural environment.  The main heritage site is the old district of the main town, but it is good that the rich and important prehistoric remains are given a mention too.

The remarkable White Desert sits between Farafra and Dakhleh and is described by Siliotti as “the most important tourist attraction in the Western Desert”.  The photographs show why.  The White Desert is full of bright white fossiliferous chalk formations that either create vast floors on the desert surface or rise out of the sand,  framed against sapphire blue skies.  Siliotti helpfully describes how they were formed, giving a great insight into the sea-covered past of the area. 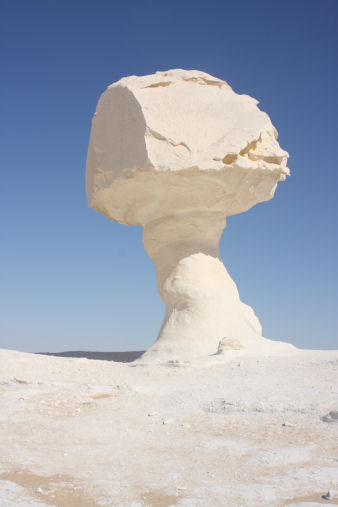 Formations in the White Desert. Photograph by Andrea Byrnes

The Dakhleh pages include a map, photos and plans.  Key features include the Ethnographic Museum, the Medieval town of Mut, the Roman settlement, a hot spring and the artificial lake.  The ancient Islamic houses of Al-Qasr village, the Roman temple of Deir el-Hagar and the traditional painted mudbrick village of Bashendi are all given a paragraph or two.  The spotlight falls on sites at opposite ends of the temporal scale, dating to the Old Kingdom and Graeco-Roman periods. There was an important town in Dakhleh during the Old Kingdom, Ain Asil, with a nearby necropolis of mastaba tombs.   The Graeco-Roman necropolis of Muzawwaqa was a very different proposition, consisting of rock-cut tombs, some painted.  In both cases the photographs are beautiful, illustrating the magnificence of the sites.

Kharga is the southernmost oasis, a major administrative centre with a big modern archaeological museum.  Most this chapter focuses on the fascinating 5th Century necropolis of Bagawat and the 26th Dynasty/Graeco-Roman temple of Hibis.   Other sites are described more briefly, with accompanying photos, including Qasr al-Ghweita (Persian), Qasr al-Zayyaan (Graeco-Roman), Paris (modern architectural experiment by Hassan Fathy), the temples and Roman fortreses of Dush (with photos and site map), and Ain al-Manawir (Persian underground aqueducts).

Having completed the tour of the New Valley oases, Siliotti shifts his attention to the oasis of Siwa, which lies to the north west of the Western Desert.  The oasis and its Berber population were only annexed by Egypt in 1820, and until recent years it has been very isolated.  Siwa is a verdant oasis, as illustrated by Siliotti’s photographs, full of palm trees, thermal springs and a vast salt lake.   Siliotti describes the main town of Shali, with a map, offering possible explanations for its peculiarly melted appearence.  Again, there are descriptions of the key archaeological sites including Gebel al-Manta necropolis (Graeco-Roman), Cleopatra’s Bath (a spring that could have no possible connections to Cleopatra), Ayhurmi (Temple of Amun which is famous for Alexander the Great’s visit to its Oracle) and the Temple of Umm Ubayd (dating to Nectanebo II).

The Fayoum, only 120km south east of Cairo by good main roads, is a busy modern agricultural region focused on a huge lake fed from the Nile, with an important archaeological heritage.  Siliotti covers it very briefly.

The book finishes up with a short bibliography (12 references), photograph and drawing credits, and a fold-out satellite photograph of the Western Desert with the Faiyum and the oases of Bahariya, Farafra, Dakhla and Kharga marked on it. 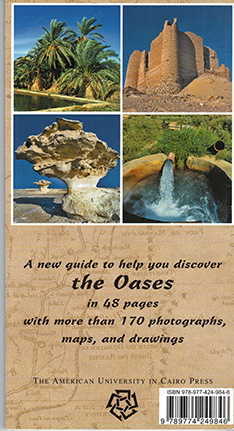 The back cover of The Oases

From a practical point of view, measuring 12cm by 21.5cm and only a few millimetres thick, this 48 page book can be pushed into a decent sized pocke.  Lightweight, it will not challenge the precious boundaries of your luggage allowance.

As an introductory guide to the oases it is of considerable help, drawing attention not only to the archaeology of the oases, but to other topics that will interest the visitor as they visit each oasis in turn.

As far as focus on areas is concerned, Bahariya is given the lion’s-share of pages. The vast archaeology of the Faiyum, not an oasis and presumably included because it is often visited as part of an oasis tour, is allocated only two pages and seems like something of a waste of space that could have been better allocated to provide more detail about one or more of the oases.

Siliotti’s writing style is pleasantly clear and unfussy, and easy to digest.

If you want to more detail, are happy to spend rather more money and don’t mind the extra weight, Cassandra Vivian’s book The Western Desert of Egypt: An Explorer’s Handbook covers the oases as well as other areas of the Western Desert, including the Gilf Kebir (also published by the AUC Press).  For the Faiyum,  you might want to consider Siliotti’s 2003 The Fayoum and Wadi El-Rayan in the same series’ or Neil Hewison’s 2009 The Fayoum. History and Guide, both published by the AUC Press.

Given the number of photographs, illustrations, site plans and maps, it is amazing how much information Siliotti manages to pack into such a small book.

If you are lucky enough, politics willing, to be visiting some or all of the oases, this would be a great book to take along.  Day trips from Cairo are available to Bahariya, and slightly longer stays will take in the White Desert, so it is well worth having the book if you are considering even a short visit.

If you have already been to the oases, this will make a lovely souvenir.