By Gwyn Ashworth-Pratt
Published in Egyptological, In Brief, 21st March 2012 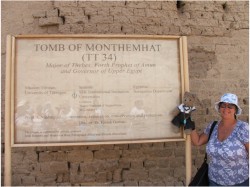 Not Harwa but his next door neighbour and contemporary Montuemhat

With fellow member of Sussex Egyptology Society, Amena, we made it to Chris Naunton’s talk to the Sussex Archaeology Society at the University of Sussex in Brighton on 15th March 2012 .  Once inside the venue, we found a superb lecture theatre with a welcoming and enthusiastic audience.

Chris called his illustrated talk Massive, Complex, Beautiful, Hidden.  His title described TT37, the Tomb of Harwa at South Asasif, Western Thebes where Chris has been involved over 4 seasons.

Whilst people were assembling, Chris enhanced the screen with some 1930s footage of Pendlebury and others,  which was a delight.  Along with introducing himself, he gave the Sussex Egyptology Society a good plug – thanks Chris.  Commencing with an introduction to the era, he explained that Thebes was one of the 3 main cult centres of Ancient Egypt.  Harwa was certainly a very important, non-royal of the Kushite Period c750-664BCE, when the kings of Wawat (Nubia) and their very large army gradually marched northward, conquering the whole of Egypt during the chaos of the Third Intermediate Period.  Statues of Harwa were amongst items in the cache found at Karnak and although only measuring c. 1 inch in height, showed great honour.  His titles included “Chief Steward of God’s Wife of Amun” and “King’s Right Hand Man.”

With no extant superstructure, this important tomb is just one very large hole in the ground, within walking distance of the Temple of Hatshepsut.  There are three tombs of the same period crammed together.  One of which, that of TT34 Montuemhat, I was lucky enough to have been at a special opening of a couple of years ago and was gobsmacked by its complexity and beauty.  A tremendous amount of work has gone into cleaning and conserving Harwa’s tomb but it has suffered more damage than its neighbour, not helped by being used as a storage facility in the recent past.  Amazing wall engravings are being pieced together and uncovered, which give an idea of the magnificence this tomb holds.

Modern day workmen were shown in the vast area of the courtyard, uncovered at 13 metres below the current surface level.  Moving into the Portico, which Chris described as “not in terribly good nick” the work has revealed decorations which provide insights into the use of illustrations instead of text alone.  A fine and detailed raised relief showed dancers engaged in different dances.  Interestingly, some of the unfinished art in red outline showed a craftsman complete with his workbench in front of him.  One finished scene, although damaged, clearly showed a man cutting the heads off fish, and another beautiful scene portrayed a fisherman with a large detailed net and a variety of different species of fish in the water below about to be caught.  One of the “find trays” was then shown to us, an open “box”, filled with sand and tiny but exquisitely decorated pieces of wall waiting to have “homes” found.

We were then moved in to the First Pillared Hall.  Chris used diagrams to lead us down into the detail.  Many verses of The Book of the Dead were inscribed into the walls and pillars.  Originally there had been eight square pillars, now disintegrated but surmounted with wooden covers to give an impression of the form.  A composite picture had been made to show the five side chambers with their preserved decoration which was exceptional.  With the pieces of decoration found, with the Hieroglyphic word for “hour” cropping up frequently, this jigsaw eventually made clear that extensive passages from the Book of the Dead had been inscribed.  Working from East to West it became clear that these were the Rituals of the Hours of the Night and back on the other side, from West to East were the rituals of the Hours of Day.

We were shown a sunk relief of Anubis holding Harwa by the hand to lead him forward.  The artwork was typical of the archaising of the 25th Dynasty but utilising a different grid pattern, making a human form with short stumpy legs and a kilt down to calf length, although the musculature was clearly depicted. In these scenes, Harwa was shown as a wealthy, successful, older man with pendulous breasts and ample belly.

Into the Second Pillared Hall again, copious columns of hieroglyphs were evidenced.  Chris showed us some before and after pictures, the before being covered in thick black muck and totally unrecognizable.  Once cleaned, Harwa was now depicted as youthful and in his prime.  The art of the period showed the same short legs but very broad shoulders, with the nipple on the side of his torso.

During the excavation, and totally unexpected, a magnificent stairway was unearthed.  This led to a lower chamber with a shrine of Osiris, the mythical first king of Egypt who became Lord of the Underworld after his death, so, subsequently the blessed dead also became, “The Osiris”.  Investigation then found shafts, which have still to be fully excavated.  The ladder(s) that one brave team member descended could only be described as Egyptian improvisation!  One shorter ladder had been tied with rope, to another to make “one” long ladder, and I think everyone in the audience shuddered to see it!

Carved from the natural bedrock, this initial three chambered buried tomb must hold more secrets.  Who knows, it may hold even more evidence of Harwa, maybe even a burial?

Chris Naunton is Director of the Egypt Exploration Society.

The lecture was hosted by Sussex Archaeology Society.