By Andrea Byrnes. Published on Egyptological, In Brief. 4th December 2013 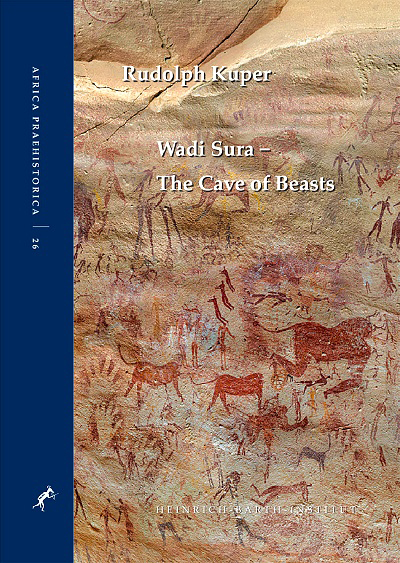 Every now and again a book comes along that is quite simply epic.  Either its scope is remarkable, or it has something profound to say, or it is superb record of a piece of excavation or survey work.  The enormous Wadi Sura – The Cave of Beasts fall into the latter category. It is a magnificent record of a painted prehistoric rock shelter in the far southeastern corner of Egypt, where Egypt meets Libya and the northern Sudan.  And it weighs a ton.

Some readers will be more familiar with the name Wadi Sura being associated with the Cave of Swimmers to the south, and up until recently the Cave of Beasts was called the Mestekawi-Foggini cave, after the men who found it. However, the researchers from the University of Cologne, who have done such excellent work at the Gilf Kebir have chosen to rename it Wadi Sura II.  The name “Cave of Beasts” comes from the strange headless creatures, an example of which can be seen on the cover of the book to the left.  It comprises an estimated 8000 images over an area of some 120 square metres on the northeastern edges of the vast Gilf Kebir plateau.

The book is edited by the much-published and respected archaeologist Rudolph Kuper, one of the major contributors to the archaeology of the area. The Heinrich  Barth Institut has published some magnificent volumes about the eastern Sahara, and this is their latest offering in the series.  The main aim of the book, which is to “make the complete trove of paintings and engravings in the ‘Cave of Beasts’ available for study purposes as well as simply for their enjoyment (Kuper p.82).  In this it does a superb job.

The secondary objective of the book is to provide a background account of the rock art and the surrounding archaeology.  This is done in a series of short articles.  There have now been a large number of papers and articles, and a small number of larger publications, as well as online resources, published about excavation and survey work in the Gilf Kebir area, but there has been no attempt to produce a much-needed volume that brings it all together in one place. The Foreword and 13 short pieces in this volume (pages 12-179) do not replace that need, focusing mainly on the rock shelter and the immediate area and the broader context of regional rock art.  You can fish around in the text to learn more about the archaeology, because prehistoric assemblages are used to help date the rock art, and there are photographs of some of these objects, but this is first and foremost about the site itself.

In Part 1, the site is introduced and put into its archaeological, environmental and artistic context.  At the same time methodologies, techniques and strategies are also discussed.  The chapters are, briefly, as follows:

Rudolph Kuper’s Foreword introduces the book, outlining the principal aims of the project, this volume and the volume that is planned to follow it.  He makes the important point that one of the aims of the book is to “provide a safe foundation for possible informed interpretation, instead of constructing hypotheses on the basis of arbitrarily selected motifs or scenes.”

The second article, also by Kuper From Nowhere to Hollywood- The Story of the Wadi Sura looks at the discovery, naming, exploration and uses of the Gilf Kebir.  Kuper touches on the archaeology and environment of the Wadi Sura area, but this is described in more details in later chapters. 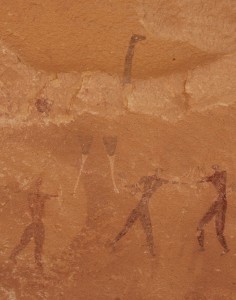 Andras Zboray’s contribution Wadi Sura in the Context of Regional Art puts the art of the Wadi Sura caves into a wider setting. The Gebel Uweinat, to the south, was within easy reach of the Gilf Kebir and the possible relationship between these two and other areas is an important area of research for forming relative chronologies and considering links between areas.

Förster and Kuper next consider the intellectual background of beliefs and the difficulties of interpretation in Catching the Beasts – Myths and Messages in Rock Art.

Next, Kuper describes the history of the project of The Cologne Wadi Sura Project, the task it has set itself and some of the approaches and techniques applied.

In The Archaeological Survey: Landscape and Context of Wadi Sura’s Rock Art, Riemer and Bart assess the achievements of five field campaigns, and the archaeological and rock art data they have added to database of knowledge about the Gilf Kebir, considering it in the light of topographical and geomorphological aspects of the landscape.

Riemer’s article Dating the Rock Art of Wadi Sura attempts to tie in the rock art with pottery manufacture in the Western Desert, with a view to building an absolute time frame for the art.  He also looks briefly at lithics.

In New and Integral Approaches to rock Art Recording as Means of Analysis and Presentation Leisen et al tackle how rock art should be recorded and presented, and discuss what techniques were used at Wadi Sura II.  High resolution photography and 3-D laser scanning are amongst the techniques discussed.

Förster’s Figuring Out computer-Aided Rock Art Recording and Analysis describes the approaches that have been taken to incorporating individual images into a database and the problem of doing this both accurately and with reference to the rest of the complex composition.

A topographical and geomorphological analysis of the locations where rock art is found follows in Riemer’s Rock Shelters: Locations of Rock Art.

In Paints and Pigments in the Rock Art of Wadi Sura Krause et al present their analysis of the main colours favoured, the locations from which they were sourced and how they were processed.

Conservation of Rock Art –  A Holistic Approach lays out the difficulties of this particular field of work.  The formation of a Site Management Plan and its role in preserving and conserving the Cave of Beasts rock art are presented.

A depressing article by Kuper, Visitors and Vandals – the Impact of Desert Tourism describes how tourists have been allowed to cause havoc with previously undisturbed archaeological sites, although the horror story is alleviated somewhat by his account of attempts to implement various solutions.

The longest chapter by far is Darius’s Wadi Sura in its Environmental Setting, which goes into great detail about the environmental setting of Wadi Sura, past and present.  This particular chapter will be of great use for anyone researching Egypt’s southwestern Western Desert, as it is one of the most detailed accounts available of the conditions in which people of the mid Holocene lived and worked. 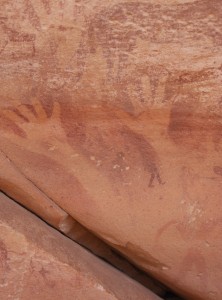 In Part 2 we move on to the primary objective of the book – the photographic record.  The photographs of the site take up the bulk of this gigantic book, spanning pages 80 to 542.  The photographs are preceded by a fold-out user guide.  On one side is an explanation of how the photographs are four short sections:  Scale, Grid System, Fixing Co-ordinates and Selected Scales and Figures.  It is a good idea to read this, as it explains how to get the most out of the photographic record.  On the reverse side is a photographic representation of the five panels of the rock shelter that make up the photographs.  The photographs are beautiful and very high quality, allowing the reader to spend time with various parts of the rock shelter’s art and explore aspects of it that they might otherwise miss.  There are a series of scenes towards the end, which provide selected views of some of the figures and groups, particularly when these are interrupted by the grid system. There are also 2 pull-out poster-sized inserts at the end of the book, inserted into a slot in the back cover.  These give wide views of parts of the scenes, one at the scale of 1:4, the other at near life-size.  These are excellent for forming a realistic view of what the detailed images captured throughout the book are like when seen in real life.

What is the potential audience for such a book?  The obvious answer is that libraries belonging to universities and archaeological institutions with departments specializing in north African prehistory and in any form of rock art will purchase a copy for reference purposes. .  The rock art photographs will probably be of use only to those with a specific interest in northeast African rock art, but the articles, which detail survey, recording and conservation approaches and techniques and attitudes to dating and interpretation will have a much wider audience, addressing as they do universal issues about how rock art can be captured, analysed and incorporated in the the wider archaeological dataset.   On a distinctly trivial level, it  could also serve as a wonderful albeit somewhat lavish souvenir for those who have visited the area (none of the HBI books are bargain-basement purchases – prepare to pause for thought should you check the price).

I find it difficult to assess on aesthetic grounds alone, should that be a concern.  Each individual photograph is beautiful, but because the book divides the rock shelter into a grid system and shows aspects of the grid on each page, it is incredibly difficult to get a sense of the whole.  When you stand in front of the original there is no sense of a structured composition, and it is obvious that many different periods of painting are represented, but the dividing up of the entire rock face into fragments means that you are appreciating details rather than the impact as a whole.   That is not the fault or the job of the book, which is designed to record what it can for posterity, and to make the details highly visible, but it is still worth noting that by dividing up the rock face into convenient parts using a grid system, the dramatic impact is eliminated.

A section of Wadi Sura II in 2008. A poor photograph, but it gives an idea of the scale and span of the rock shelter’s art, which extends out of shot to top, left and right and, it is now known, below the level of the sand dune as it is shown here. Photograph by Andrea Byrnes

The quality of the production is exceptional, as it usually is with HBI books.  The large format, the thick silky pages and the superb colour reproduction are all key factors in what makes this book such a quality publication.  The photographs are excellent and there are plenty of diagrams, illustrations and all-important maps. 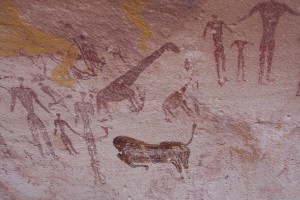 Overall, this is a beautifully produced book, with a lot of short but informative and superbly illustrated articles, and as well as providing an invaluable record of the cave’s art, will be an excellent reference volume for academic institutions and students.  On a trivial level, those with deep pockets who have visited the area, it will also make a very fine souvenir.

We do not normally give purchasing details for books, but there are so few outlets for this volume that it seemed only fair to readers to do so on this occasion.  If you want to purchase a copy, you can either so by phone or fax, direct from the Heinrich Barth Institut or by paying online from FJ Expeditions, which is owned by one of the book’s contributors.