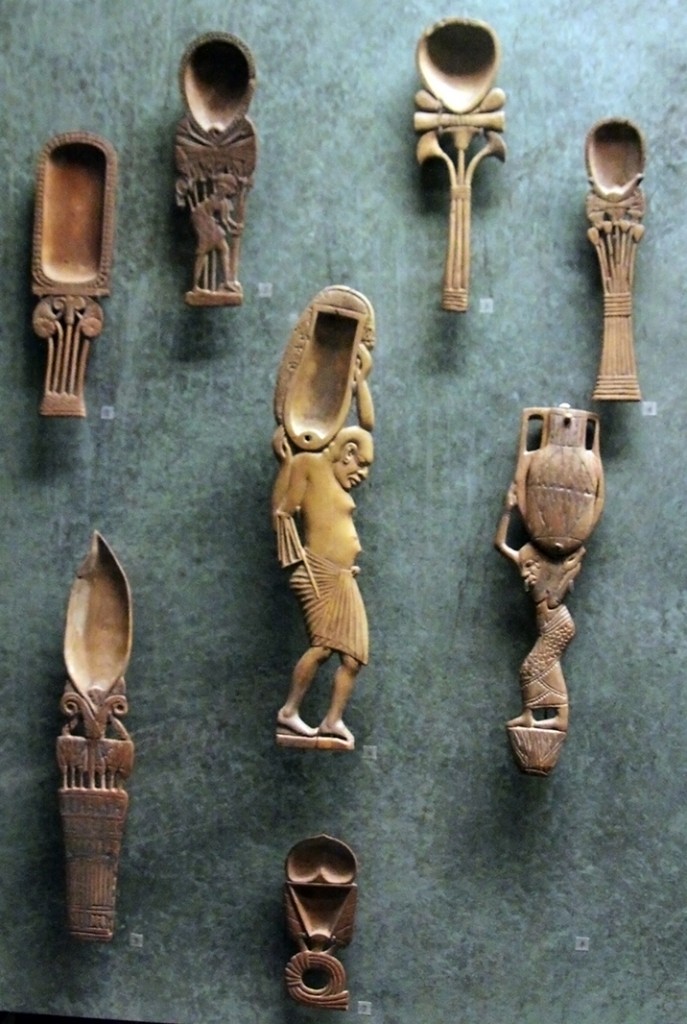 Figure 1. Part of the Louvre’s display of cosmetic spoons

By Andrea Byrnes. Published in Egyptological, In Brief  22nd February 2014

I was in the Louvre in Paris recently and was impressed by the exhibit of cosmetic spoons, so beautifully carved and so sinuously expressive (Figure 1).  Although they are usually referred to as cosmetic, ointment or unguent spoons, their function has never been definitively established and they come in a variety of forms.  This short article is a brief introduction to a much wider topic.  You can click on any of the photographs to see the larger image; figure credits are shown at the end of the article.

All of the cosmetic spoons share one common feature – a shallow reservoir, often with a lid that slides sideways, fixed in place on a pin.  The lid is frequently missing, but where it existed its presence is usually indicated by a hole in at the end of the bowl where the pin once sat. Many of them had handles, either long and thin or short and wide, but some, apparently part of the same genre, had no handles at all.  They are usually elaborate works of art, carved with figurative, symbolic and decorative motifs, and many were apparently never, or very rarely used.   Some were painted, and they were usually made of wood (usually locally available types such as sycamore, tamarisk and acacia), sometimes with ivory inlays, but could more rarely be made of ivory or stone (Figure 2).

There are several distinct types.  Of these, the swimming girls seem to form one distinct class.  A slender girl, naked except for a few decorative items, lies on her front, her arms outstretched before her, appearing to float or drift, her toes pointed.  She holds the bowl in her hands, which is usually decorated (Figures 3a and 3c).  Sometimes the bowl is carved.  The forms of duck or goose and gazelle are popular motifs (Figures 2 and 3b). The swimmer’s hair is sometimes elaborately dressed.  She is often accessorized with a girdle and necklace.  Some writers have interpreted her pose as swimming, or being pulled through the water.  The representation of young girls wearing only a girdle and necklace with an elaborate hair style echo some tomb scenes that show harem or servant girls on the side of marsh hunting scenes in tombs of nobles.

Another class includes the most elaborate of the spoons, which have short but wide and very elaborately carved handles. The handles may show relatively simple motifs, like those shown in Figures 4b and 4c, but can often show scenes of daily life, forming a complete vignette, sometimes developed around the shape of an ankh (Figures 4a and and c; Figures 10a, c and d).  Others show deities like Bes or Hathor (Figures 7a, b and c), again at the centre of scenes dominated by familiar motifs.  These spoons have at least one bowl, but some examples are equipped with more (Figure 4b).  Where the handles show complicated scenes, the themes are often familiar, but the people are often bent and curved, old and young, fat and thin, and there is often vibrant personality in the pieces, which may be full of life, movement and imagination. 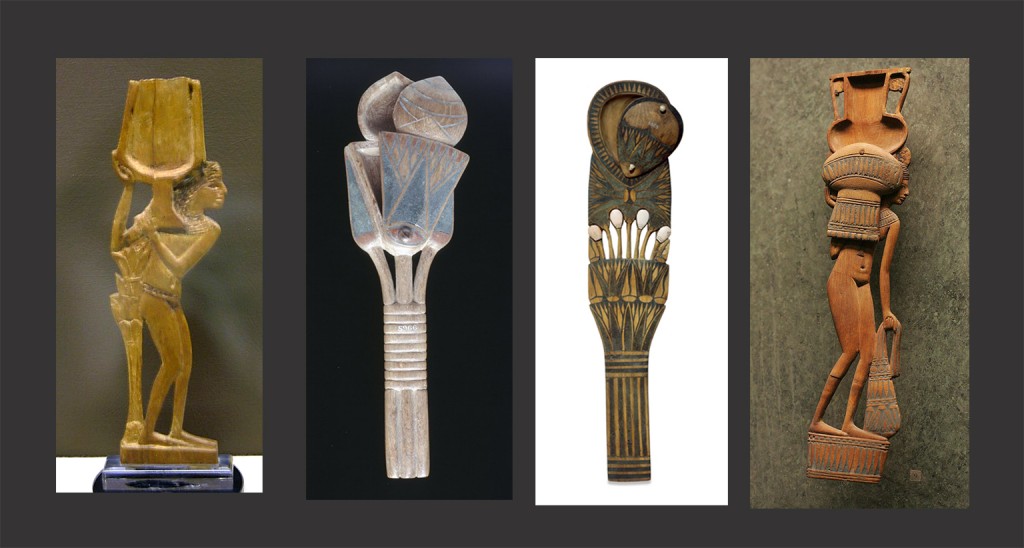 Finally, those without handles are usually carvings, usually representing animals, where the main body of the animal makes up the bowl of the container. Geese or ducks, oryx, ibex and gazelle are all popular themes (Figures 5 and 9).  The features of the animals, their heads, legs and tails, are frequently wrapped around the bowls., forming decorative frames.  The trussed gazelle and the cooked duck or goose are both in the style of offering scenes, but others appear to be alive and kicking.

There are some that don’t fit easily into any of the above types but are still recognizably part of the same group of objects, such as the canine holding a fish in its mouth (Figure 6). 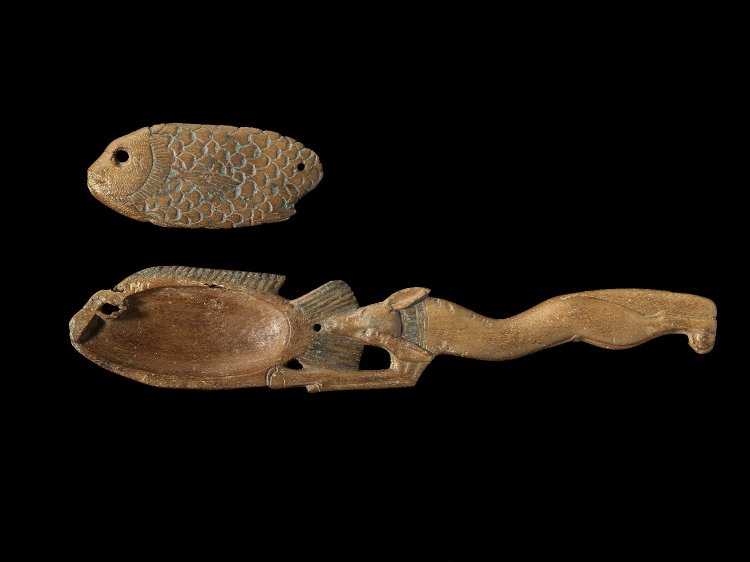 Figure 6. Spoon composed of a jackal with fish in his mouth

Decorated spoons are known from the Old and Middle Kingdoms but most date to the New Kingdom.  The majority of the New Kingdom cosmetic spoons appear to date to the late Eighteenth and Nineteenth Dynasties, although many are unprovenanced.  As many of the finer examples show no signs of use, this may imply that the more finely crafted examples were valued so highly that they where they were used only rarely, if at all.

Amongst the swimmer spoons, there is not a great deal of variation in the themes, and most of the differences lie in the design of the bowl, which is usually rectangular, sub-rectangular or ovoid, may be carved into the form of an animal, and is frequently decorated.  Popular themes engraved into the bottom of the bowl are tilapia fish and lilies, both associated with ideas of rebirth and regeneration.

Figure 7. Spoons with handles in the form of Hathor and Bes

Across the range of the spoons with the complex handles, the principal themes chosen for the spoons are recurrent and quickly become familiar.   Some of them have very popular amuletic themes.  Many appear to be informal images connected loosely with with Hathor, the royal mother, daughter of the sun god Ra and goddess of female sexuality, birth, rebirth and renewal.  She was most closely linked with beauty, the female form and femininity and, when enraged, had to be calmed with music and dancing.  Amongst the themes associated with her on the spoons are beautiful girls, many of whom play musical instruments, papyrus thickets and symbols of renewal and depictions of the deity herself, including a spoon from the Metropolitan Museum of Arts in which the head of Hathor in the form of a sistrum faces outwards, flanked by two rearing serpents in profile (Figure 7a).  Another deity to be depicted is Bes, the dwarf deity, who was often an amulet for the protection of women and children and safety in childbirth (Figures 7b and c). 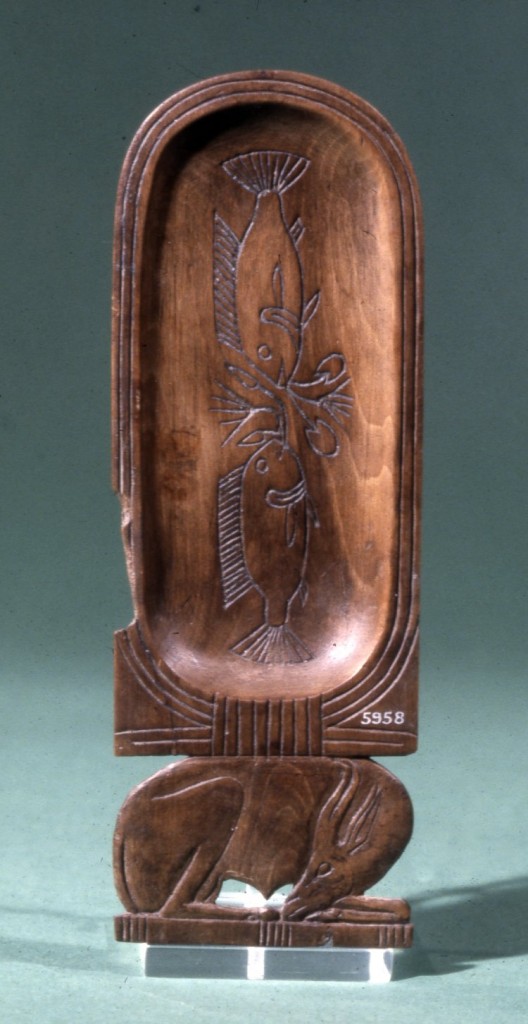 Figure 8. Spoon bowl in the form of a cartouche, with tilapia and water lily motifs in the bowl

Many themes seem to be based on marsh scenes, familiar from elite tombs like those of Nebamun and Nakht.  Popular themes are again tilapia fish and lilies, which were associated with fertility and appear frequently (Figure 8; Figures 10.   The lily (Nymphaea cerulea), sinking into the water at night and rising during the morning, is another symbol of rebirth associated with the rising sun, healing and the deity Nefertum. An excellent example is the British Museum’s EA5966, where a water lily is topped with a mandrake fruit, both forming a lid over two small reservoirs (Figure 4b).  Papyrus stalks, associated with ideas of youth, vigour and life, are also consistent with these themes.   Rebirth and regeneration are also indicated in the recurrent theme of the ankh symbol of life and eternnity, which is often incorporated into the overall design of the object, the bowl representing the loop at the top of the stem (Figure 7c; Figures 10a, c and d).   The frequent appearance of the royal cartouche symbol, often surrounding the bowl of the spoon, is a version of the shen symbol, which represents protection and eternity, and often has a strong solar connotation (Figure 8).

Other spoons portray themes that are less easy to relate to Egyptian symbolism.  Maspero provides a superbly evocative description of the Louvre’s man carrying a sack (Figure 10b): “the slave with his thick lips, his high shoulders, his flat nose, his heavy, animal jaw, his low brow, and his bare, conical head, is evidently a caricature of some foreign prisoner. The dogged sullenness with which he trudges under his burden is admirably caught, while the angularities of the body, the type of the head, and the general arrangement of the parts, remind one of the terra-cotta grotesques of Asia Minor.”  He is very dramatic but it is not easy to classify him in ideological terms.  He is by no means an isolated example, and other cosmetic spoons are equally fascinating but defy attempts to characterize them in terms of religious iconography. 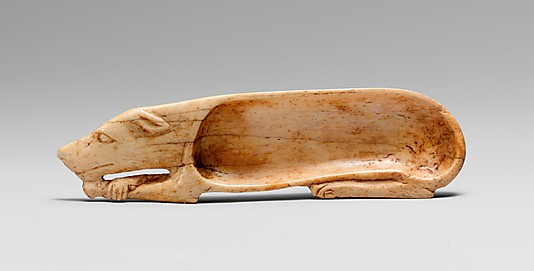 Figure 9. Spoon in the form of a dog

In 1843 Gardner-Wilkinson referred to the entire class of objects as “boxes” but whether they are better characterized as spoons or containers is somewhat moot, in the absence of any definitive evidence of what they contained or any pictorial sources.   One book describes them as “luxury objects, ostensibly temporal and frivolous” (Egyptian Museum and Papyrus Collection, Berlin) but it is possible that they were used in religious rites, or kept as good-luck charms.  They have been found in both temples and tombs and their very fragility argues that they would have been used only for special occasions.  They were too shallow to contain anything in volume and it is possible that they may have had ritual or ceremonial roles in the lives of their owners, tied in with the symbolism shown on the handles.  The ritual theme is supported by the bowls framed by trussed animals, which resemble offering scenes from tombs.

The function of these objects remains unclear, but the skill that went into their design and production, and their presence in both temples and tombs, indicates that not only were they were important to their owners but that they may have had a role beyond the purely prosaic.  Whatever their role, they are a joy to behold. 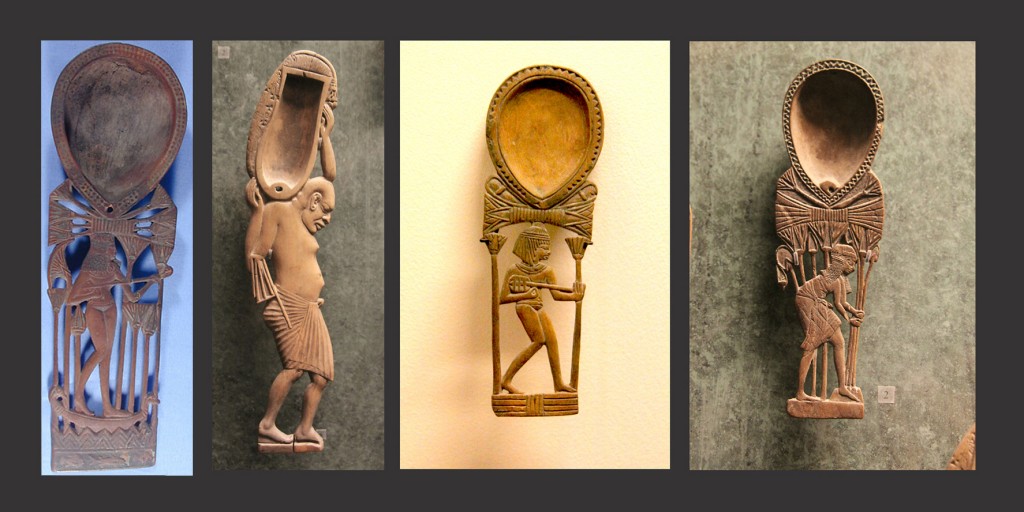 Figure 1. Exhibit at the Louvre. By Andrea Byrnes

Houlihan, P.F. 1996. The Animal World of the Pharaohs. Thames and Hudson.

Maspero, G. (Translated by Edwards, A.B.) 1895.  Manual of Egyptian Archaeology and Guide to the Study of Antiquities in Egypt. New Edition, Revised and Enlarged by the Author. D.C.L. OXON.