O45.1: An Ancient Industrial Estate Review by Kate Phizackerley.  Published on Egyptological, Magazine Reviews, Edition 3, 7th December 2011 Introduction As described in the overview of the 2011 AWT Conference which I co-authored with Andrea Byrnes (see bottom of this review), Dr Paul Nicholson spoke about his excavation of the Amarna site designated O45.1, which […] END_OF_DOCUMENT_TOKEN_TO_BE_REPLACED

Review by Kate Phizackerley.  Published on Egyptological, Magazine Reviews, 7th December 2011 (Edition 3).   Introduction Many people were looking forward to hearing Jo Marchant speak about the DNA tests undertaken by Drs Zink, Pusch et al, and she didn’t disappoint.  She was an outstanding speaker.  She opened her talk by describing DNA itself, a […] END_OF_DOCUMENT_TOKEN_TO_BE_REPLACED 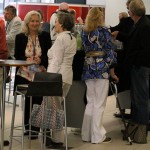 The 2011 Ancient World Tours Conference was held at UCL, London over the weekend of 3rd and 4th September and focused on Amarna. The authors attended and offer this overview of the conference. Over the next ten days or so, we shall also be publishing detailed reviews of about half of the sessions in the Magazine section of Egyptological (and will formally become part of the next edition). END_OF_DOCUMENT_TOKEN_TO_BE_REPLACED