Many people were looking forward to hearing Jo Marchant speak about the DNA tests undertaken by Drs Zink, Pusch et al, and she didn’t disappoint.  She was an outstanding speaker.  She opened her talk by describing DNA itself, a topic which need not be repeated in this review, but which was useful for those in the audience who do not have a scientific background. 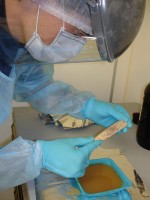 Marchant noted that the first study of ancient mummy DNA was conducted by Svante Pääbo in the 1980s whilst he was studying for his PhD at the University of Uppsala in Sweden, but is now himself sceptical of his results.  The study of ancient DNA remains a subject of academic debate, with some experts believing that it is not possible to reliably sequence ancient DNA.  Marchant was at pains to highlight that there are two camps, with a stark division between those who work on ancient DNA, especially human DNA, and those who believe it is not technically possible to produce valid results, with some labs refusing to take commissions.  Throughout her lecture, Marchant presented the viewpoint from both sides of the debate, but her own position seemed to be that of a sceptic.  The lecture needs to be considered in that context: an ancient DNA adherent might well have been more positive about some of the findings.

Contamination is a problem with studying DNA, which is why labs are such sterile environments and why controls should be run to eliminate the technicians’ DNA.  Marchant described an early attempt to analyse the DNA of a woolly mammoth.  It was later discovered that the published sequence was the project leader’s own DNA.  Marchant explained how a process called Polymerase Chain Reaction (PCR)works by amplifying a small amount of DNA typically extracted from ancient, degraded samples in order to  improve the size of the sample available for testing, and suggested (without discussing the evidence) that PCR is particularly susceptible to contamination from ancient DNA.

She explained why DNA from Egyptian mummies is particularly controversial.  Mummies have been subjected to quite violent chemical processes during mummification, which are not entirely understood.  (This was covered more extensively by Stephen Buckley in an earlier lecture.)  They are then stored in fiercely hot, sometimes also rather damp, tombs and may have been disturbed and handled both in antiquity and by modern archaeologists.  All of these conditions are bad for the preservation of DNA and Marchant said that computer studies have shown that DNA in Egyptian mummies can be preserved for no more than 500 years.  “Preserved” in this case means that DNA strands are still long enough for analysis by the PCR method – over time the long strands of DNA break down into shorter and shorter pieces, eventually becoming too small for the minimum length for PCR analysis.  (See conclusions at the end of the article for my views on this.)  Scientists like Albert Zink and Helen Donoghue disagree and are still publishing papers .  Marchant says that those scientists believe, instead, that mummification acts to preserve DNA. 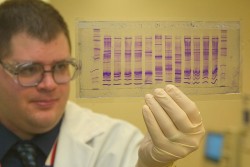 As most readers will know, the DNA of Tutankhamun and that of a dozen or so contemporary royal mummies was analysed and the results published in The Journal of the American Medical Association (JAMA) during 2010.  The project was funded by the Discovery Channel for a series of TV documentaries and Marchant observed that some commentators are concerned that commercial considerations may have increased the pressure on the team to report newsworthy findings.  The analysis was undertaken in Egypt by Egyptians, with Albert Zink and Carsten Pusch acting as consultants.  The approach adopted was DNA fingerprinting – known as micro-satellite analysis / short tandem repeats (STR).  For instance one of the loci examined is termed locus D13S317.  A locus is the location in a DNA sequence of a specific gene. The same sequence of DNA can repeat at this location a variable number of times, from 7 repeats in some people up to 16 repeats for some others.  DNA, and therefore the number of repeats, is inherited which is why it can be used to assess parentage given analysis of a sufficient number of loci. The team published the “most likely” family tree based on their reported findings and this is consistent with previous blood type analysis.

The study was criticised by a number of experts, and a subsequent JAMA edition carried a number of highly critical letters from other geneticists.  Marchant listed the following key criticisms:

Marchant reports that Zink has stated that the tests did not get the same results each time they were run and the results reported in the JAMA paper are those the team adjudged “most likely” based on “majority rule”.

On the positive side, the team didn’t find a Y-chromosome for any of the female mummies [author’s note: assuming that KV55 is male of course, and not all researchers yet are convinced of this].  This is encouraging as many of the team  members were male so the results have not been contaminated by their Y-chromosome results.  Marchant also reported that the team were expecting to publish mitochondrial DNA results during 2011 and that Zink believes the royal mummies are a special case, with DNA preserved by the exceptional standard of mummification the elite enjoyed.

Interestingly, Zink told Marchant that he does not believe that KV35YL can be Nefertiti but he is starting to suspect that KV21B could be – although he reports needing more results before this could be published.

The next generation of DNA tests have the potential to be successful with strands as short as 30 base pairs (c.f. 100 with PCR) so Marchant hopes that these tests might in time be used. 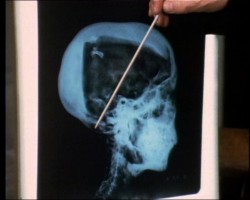 Marchant concluded her talk by looking at Tutankhamun’s bones.  His bones are broken in many places so it is hard to distinguish between pre-mortem breaks, damage during mummification and subsequent breaks.  His sternum is missing and several ribs are broken.

This is a subject of deep interest to me, so I wish to follow the review above with a personal assessment.  There is no doubt that Marchant was one of the most skilled presenters and her ability to make technical matters accessible to a lay audience was very much appreciated by many.  Her talk was widely applauded by attendees in conversations over coffee afterwards, and deservedly so because it was very, very good.

At the same time, I was rather disappointed for some of the same reasons for which I am unhappy with the original JAMA paper.  While Marchant explained DNA and DNA testing with consummate skill, she made no attempt to explain the maths, or the various mathematical models she relied upon.  For instance, she cited a computer study that showed that ancient DNA isn’t preserved beyond 100 years but didn’t state the source, the assumptions or even the results other than the headline.  Similarly, while I agree with her dislike of Zink’s use of “majority rules” to present uncertain PCR results, I disagree with her conclusion that this is a major issue.  Techniques like Bayesian inference can wrest results from uncertain data.  What is clear, and Marchant herself made the point, is that it is important that Zink and colleagues publish the raw data so that independent analysis of the results can be undertaken.

For those reasons, I think Marchant leans overly to a sceptical position.  There is indeed a great deal to criticise in the methodology and publication of the DNA study, and I have been quite vocal in my own criticisms on my News from the Valley of the Kings blog, including DNA Shows that KV55 Mummy Probably not Akhenaten (News from the Valley of the Kings, Phizackerley, 2010).  My personal view is that the team did successfully sequence DNA from Tutankhamun and the other royal mummies but that the level of confidence in the results was badly reported: some of the results may not be as certain as the paper indicates and any partial results omitted from the paper might still be valuable if published and submitted to more detailed mathematical assessment.

In short, Marchant’s excellent talk was presented from the standpoint of a geneticist but overlooked that mathematics is an equally important discipline in interpreting ancient DNA results.  It would be wrong to be overly critical of Marchant on this point.  Within the context of a lecture to an enthusiast rather than academic audience, there was little scope to cover the mathematics in detail but I would have preferred that she had at least identified the areas in which the mathematics in the published paper could have been more thorough.

DNA Shows that KV55 Mummy Probably not Akhenaten, News from the Valley of the Kings, Phizackerley, 2010, http://www.kv64.info/2010/03/dna-shows-that-kv55-mummy-probably-not.html