A few thoughts about duality and the desert

By Andrea Byrnes. Published on Egyptological on 11th July 2011.

Brian Alm’s excellent introductory article on ancient Egyptian religion in Edition 1 of Egyptological, the first in a series of five articles on the topic, includes a section on duality.  I have often pondered the extent to which the Egyptians segregated religious belief, which potentially formed an explanatory but idealized model of life, from everyday pragmatism.  Duality is a good case in point. The Egyptian deserts, for example, arid, largely barren of vegetation, populated by poisonous snakes and scorpions, and associated with funerary activities, are less clearly separated from the Egyptian Nile-based economy than might be implied in religious texts.

Duality and the Desert 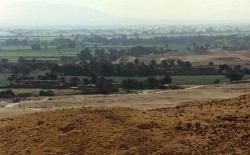 Where the black land meets the red land

Brian makes the point that the sandy “red” land of the desert and the dark silt-covered “black” land of the fertile Nile flood zone can be seen today as the difference between the green acres of verdant growth and the endless sands beyond.    It would not be surprising if the Egyptians really did see this contrast as a significantly symbolic division between life and death, wet and dry, prosperity and poverty, good and bad, and order (Maat) versus chaos (Isfet). But this description of opposites does not reflect the working relationship that Egyptians had with the desert, a point clearly made by John Darnell in his chapter on deserts in Wikinson’s The Egyptian World.

Egypt has three desert areas, each with dramatically different topographies, characteristics and resources.  The Eastern Desert is composed of the Red Sea Hills with high desert meeting low desert before reaching the Red Sea Hills to the east and the Nile to the west.  The Red Sea Hills, the result of uplift events, have brought rich seams of stone and mineral resources to the surface, which were formerly beneath the Earth’s surface.  The Western Desert, by contrast, is mainly flat, puntuated with desert dunes and corridors, with sandstone outcrops, until it reaches first the Oases and then, possibly beyond the reach of Pharaonic Egypt, the volcanic area of the Gilf Kebir.  Sinai has a mountainain zone to the south, a plateau occupying the centre of the peninsula and hills and dunes to the north, with a wide plain along the Mediterranean coastline. 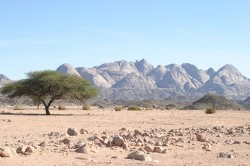 The Eastern Desert was heavily exploited for its stone from the Predynastic period onwards.  A form of greywacke unique to the Wadi Hammamat was used for fabricating palettes from the Badarian (c. 4400BC) well into the Early Dynastic and beyond.  (See my article A beginner’s guide to dating the Predynastic – Part 1 for an explanation of Predynastic dating.)  The most famous example is the Palette of Narmer.  A vast range of other stones were also used, with expeditions being sent by kings from the Old Kingdom onwards, some of which included 1000s of skilled administrators, supervisors and craftsmen, haulage animals and provisions.  Mineral resources included precious and semi precious stones – for example, jasper, emeralds and amethysts – and gold.  All were extracted by dedicated teams, some of whom lived in specially built villages whilst working the mines. 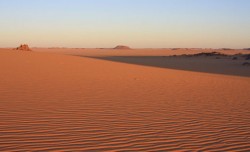 The Western Desert had less to offer in terms of raw materials, but the oases were both fertile and strategically located at the western front of Egypt’s empire, a semi-circle of occupied centres, some of which appear to have been used to fend off potential threats from Libyan tribes.  A major Old Kingdom settlement, for example, was established in Dakhleh Oasis at Ain Asil, and wines produced by vineyards at Dakhleh were found at Amarna and in the tomb of Tutankhamun.  The Western Desert was also the only source of Libyan Glass.

The Sinai peninsula is best known for the turquoise mines at Serabit el Khadim, but the desert regions were also used to exploit malachite and significant quantities of copper ore.  As well as routes to these mines there was a major road that crossed the top of the Sinai linking Egypt to the Near East, the Horus Road. 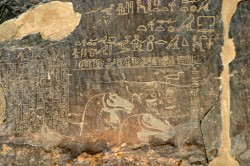 A network of routes grew up to access the stones and minerals of the Eastern Desert and Sinai, the oases of the Western Desert, and the important lands of Punt, Yam and southern Nubia.

In the Eastern Desert the key routes throughout the Pharaonic period were the Wadi Hammamat, which stretched from Coptos to Quesir on the coast, still used today, Qena to Safaga and Edfu to Mersa Alam.  The situation in the Western Desert is more complex.  Routes through the desert needed to link the oases with each other, to link the oases to the Nile and to link the southernmost oases with routes leading to the south.  In addition, routes across the desert at the Nile’s u-shaped Qena curve cut provided short cuts for those on foot with pack animals, and the Abu Ballas Trail, which extended from Dakhleh oasis towards the Gilf Kebir. 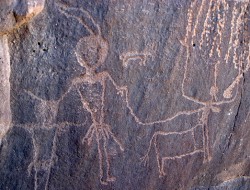 Finally, the desert edges, which had been used for hunting and herding doing the slightly more humid early Predynastic period, as attested to by the extensive rock art, were almost certainly used for herding as well in the Pharaonic periods.  Herds, particularly of sheep and goat, would have been segregated from the crops during the growing season to prevent them demolishing the fields by moving them to the desert margins, and at times of occasional rainfall were probably herded even further afield.  In the Eastern Desert camel herders still lead successful nomadic lifestyles, in spite of the apparent aridity.  Anthropologist Joseph Hobbs, for example, has written a fascinating account of the Ma’aza Bedouins who live in the northern half of the Eastern Desert. 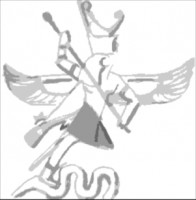 Seth in the form of a falcon spearing a serpent at Hibis Temple, Kharga Oasis, Western Desert

Perhaps because of this enforced relationship with the desert, some Egyptian myths catered for the difficulties of the desert experience.  In one myth Ra and the eye goddess, often in the form of Hathor, have a disagreement and she flees to the desert until Ra is eventually able to bring her home.  The solar eye was an important deity in desert areas, perhaps because desert routes used by travelers were considered to be the routes by which the eye goddess might have returned to the Nile.  Deities directly responsible for the deserts were Seth, Hathor and Horus.  Seth was associated with deserts from a very early stage and that may have helped consolidate the negative characteristics of dispute, trickery and chaos often associated with him.  In his desert role he was, however, the personification of strength and power, a protector figure.  Hathor was a deity of foreign lands, overseeing trade and resource exploitation beyond the Nile valley, and was worshipped as a protector of desert miners. Horus, as a deity of the horizons and the rising and setting sun was also a god of the east.  There were a number of deities specifically associated with the Eastern Desert.  Sopdu, “lord of the east” was a protector of outposts in border regions, represented as a falcon.  The ancient deity Min was also a deity of the Eastern Desert, his image shown frequently in the Wadi Hammamat.  In the Western Desert, the ancient god Ha was particularly important in the oases as a personification of the desert and a protector from invading nomads.  Egyptians may have been intimidated by the desert, but they had an armoury of spiritual assistance at their disposal to help with it.

In conclusion, Egyptians accepted that the desert provided benefits and absorbed desert areas into their military strategy and into their economic and artistic lives in a way that does not occur today.  They also provisioned for the existence of the desert and the need to engage with it in their mythology. As Brian made clear, Egyptians accepted often apparently conflicting ideas quite readily when expedient.  Just as in the Contendings of Horus and Seth the good deity Horus was not above pulling some fairly dirty tricks to get his own way, the troublesome deity Seth, in his desert role, was a protective force with the strength and power to overcome adversity. The duality so clearly expressed in so much of Ancient Egypt’s religious belief is not always reflected in how the Egyptians lived their lives.  The Egyptians had a sophisticated way of describing their world, and a very pragmatic way of exploiting it.  Within any functional economy and society, perceptions and beliefs may be influenced by religious doctrine but what act directly upon decisions and actions are circumstances, necessities and desires.

Sampsell, B. M. 2003, A Traveler’s Guide to the Geology of Egypt, American University in Cairo Press

Wilkinson, R.H., 2003, The Complete Gods and Goddesses of Ancient Egypt. Thames and Hudson.

All photographs by Andrea Byrnes