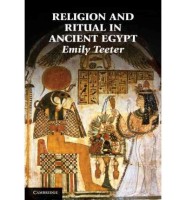 Religion and Ritual in Ancient Egypt by Emily Teeter

If you’ve read Emily Teeter’s other books on Egyptology or her catalogues for the exhibits she manages at the University of Chicago’s Oriental Institute, you will expect this book to be full of great detail and thorough scholarship, delivered with ease in a flowing style that makes it a fast read and enjoyable throughout. If those are your expectations, you will be rewarded. Her characteristic approach is a pleasant combination of superb research and clear, unencumbered prose — you don’t have to fight the text to get the substance out of it. It’s painless, not to say entirely effortless, education — this is Egyptology, after all.

Teeter drills down to great depth in certain topics, so you get loads of information in remarkable detail for a book of just 200 pages, but I would not call this the first book people should read if they’re just getting started in Egyptology, because it presumes some prior reading elsewhere in dynastic history and fundamental concepts. The book does touch on some basic background ideas, as needs for a brief overview arise, but on the whole it’s more like an archipelago of selected matters, namely priests, temple festivals and rituals, death and funerary rites. Indeed, Teeter says in the Introduction, “My goal is to examine how the manifestations of religious belief were incorporated into the culture,” and also “how ancient Egyptian religious beliefs and practices functioned in the community.”

And the book does just that. We do get a very clear picture of the life of the people and the beliefs and practices that governed their world, a world in which religion informed virtually every aspect of being Egyptian, in this life and its continuation in the next. What this book does that’s relatively unusual but extremely valuable is to look at non-royal funerary culture, so we can see how the people (that is to say, the upper crust, at least) dealt with death through ritual, magic, and tomb building.

Since the religion of ancient Egypt is the subject of my series, currently running on Egyptological, the editors asked me to review this book, which came out a couple of months after the series was planned and the first part was published. Consequently I read it with great anticipation and interest, and found that Teeter and I track very closely in our views of this massive topic.

For example, in comparing the Egyptians to the Greeks, she says: “With their tradition of adversarial discussion, the Greeks would debate one theory against another to reach a new, single synthesis — a process that was alien to the Egyptians, who, through accretion, would layer one possible solution on another without discarding any.” That is a key point in Part 2 of my series, which is in London now, awaiting the next edition of Egyptological. But I love that word “layer” and wish I’d thought of it myself, because it describes the Egyptian way of thinking exactly.

To give further indication of the detail you will encounter in Teeter’s book, I would note that she covers many of the same topics that I do in the forthcoming parts of the series, especially Parts 3 and 4, but does it in 80,000 words against my total of about 8,000 for much the same range of subjects. This book’s depth of scholarship is attested in 374 endnotes and a nine-page bibliography that would make a good starting point if you were establishing a research library.

For the casual newcomer to Egyptology, I would recommend starting with some of the large, one-volume books written for the general audience, which cover the breadth of ancient Egypt — or use my series in Egyptological as a foundation. Then come to books like this for the depth. Otherwise the learning experience could be rather episodic more than developmental, without a framework to keep things clear — especially given the nature of the cultural history of ancient Egypt, which is incredibly long (more than 3,000 years) and extremely complex. Reading a more basic and developmentally oriented text before, or along with, Teeter’s Religion and Ritual in Ancient Egypt would, I believe, offer considerable complementary value.

For the professional Egyptologist or dedicated amateur, dig in.