Review by Andrea Byrnes and Kate Gingell.  Published on In Brief, Egyptological, on May 31st 2012.

This programme has been airing for several years and  it will doubtless be aired again for anyone who wants to see it.  I also understand that it is available in some countries on DVD.

The Pharaoh Who Conquered the Sea follows the activities of Cheryl Ward who decided that the only way to determine whether or not Hatshepsut’s expedition to Punt in the New Kingdom was a technically viable proposition was to recreate one of the ships shown on the walls at her funerary temple and test it on the Red Sea. 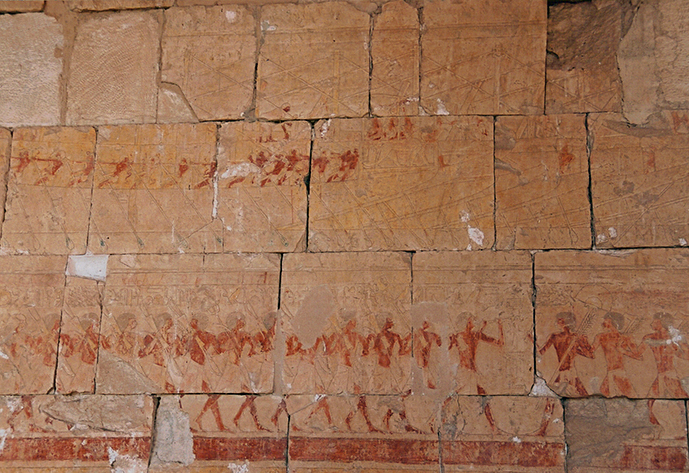 Hatshepsut was the female pharaoh of the Eighteenth Dynasty who built a remarkable mortuary temple at Deir el-Bahri, and used the walls to depict various accounts of her life and validate her reign.  One of the frescoes shows a maritime expedition that Hatshepsut claimed to have sent to a country called Punt, the location of which is now much discussed but was clearly to the south of Egypt.  From Punt various luxurious and exotic items were brought back to Egypt, all shown in the frescoes.

The show begins by introducing the problem that archaeologist, and ancient shipping expert, Cheryl Ward set out to resolve:  whether or not the maritime journey to Punt was actually feasible in the ships shown in the frescoes.  Opinion on the subject has always been divided, partly because the ships do not look particularly sea-worthy and partly because other statements on the temple are clearly designed to demonstrate the validity of Hatshepsut’s claim to the throne rather than representing historical reality.

The greater part of the documentary was taken up with a reconstruction of one of the boats in real life, a 12 month exercise followed by the launch and then sailing of the boat in the Red Sea, heading first to the south towards Ethiopia and then the southeast towards Yemen.  The overall focus of the The Pharaoh Who Conquered the Sea is about this piece of experimental archaeology, very much in the tradition of the experiments in the mid 1900s that saw Thor Heyerdahl launch the raft Kontiki and the ships Ra I and II to prove points about the capabilities of ancient mariners.  It was aimed squarely at an audience more interested in drama than archaeology, and for me it suffered somewhat as a result.

The first part of the show was the most archaeologically interesting.  Archaeologist Kathryn Bard and presenter Cheryl Ward were filmed uncovering maritime remains from Mersa Gawasis, described as a “bivouac” on a former bay on the edge of the Red Sea.  There was a real moment of excitement as Bard revealed a box with an inscription reading “the wonderful things of Punt,” original boat wooden parts were discovered, and Cheryl Ward revealed dozens of coiled ropes left behind by New Kingdom seafarers.

From there on in, it was very much about the people involved in the project, alternating with dramatized reconstructions of Hatshepsut in her palace, which were used to enable the narrator to explain some of the background history. There was also a lot of footage of Cheryl Ward and ancient boat builder Tom Vosmer travelling around gazing at various objects, giving television-worthy sound-bites.

Various forms of data were taken into account during the computer modelling of the ship that was used to form the template from which the replica would be built.  As well as the Deir el Bahri reliefs (examined in darkness with torches, unexplained but presumably to see the images in sharper relief), model boats were considered, a boat from Dashur at the Cairo Museum was examined, and the keel of the Khufu boat at Giza was given particular attention. The Mersa Gawasis rudder and planks were very important indicators of how the ships may have been constructed.

The scenes of the replica ship being built by a Rashid shipwright family in the Delta were fascinating, and the difficulties they encountered building a boat without either a skeleton Framework or metal nails were made obvious.  The way in which the rigging would have been fixed and arranged was resolved by reference to modern boats in northern Egypt that apparently use comparable systems.

It took nearly a year to build the boat.  There is no evidence from Egypt of caulking to block gaps in Egypt, so the working hypothesis was the expansion of the carefully shaped and curved planks would expand to fill gaps, making her watertight.  The plan was to launch her and let her take on water for two weeks.  The launch of the boat from the covered yard into the water was a lovely moment, with the boat builders clearly thrilled by the achievement.  Named Min, for an ancient Egyptian deity, she looked beautiful.  Two weeks later the boat was pumped out but immediately began to take on water.  After some discussion blocking materials used by modern and ancient ship builders, potentially available to the ancient Egyptians, were used to solve the problem.  These steps made the boat water-fast and she was launched, with her crew, on the maiden voyage.

The rest of the show was taken up with Min being put through her paces, standing up to wind, high waves and enduring the pressures of tacking towards Yemen.  She was able to deal with everything thrown at her, which means that the expedition to Punt was a technical possibility.

If you are interested in light television viewing this was a perfectly good way to spend an hour, but if you don’t have much truck with dramatized reconstructions and lots of footage of the participants travelling around and acting out staged discussions, you may find it a bit frustrating. 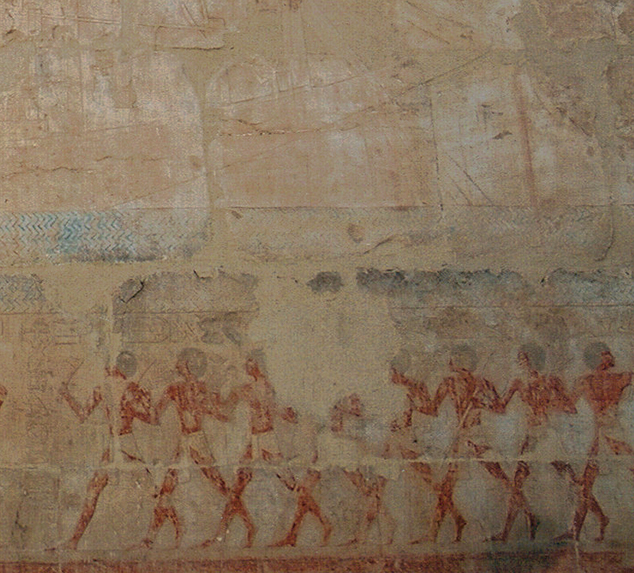 The background history, diluted in dramatic reconstructions, is actually fascinating and a lot more time could have been spent discussing this intelligently, showing views of contemporary material, rather than actors and stage sets.  There was very little contemporary archaeology shown – there were very few shots of statues of Hatshepsut, other reliefs at Deir el Bahri, her monumental buildings, or her tomb, for example.

Overall, the producers focused on the sense of adventure and the wow-factor of the boat herself, minimizing the archaeological content in favour of creating a popular piece that would appeal to a wide audience.