By Andrea Byrnes. Published on In Brief, Egyptological, 7th June 2012. 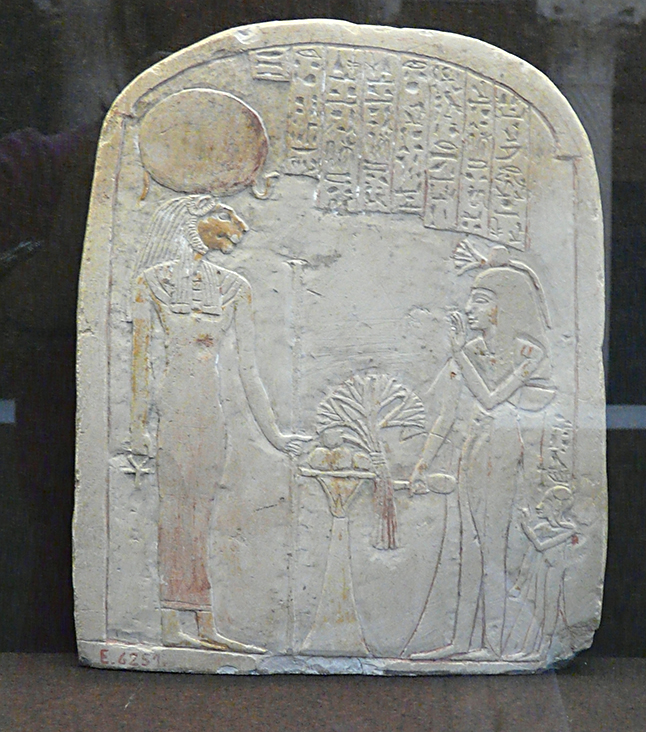 All Ancient Egyptian lion deities share the same basic attributes.  Capable of great rage and great kindness, some are associated very closely with the Eye of Ra and all were considered to be important guardians of the dead, fierce and nurturing protectors.

Of all the leonine deities the most elusive is Henut-Mestjet, or Mestjet.  There is only one known depiction of her, on a stela from the north Abydos necropolis and now in the Musées Royaux d’Art et d’Histoire in Brussels (Belgium), accession number E.6251.   It dates to the 21st Dynasty (Third Intermediate Period).

The stela is simple and is by no means one of the finest to come from Abydos, but it has a certain charm to it.  The carving of the figures seems finer than that of the hieroglyphs, and the figure of Henut-Mestjet herself, with her finely drawn face and detail of the mane surrounding her face, is very attractive.  It was clearly beautifully coloured, with rich shades used to depict skin and clothing.

It is typical of many Abydos necropolis stelae, made on pale limestone with a rounded top, with some of the original yellow and red paintwork picking out features and details.  The hieroglyphs are roughly carved and quite difficult to make out, but the scene, shown in relief, is very easy to read.  A leonine deity stands tall on the left.  A smaller human figure faces her on the other side of an offering table, and behind her a small figure of a child stands in a similar stance.  It is a standard representation of an offering scene, with the deceased offering to a favoured deity, her child behind her.

The deity in question, Henut-Mestjet, is depicted with a red-painted solar disk on her head encircled by a uraeus, a cobra that sits over her forehead.  Her face, arms and legs are picked out in dark yellow.  She wears a long shift dress, with traces of red still visible, and has a collar beneath her wig or mane.  In her right hand she holds an ankh, the symbol of life.  In her left hand she holds a staff, its head in the shape of a papyrus.  Her expression is benign.

The tiny lotus-shaped offering table, with three round objects on its surface, all bearing traces of yellow paint, is topped with a bunch of three lotus flowers in full bloom, their stems picked out in red.

Facing Henut-Mestjet is the owner of the stela, the deceased, whose name is not known.  Her left hand is held up in greeting and respect.  In her right hand she holds an unidentified object.  On her head she wears an unguent cone with a lotus flower across it.  Her dress is so diaphanous that it is indicated only by an outline, which retains faint traces of red paint.  Her daughter, similarly garbed, has her hair dressed in a long side lock that sits over her left shoulder, and holds up her left hand in imitation of her mother’s gesture.  Her name is Isetanefret. 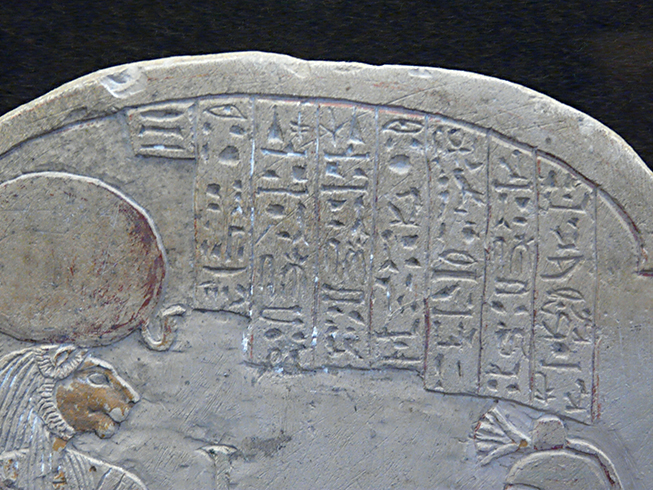 Detail of the Mestjet stela. Photograph by Andrea Byrnes

The text above this little scene is difficult to make out in the photograph but has been clearly illustrated in Steven Quirke’s The Cult of Ra (with a less detailed illustration of the same in Richard Wilkinson’s The Complete Gods and Goddesses of Ancient Egypt).  It shows two offering texts, each working out from near the middle reading, in abbreviated form, the standard htp di nswt formula used to negotiate afterlife provisions with the deity of choice (hover your cursor over the hieroglyphs to enlarge them). The deity’s name can be made out immediately under this formula and could mean Mistress of Mestjet or the Lady Mestjet.  The translation of the name Mestjet is in some doubt, and may be a place-name either in this world or the next.   The only epithet on the stela is clearly shown is “eye of Ra,” an epithet bestowed upon many leonine deities, and one that indicates their role as an extension of Ra’s will.  The uraeus, representing the cobra deity Wadjet may reinforce that message, as she too was often identified as the Eye of Ra.

In conclusion, it seems that Henut Mestjet, or Mestjet, was a deity identified with the Eye of Ra and was probably local to a particular area, either Abydos or elsewhere.  A lovely and unique piece.

Quirke, S. 2001. The Cult of Ra. Sun-Worship in Ancient Egypt. Thames and Hudson

Wilkinson, R.H. 2003, The Complete Gods and Goddesses of Ancient Egypt. Thames and Hudson