By Barbara O’Neill.  Published on Egyptological, In Brief, August 14th 2012

Introduction: An Overview of the Mortuary Temple

In the Old and Middle Kingdoms, pyramid complexes incorporated a mortuary chapel where cult to sustain the deceased king could be maintained.  By the Eighteenth Dynasty however, the royal-mortuary temple had evolved from an integrated part of the burial complex adopting a more fragmented form within discrete structures at western Thebes. The mortuary temple’s layout was closely based upon that of contemporary divine-cult temples.  Typically, a royal mortuary temple included the following elements:

Temple organisation evolved and changed through time, with cults for the living or deceased kings not restricted to mortuary temples, (Gundlach, 2009; Arnold, 1997).

The Mortuary Complex at Abydos

Re-excavation work, carried out by Dr. Stephen Harvey between 1993-2006 at the mortuary complex of Nebpehtyre Ahmose (King Ahmose I) at Abydos, has provided renewed insight into the conceptual variability of intended functions within divine and mortuary cults, following the reunification of Egypt at the beginning of the New Kingdom (Harvey, 1998).  With no evidence of a mortuary temple for this monarch at Thebes, the vast mortuary complex constructed by Ahmose at South Abydos, includes subsidiary structures for his sister-wife Ahmose-Nefertari and their grandmother Tetesheri, with other cult-components possibly related to Crown Prince Ahmose, an eldest son, who is believed to have predeceased his father.

Construction of his mortuary complex is believed to have begun late in Ahmose’s reign between Regnal Years 18-22 following his defeat of the Hyksos, an event recorded on the outer walls of his pyramid temple at Abydos and attested through thousands of carved relief and painted fragments.  Triumphant battle-scenes depicting horses and chariots, perhaps the earliest examples of this genre, provide ‘unique historical data’ which may prompt a revision of our understanding of the chronology of narrative art in Egypt (Harvey, 1998-p.150; O’Connor, 2009, p108). Other innovative elements include stamped bricks, the first ever attested in a royal-mortuary complex. The bricks indicate a revised titulary for Ahmose as Sa-rA-HqAtAwy, and HqAtAwy-mry-Wsir uniting this king with the mortuary-cults of both Re and Osiris.

Although most of Ahmose’s funerary structure at Abydos no longer exists in an immediately recognisable form, Dr. Stephen Harvey’s painstaking work has revealed evidence of the massive structure which once stood there. Constructed along a central north-south axis at South Abydos, the complex included a large mortuary temple at the edge of the arid area close to the limit of cultivation, with the subsidiary temple of Ahmose-Nefertari nearby. There is evidence of tree-pits either side of the main temple’s northern entrance which was approached through a massive mud-brick pylon gateway which itself stood before open courts. Within the temple, the pillars of colonnaded halls bore scenes depicting Ahmose in the embrace of several deities.  Other carved and painted imagery (now fragmented)  attests to an evident preoccupation with offering table scenes within which Ahmose-Nefertari stands behind the king, who is seated before elaborate offerings,  served by iwnmwtf priests. In this imagery, the king is clearly the object of cultic devotion (Harvey, 1998).

At the beginning of the Eighteenth Dynasty significant changes occurred in divine cult and royal mortuary temple ideology. Interpreting the repertoire of scenes and the use of cultic space within Ahmose’s temple is important In understanding these changes. Enactment of ritual evolved from that carried out on behalf of the deceased king, to cultic practices carried out by the king on behalf of the gods. Depictions within the South Abydos temple complex and at his Northern shrine portray Ahmose as the object of cult signifying his divine nature and suggesting ‘a compelling personal need’ for deification and immortality (Harvey, 1998, pp.419-421; O’Connor, 2009-p.109).

The pyramid temple of Ahmose is believed to have been the last monument of that type to have been built in the Nile Valley by an Egyptian king. The decision to built a pyramid temple was most likely intended to evoke the successful political and economic reigns of earlier Middle Kingdom unifier kings.  Ahmose employed the monumental symbolism of pyramid and terrace temple forms succinctly integrating Memphite, Theban and Abydene funerary ideologies into the design, layout and structure of his mortuary temple.  It was clearly important to Ahmose that in his most significant temple structure all important aspects of Egypt’s funerary traditions were reflected in this mortuary complex.  Today Ahmose I is recognised as the founder of the 18th Dynasty.  Living in turbulent times, it is likely that he believed adherence to traditions as either propitious or politically expedient to his ambition to reunite Upper and Lower Egypt. 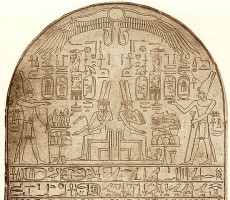 The southern-axial placement of a nearby enclosure dedicated to Ahmose’s wife, Ahmose-Nefertari,  appears to indicate her cultic role as an incarnation of Hathor, signifying the prominent role of his sister-wife during Ahmose’s reign.  Further on from the pyramid complex is a shrine dedicated to Tetesheri placed close to her unfinished cenotaph-tomb. This part of the complex culminates in a terraced temple built into the cliffs which surround the area.

The elevated terrace temple may represent the rwd-nTr-aA, the staircase of Osiris, with the related tomb symbolising the Osirian cave and the sacred grove which surrounded it.  The pyramid and its subsidiary structures appear to represent the Axt, the solar horizon, conceptualising Dt-Osirian time of permanent perfection and cyclic nHH-time, related to solar renewal. Although Osirian ideology was an overarching factor in Ahmose’s funerary programme, solar aspects are also evident in the east-west axis of the complex, referencing Memphite-style solar iconography through the pyramid which dominated the eastern end of the monumental axis; its form representing the primeval mound of creation.

Ahmose has two physically separate cult locales at Abydos.  At North Abydos, within the Osiris temple complex, Amenhotep I also built a cult chapel for his father where Ahmose’s Osirian transformation appears paramount. There is evidence that both locales were connected through ritual procession (Harvey, 2011).  This conclusion is supported by depictions of the Ahmose barque within the temples of Ramesses II and Seti I nearby.

The mortuary complex of Nebpehtyre Ahmose has ‘paradigmatic and extra-regional significance’ in the development of royal cult from the start of the Eighteenth Dynasty, (O’Connor, 2009, p.107). This is also evident in the newly emergent cult of the royal-ka, as exemplified within the Theban temples of Amun-Ra at Karnak and Luxor, and within the Southern and Northern mortuary structures of Ahmose at Abydos. Modifications created by Ahmose within post-Hyksos Egyptian royal funerary ideology is said to have profoundly affected the rest of the Eighteenth dynasty (Bryan, 2000).

It was once noted that the reign of Ahmose lacked the time and resources for significant construction, with his finest ‘monument’, the Eighteenth Dynasty itself, (Lefebvre, 1929 in Harvey, 2007).  However, it might be argued that the unique legacy emerging from ongoing investigations into this king’s intriguing mortuary complex at Abydos, indicates significant architectural and theological innovations which may have influenced royal and divine-cult ideologies from the dawn of the New Kingdom.