By Barbara O’Neill. Published on Egyptological, In Brief. 18th April 2013

(NB: Although this was originally published as part of Edition 8, it was subsequently lost due to technical difficulties.  It was re-added in November 2013). 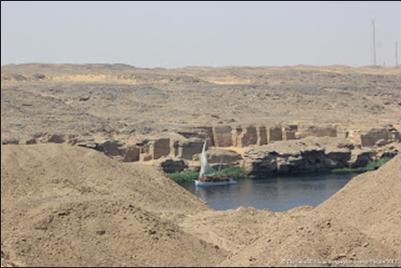 I discovered Gebel el Silsila by accident one could say.  Back in 2007, when still a doctoral student, I visited Egypt to study relief scenes depicting Queen Arsinoë II.

At the time the convoy system was still in use for those who wished to travel by car.  Visitors were permitted just an hour in each temple before being rushed off to the next. So John (Dr. John Ward) and I travelled from Aswan to Edfu in a felucca instead, which allowed us the time we required in each temple.

As we sailed up the Nile our captain informed us that a Pharaonic site was coming up and asked us if we wished to stop there to have a look. My first thought was that stopping there would mean a delay in an already tight schedule.  But then again who was I to say “no” to a site embedded in the most gorgeous setting with cenotaphs and stelae casting their reflections on the Nile? Of course we agreed to go ashore!

It wasn’t the splendour of the Speos of Horemheb, the beautifully coloured and playful ceiling patterns in the cenotaphs, or the impressive commemorations carved on the stelae that grabbed our attention. Instead we found ourselves overwhelmed by a series of symbols, or quarry marks as we now know them; their complexity in form and size; the seemingly randomly placement; not to forget mentioning the vast quantity of the marks. It was then, that first day following a spontaneous visit to Silsila, that we both knew that we wanted to return and study this site with its intriguing quarry marks in more detail.

On the relationship between the act of quarrying and Egyptian religion in the New Kingdom:

Although there are pictographs at Gebel el Silsila dating back to the Prehistoric era, Silsila saw an increase in its importance during the early 18th Dynasty, particularly during the reign of Queen Hatshepsut. One of the more important facts to emphasise is that the sandstone blocks at Silsila were extracted for the construction of temples and sanctuaries, so the stone itself was therefore considered sacred from the very beginning. It is no secret that the ancient Egyptians looked at Silsila as a sacred place, preserved in various inscriptions dedicated to the Nile and to the creation gods. At Silsila East, Amenhotep III and his son both showed their gratitude in the form of stelae and shrines directly related to the areas they quarried stone from. A brief unpublished hieroglyphic inscription here provides the name of Ptah, confirming the information given in Amenhotep’s stela that stone was extracted from Silsila in order to build a temple to this deity.

Later, and following in his father’s footsteps, Ramesses II erected a commemoration stela between and in direct alignment with “his” quarry and the quay from where the stone was transported to the Ramesseum.

The correlation between quarrying and religion becomes even more complex when one turns one’s attention to the later phase of Egyptian antiquity: hundreds of textual and pictorial graffiti belonging to the Ptolemaic and Roman periods paint a picture of how these later visitors to Silsila felt almost obliged to express their gratefulness, adoration and ask the gods for protection. This is the topic we focus on currently in the Gebel el Silsila Epigraphic Survey Project (link here to website?) 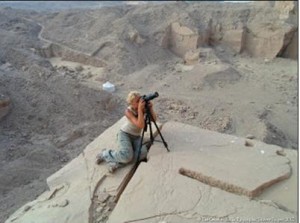 The aim is to epigraphically survey the complete site of Gebel el Silsila to create a comprehensive corpus of all displayed graffiti, textual and pictorial, ranging from prehistoric rock art to the last phase of Egyptian antiquity. Combined with a topographic survey we hope to get a better understanding of how the site functioned during its various historical phases.

For me personally (working with Dr. John Ward) my responsibility is to create a comprehensive database of the site’s quarry marks, and to study them in detail and seek answers to their function and meaning. In contrast to most other marking systems (also known as pseudo script) that often denote ownership or identity, these quarry marks indicate a more symbolic function with representations associated with specific deities.

As project director I also see the absolute need for an update of published material from Silsila, especially the graffiti. To this day only one monograph exists with reference to ancient graffiti in Silsila.  This book, published in 1915, was written by the famous linguists W. Spiegelberg and F. Preisigke, but none of them ever visited Silsila. Instead they based their work on notes and drawings made by G. Legrain, who visited Silsila in 1896.  Working at Silsila we can follow Legrain’s epigraphic documentation written in chalk on the quarry faces. For us it is evident that he meant to return to this site in order to continue his work, but the finding of the cachette at Karnak turned his focus elsewhere.

When Silsila later fell under the responsibility of the EES, led by the late R. Caminos, the epigraphic emphasis was naturally on the Pharaonic monumental remains, including the cenotaphs, stelae and the speos. Caminos also intended to present later graffiti, but he states in his first volume that he had no intention of reinvestigating Silsila East’s later graffiti since it was already published by Spiegelberg and Preisigke. So, for us it is not only an honour to pick up where Legrain and Caminos stopped, but we also feel that we have a responsibility of giving the site itself credit for this rich source of ancient material.

On pseudo script and quarry marks: 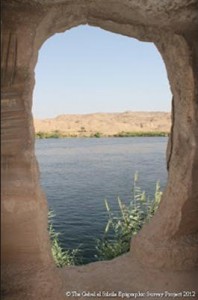 Pseudo script is a relatively new research topic within Egyptology and ancient history, but its importance has been emphasised in a series of international and interdisciplinary conferences arranged between the universities of Humbult, Warsaw and Leiden since 2006. The term refers to all graphic signs, non-textual symbols that express a meaning or function, but which cannot be classified as traditional writing. As such, pseudo script includes graphic signs on seals, ceramic vessels, ostraca, temple and tomb graffiti, and of course quarry marks.

Since 2007 John and I have travelled all over Egypt to document quarry marks preserved in situ (in the quarries) and on extracted stone blocks within temple architecture. Quarry marks appear in abundance throughout Egypt, from Taposiris Magna in the north to Dakka in south. However, other than a few mentions or references in the form of appendices, no systematic study has been presented thus far, which may have resulted in a misconception of their meaning and function.

The quarry marks at Silsila (and elsewhere) have been sculptured in relief with a single or sometimes double outline, carefully carved with a metal chisel. We find them as singulars or in linear series in all four directions (N, S, E, W), and at all heights of the quarry faces. Size varies greatly, from 10 cm up to 1.5 m in height. Their character is identical or similar, but far from limited to hieroglyphs, Greek and Carian alphabetic letters, concrete pictograms such as architectural components, weapons, flowers, cosmic representations, animals, abstract geometrical patterns, and a few which we so far have not identified. This combination of graphic signs is referred to as ‘pseudo script’ regardless of actual function or meaning.

As far as their meaning is concerned, the short answer is that the material indicates a symbolic (religious) function. I can elaborate more in an article for Egyptological later on.

On the syncretism between Egyptian, Greek and Roman scripts in the Silsila quarry mark genre:

As far as preliminary analysis shows, a vast majority of the quarry marks in Silsila belong to the Ptolemaic and Roman periods. In our dating process we consider the size and depth of the chisel mark, tool marks left on the quarry face from the extraction process, direct contextual material such as inscriptions, indirect contextual material such as pottery, and of course, the character and style of the depicted image in the quarry mark. However, we have recorded examples dating to Seti I and Ramses II, but if we expand to geographically encircle all of Egypt, then we include examples not only from New Kingdom, but also from Middle Kingdom and the Late Period.

There is a long tradition of pseudo script, including quarry marks, in Egypt if considering a purely practical function. For such a function we know of quarry marks that were used to indicate ownership, destination, amount, etc. However, these marks, known as transportation marks, (architectural) positioning marks, control notes, etc. are technically and stylistically different from the quarry marks at Silsila.

The syncretistic element we have noted at Silsila is based on the character of the quarry marks, where the depicted object can be identified or compared with Egyptian hieroglyphs or iconographic representations from the traditional Egyptian art, with Greek alphabetic letters, and with Roman symbolic images represented in literature and art. For that reason, the quarry marks at Silsila are not traditional Egyptian, neither Greek nor Roman, but clearly a “syncretistic child” of the last period of Egyptian antiquity.

On a particular fascination with any one form of sign: 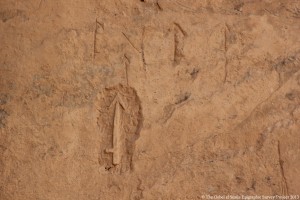 Oh, this is a difficult question to answer since there are so many. Some examples are made with such a great care and detail that they deserve respect for just being beautiful to look at, but from a symbolic perspective I believe that I have to choose the harpoon. This quarry mark is depicted in a limited part of the main quarry at Silsila East, in some cases appearing with over one hundred examples on one single quarry face. Symbolically, the harpoon relates to Horus of Edfu and his Silsila manifestation Pachimesen, meaning “he of the uplifting of the harpoon”. Other than a singular quarry mark, I have to say that I am deeply fascinated with the quarry marks that are placed in linear series, containing up to seventeen individual marks and remind one of a textual (glyphic) inscription.

You can follow Dr. Maria Nilsson and Dr. John Ward’s ongoing mission at Gebel el Silsila here:
http://gebelelsilsilaepigraphicsurveyproject.blogspot.com/
and for more information on the history of Gebel el Silsila: http://escholarship.org/uc/item/2x73c8bz