By Andrea Byrnes. Published on Egyptological, In Brief. 8th November 2013 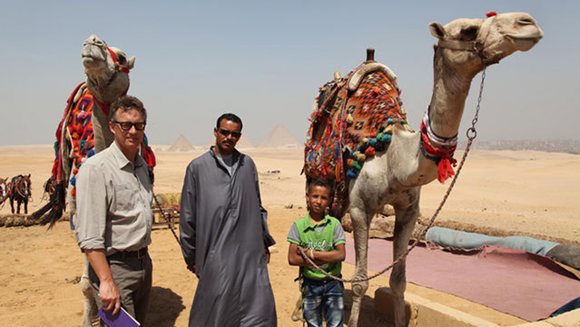 This evening on English television Channel 4 aired “Egypt’s Tomb Raiders” in their Unreported World series. The programme focuses on the plundering of Egypt’s heritage since the Egyptian revolution and the rule of Egypt under Mohammed Morsi.  Although reporter Aidan Hartley is given top billing, and Channel 4 deserves credit for pulling together this 25 minute exposé, it is archaeologist Monica Hanna who shines.  Long before Hanna was Hartley’s guide, she worked tirelessly to bring Egypt’s endangered heritage to the world’s attention. Over the last two years she has been interviewed by global media and has used social media to bring public awareness to a tragic problem, distributing knowledge that might otherwise have remained unreported.

The following summarizes the report, which focusses on two problems:  the destruction of unexcavated sites and the problems caused to families who rely on tourism to support themselves.

Egypt’s economy has always been very dependent on tourism but since the Egyptian revolution tourism has suffered and since the inauguration of Mohammed Morsi it has collapsed. Aidan Hartley, the reporter in this programme, meets Monica Hanna, who drives him out to Giza to show him some of the damage in close proximity to Cairo. Hanna is an archaeologist who has been putting her life at risk in order to save the world’s greatest treasures.  Hanna is a remarkable woman.  She has not stopped at being the global voice in the defence of Egypt’s heritage but is preparing to sue the Egyptian government over its neglect of Egypt’s sites and in this film, on the advice of her legal team, was in the process of collecting all the hard evidence that they required before they could proceed.  There was plenty of evidence, and every day new phone calls were bringing in new information.

Even at Giza, law and order has been completely absent beyond the immediate vicinity of the pyramids and the Sphinx.  Less than a kilometre away, under the sand, unexplored tombs and temples are now vulnerable to plundering.  Whether it is because security resources have been diverted to cities to put down protests, or because the government have felt no motivation to protect Pharaonic and later heritage, Egypt’s security forces have left her treasures vulnerable.  The cameras showed vast holes sunk in the desert behind the pyramids, which were located by looters using high-tech sonar and excavated with heavy machinery to find odds and ends of jewellery and small objects like shabits.  These newly excavated shafts were all very fresh, and beyond those picked out by the cameras, the entire desert landscape as far as the eye could see was pock-marked with fresh holes dug in last few weeks.  The damage to the archaeological record is mind-numbing.  The chaos inflicted on unexcavated sites can scarcely be imagined.

The report shifted next to the pyramids at Darshur where, in more peaceful times, Monica Hanna had been excavating.  Every day there is new discovery of looting around the site.  There are holes everywhere – deep shafts surrounded by vehicle tracks and footprints in previously unexcavated areas.  Because these areas are completely virgin there is no record of what has been lost.  The film crew spotted a group of men digging, but Monica has been shot at in the past so they had to leave in a hurry.

On the very next day Monica received a call about the destruction of Coptic rock-cut sites to the south of Cairo, so the film crew headed out.  When they arrived at the astonishing site they found that dynamite was being used to gain entrance to sites to find treasures.  One example was a Coptic church carved into the rock, which had suffered extensive dynamite damage, with tunnels excavated through it.  Early Christian frescoes had been defaced along with undocumented inscriptions.  Outside, Christian graves had been looted and bodies dismantled and destroyed, the skeletal remains scattered on the desert floor.  Surveying the destruction with dismay all over her face, Monica Hanna said that  2000 years after their burial this desecration, to find small objects of value, was “shameful.”

Because of the current night curfew, sites in the desert areas just beyond cities and agricultural land are completely unprotected.  Whilst into power, the Muslim Brotherhood neglected the ancient sites, in spite of their importance to tourism.  Monica Hanna believes that this is because they are non-Islamic, and that the government saw them as a threat because in Islamic terms ancient Egypt was a “bad” civilization.  In spite of all her efforts to put pressure on the government to protect all these sites she feels that she may be fighting a losing battle.  The reporter, Aidan Hartley, interviewed one of the looters who says that he has to do it to support family.  He and his associates offer bribes to officials to let him dig.  He agrees that it is sad that future generations will suffer from the lack of tourist industry but his view is that in the short term he needs to live, so to his thinking the looting is justifiable.

At the same time, those who earned an honest income from the tourist industry are suffering.  Before the revolution Egypt’s annual income was 6 billion pounds and 10,000 visitors used to arrive at Giza.  In Giza village Emmad Abuzuba and his young assistant Hima offer camel rides in the pyramid area, but now that the tourists are staying away things are getting hard.  Hima gave up work to support his father who has a degenerative disease that means he cannot walk.  He loves camels and hoped that the camel job at the pyramids would be the answer, but without tourists there is no income.  Even the camels are suffering because there’s not enough food to go around. Many of the workers blame the Muslim Brotherhood and say that they are scaring tourism away. Those interviewed think that a return to military rule is the answer.  Autumn is usually start of high season and the camel ride sellers were hoping for tourism at Giza but on the day that the crew were filming a car bomb exploded in Cairo and everything  was shut, and no tourists arrived.  The camels, clearly much loved, were suffering and one had a foot infection.  It was taken to a centre where free treatment for horses and camels, but other animals were not as fortunate.   The film showed truly awful photos of starving ponies and camels and, even worse, dozens of carcasses of starved horses abandoned on the outskirts of habitation – absolutely  appalling.  As the report emphasised, this is not mere neglect – the income from one horse could have supported one family for a week.   Such families are struggling to find the school fees are required to educate their children.  In these big families there is not enough money to go around.  Towards the end of the report, Hisham Zaazou, the Tourist Minister, was shown trying to reassure reporters about the future of tourism, but when interviewed by Hartley agreed that looting is a problem and said that Egypt would “heighten” security.  But hadn’t happened by the end of the research into the programme.

At the end of the programme, Monica Hanna was filmed showing her photos to lawyer Mohammed Fadil.  He agreed that the Minister of Antiquities could be sued on the strength of her evidence.  She has received threats against her life but she continues anyway.  She worries not just about the heritage of Egypt but the future of families.  As she says, looters are shooting themselves in the foot because all of this sort of bad news alienates tourists.  She says that the looters are “stealing from the future food-plate of their children.”

A disturbing and well-presented film.  Repeated thanks are due to Monica Hanna for her truly heroic work.