By Andrea Byrnes and Dylan Bickerstaffe. Published on In Brief, 14th November 2013.

Egypt: Series 1 – 1. The Search for Tutankhamun

Part 1 of a six-part series by the BBC 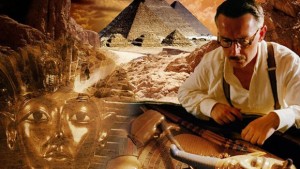 Egypt – The Search for Tutankhamun

Described as a docu-drama, the first in the BBC series Egypt looks at the search for and discovery of the tomb of Tutankhamun.

I’ve commented on the format and Dylan has done an excellent job of picking various points that were glossed over in the show.

The show shifts from the dramatized recreation of Carter’s time to narrated scenes of Tutankhamun’s time.  It never really works when there’s a narration explaining and elaborating the dramatization.  It always seems as though the programme makers are unable to decide whether they want a serious documentary or an entertaining but informative period piece, and in trying to compromise manage to achieve neither.  This format is rarely convincing, and this one is no exception.

Although I find dramatized documentaries very difficult to get on with, it was reasonably well done. Some of the actors chosen are well established names, like Julian Wadham and Nickolas Grace.  Laurence Fox as Leonard was good but it is slightly odd that he was named Leonard in this episode when Davis’s excavator was Edward Ayrton.  Stuart Graham was suitably uptight as Carter, albeit a trifle stilted, and although some of the original participants were terribly over-played (Theodore Davis, for example) most were perfectly competent.  I particularly liked the ever-reliable Caroline Langrishe as Lady Carnarvon saying of Carter, in suitably acidic tones: “He certainly leaves no stone unturned.”

The dramatized part of the show starts with a scene showing Howard Carter, employed as an artist, recording temple art after major rainfall.  It follows him through his various hopes and disappointments until he meets Lord Carnarvon.  The meeting of Carnarvon and Howard, a meeting that caused some discomfort for Leonard, happened at a time when Carnarvon was looking for a new project with a different field director.  He felt that Carter, something of an outcast, fitted the bill.  Although Carnarvon funded Carter’s investigations outside the Valley of the Kings until Theodore Davis gave up his concession, and within the Valley afterwards, various disappointments followed, leaching Carnarvon of funds.  With his funds running out, Carter’s statement that he could not fund another season gives the show a bit of a cliff-hanger, and of course there’s a happy ending.  Carter’s confidence and willingness to fund another season himself secured Carnarvon’s funding for one final season.  Tutankhamun’s undisturbed tomb is found in the November of 1922 and the timeless “wonderful things” line is uttered.  The subsequent battering of a way through the entrance with a sledgehammer slightly diminishes the romance of the moment, but it is what happened.  There’s a bit of a moment of moral angst where they decide whether or not to break the rules and break the seals of the shrines, but Carter gives way to Carnarvon and they open it up – to find another set inside, perfectly sealed, with the promise of the Pharaoh’s mummy within.

There are various aspects of the story missing or glossed over.  One of the first scenes is Carter’s finding of some stone pieces suggesting a tomb after his horse stumbles following rain storm in 1899.  It looks as though this is building up to the discovery of the tomb of Tutankhamun but this actually happened at Bab el Hosan (near Deir el Bahri), not the Valley of the Kings.  The tomb was eventually opened by Carter in 1901, without any involvement by Davis, but it was barren.  Carter only found a statue and empty coffin.  The scenes leading up to  Carnarvon Carnarvon hiring Carter  imply that Carnarvon had no previous connection with excavations in Egypt until he began to fund Carter, but that is inaccurate.  Carter was funded by Carnarvon from 1908 but Carnarvon had already been funding various excavations from 1905.  When the two met, Carter had suffered disgrace as the result of his activities in the north of Egypt at Saqqara, and Carnarvon was looking for a new project with a different field director when he met Carter.  Next, there’s a scene between Leonard and Carter where the former explains the significance of the embalming cache, but whatever conversations the two may have had, it is thought that Carter was perfectly aware of its significance before digging for Tutankhamun.  The scene of Carter smashing his way through the door shows him being indiscriminate in his actions, but he was actually quite careful to start his hole in the resealed area at the top to preserve seal stamps on the rest of the wall. The show focuses on a moment where the two men debate whether or not they should break the rules and open the shrines, but by then they had already broken the terms of the concession by entering at all, so all other incursions were effectively moot.

The narrative is the lesser part of the story, so there wasn’t that much to comment on.  I found it irritating that the narrated scenes of ancient Egypt are displayed in desaturated colour, presumably to give them a sense of antiquity.  The washed-out colour is an unnecessary device.  On the factual front, Tutankahmun is presented, without any discussion, as the son of Akhenaten, and therefore brother to Ankhesenamun, but there are many experts who don’t accept this view.  On the upside, Andrew Sachs, the narrator of so many excellent historical pieces (including audio versions of Tom Holland’s books) is absolutely excellent.

Although it certainly glosses over the story and leaves out certain details to maintain the flow of the dramatic reconstruction, the central benefit of the show is that it does outline the main sequence of events up to the discovery of the tomb for anyone who doesn’t know the story, explaining the various false starts, the different players involved and the often difficult relationships between the different participants. There’s also some brief but very nice footage of some of the Egyptian temples, which is always good to see and Medinet Habu gets a nice vignette of its own.

In all, not a terrible example of the genre, but I am always in doubt of the value of this particular format, combining narrative and dramatization and not doing a particularly brilliant job of either.

At the end of Part 1 the show leaves Carter and Carnarvon inspecting the shrines in the burial chamber. Part 2 will be following on from the discovery of the tomb to look at how that discovery was handled.