By Andrea Byrnes. On Egyptological, In Brief.  4th December 2013 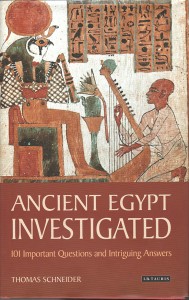 Professor Thomas Schneider is Professor of Egyptology and Near Eastern Studies at the University of British Columbia in the United States, Editor in Chief of the Journal of Egyptian History  and is currently researching the history of Egyptology in Nazi Germany.

At first glance, this book represents a curious approach to the organization of information and is distinctive when compared to other popular titles, due to its unusual premise – that ancient Egypt can be explored by asking questions rather than via chronological narrative or thematic chapters.    The questions that Schneider asks are intended, the fly-leaf explains, to assist in the author’s attempts to move away from the familiar ideas perpetuated by coffee table books, art exhibitions and spectacular discoveries, towards a more modern view of Egypt that dispels “myths and inaccuracies.”  The preface provides more information:  “Many of the questions gathered in this book are included because of the frequency with which they are asked, while others can provide surprising, unusual and perhaps even provocative insights into ancient Egypt.  Taken together, they aim to introduce readers to ancient Egypt and invite  them to further study this millennia-old and still intriguing culture” (p.xiii).

A sample of some of the questions in those sections are, completely at random:

To start with, although the title may seem to be directed at a young audience, this is not a book that will appeal to children.  It is aimed firmly at an adult audience. Each of the mini-articles extends over between one and two and a half pages.  All are very well researched and presented.  The writing is clear and authoritative, combining academic rigour with a style that is generally digestible.  Questions like “what is the importance of ancient Egypt for modern Egypt?” cannot be dealt with in two and a bit pages, but many of the discussions do pique the interest and invite the reader to investigate further elsewhere.  All of the questions are interesting, and many of them are, as Schneider intended, far less conventional than topics often handled by standard popular texts.  At no time does Schneider talk down to his readers.

A minor peculiarity of the book is that although each mini-chapter is framed as a question, that question frequently remains unanswered.  Question 10, for example, “Can Egypt solve modern problems?” describes certain processes that Schneider feels can be directly compared in past and present.  He suggests that the conflicts in Iraq and Afghanistan can be compared with the Ptolemaic civil war but never tackles what we can learn from the Ptolemaic war.   Similarly, the question “Could Egyptian history have followed a different course?” acknowledges that any history “can presumably take a different course” but doesn’t ever try to present the reader with an answer.  Instead, Schneider delves into the value of alternative histories with some good theoretical discussion.  Schneider focuses not on answering his questions, but on discussing the issues that they raise.

The role of discussion in Egyptology and some of those Egyptologists involved in key issues, is one of the recurring themes.  In Question 52, for example, “Why do we speak of the ‘hiddenness of myth’ in ancient Egypt?” Schneider suggests that myths are “outright unattested,” citing the case of the story of Osiris, Isis and Horus that is first attested in continuous form on the Ptolemaic temple of Edfu.  He looks at the nature and uses of myths and the reasons why it was in the interests of priests to keep them secret.  Again, there is no definitive answer to the question, which is a complex topic, but Schneider has provided a useful summary of a few of the issues that need to be discussed within this topic.

Some of Schneider’s discussions are less obvious than I expected.  For example, in answer to his question “Was ancient Egypt a culture of death?” I was expecting a discussion of funerary texts and tombs, but Schneider focuses instead on the quality of the data that permits Egyptologists to make such an assessment.  He concludes (p.62) that “[I]t is clear if we had balanced documentation, including millions of secular documents produced in capital cities, death and funerary monuments would no longer appears as the centre of cultural consciousness.”  He also airs the possibility, well worth highlighting, that during the Graeco-Roman period there may have been a crisis in confidence about the nature of the afterlife as it had been perceived by the Egyptians.  Again, Schneider looks less at providing answers than in raising issues that are important to debates about certain aspects of Egyptology.

As you would expect, some issues are simplified. Usually, this is because of the complexity of the issues raised.  More rarely, there are minor omissions. Question 47, for example, “Why was there no pig deity in Egypt” addresses that pigs were not always taboo, citing Predynastic examples, but although he quotes the Ptolemaic temple as an example of pigs hunted in the form of Seth, he does not mention that sow figurines of the later periods were used as amulets of good luck, particularly at New Year.  This is nit-picking, of course, but there may be other examples where simplification or small omissions may seem to distort the overall picture.

Once I had concluded that this was a book about issues, I was slightly disappointed that in his last two chapters his discussion of heritage management in Egypt was confined to a couple of lines at the end of the book.  Similarly, there is no real attempt to tackle the isolation of Egyptology from archaeological investigation in other regions, or the comparative lack of discussion in Egyptology about modern theoretical and methodological approaches.  Instead Schneider focuses his attention on the need for more research and excavation and emphasizes the important need to disseminate knowledge more efficiently to a wider public audience.

The images are all black and white and there are remarkably few of them – 16 over the 282 pages.  The book would have been much improved for good quality images, with at least some in colour.  There is a reference in Question 12 to the 4th Century BCE tomb of Petosiris in Dakhleh Osiris, which is used as an example of the blending of traditional Egyptian and Classical elements, a point that really needs illustrating with the images concerned so that the reader can see how the different motifs were combined in the same composition, but there is no image to illustrate it.

As to its supporting material, the book begins with a timeline, which is very useful, extending from prehistory to the Graeco-Roman period across a double spread. The map of Egypt, allocated a single page, is less useful because the place-name labels are so tiny.   The 101 questions are complemented with “101 Reading Suggestions for the Study of Ancient Egypt,” organized roughly by section heading, offering a reasonable starting point for further investigations.  There is a table of contents, but no index. 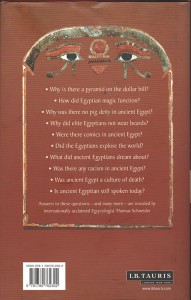 The target audience is by no means obvious.  It would not be useful to anyone who did not already have a framework of knowledge on which to hang the knowledge presented in these mini articles.  At the same time, someone with extensive knowledge might find this a bit superficial.  I am guessing that the intended audience lies somewhere in between, aiming at readers with a reasonable grounding of knowledge but with a lot more to learn about many of the current questions being asked in Egyptology.

The overall effect is difficult to assess. Ancient Egypt Investigated reads like a collection of excerpts or short stories, something to dip into rather than read from cover to cover.   To enjoy it you will need to be comfortable with the idea of navigating Egypt’s past via a series of stand-alone and only loosely connected pieces, each only between a page and two and a half pages long.   You will also need to be happy with the idea that the questions do not necessarily come with answers.  If the intention of the book is to encourage the reader to learn about issues in Egyptology, to investigate certain topics further, and to understand that Egypt is a medley of diverse themes and ideas, then it probably succeeds.  The book is stuffed full of information, and there were many items that were new to me and about which I wanted to know more.  It certainly provides a different approach to the topic of Egyptology, although whether favourable or not will be a matter of personal choice.  The lack of definitive answers may be frustrating, but also usefully serves to highlight how open-ended some of these matters actually remains, and how much research is yet to be carried out.

This is the last book that David Lorton translated before he died.  As a personal comment – thanks to David Lorton for his considerable efforts translating books that I would not have been able to read.