Review by Andrea Byrnes. Published in In Brief on Egyptological, 29th March 2014 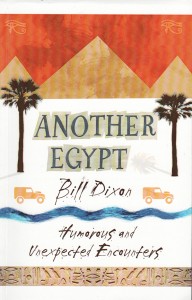 The front cover of Another Egypt by Bill Dixon

Another Egypt is essentially a travelogue.  I usually struggle slightly with travelogues and rarely read them, but I ordered Another Egypt on the recommendation of someone who had been particularly attracted by the evocative descriptions of the Eastern Desert.  I am a desert enthusiast, so any opportunity to read about the desert is always welcome.

Travelogues are challenging both to write and to read.  They are selective, they are written from a particular perspective and they are very personal.  This means that the writer of the travelogue comes under just as much scrutiny as the world about which he or she writes.  Whether you do or do not get on with a travel writer has a lot to do with how much empathy you feel for that person, their  interests and their humour.

The author’s exposure to Egypt began with a much-loved 1944 copy of 1001 Wonderful Things, given to him by his father.  Shortly before his 60th birthday he began to visit Egypt and his travels introduced him to Nile cruises, an Eastern Desert archaeological survey and tours into the Western Desert and its oases.  He does not say why he decided to write a book of reminiscences and anecdotes, but his overall goal is both a modest and an admirable one:  “If you smile or chuckle I shall consider my task complete.”

Bill Dixon’s book reads like a series of short excerpts from the larger travel journal of a convivial man who enjoys his travelling companions just as much as he does the surrounding landscape and archaeology.  The writing is articulate and fluent.  As all school children are taught, the opening lines of a piece of writing set the expectation for what follows.  After a foreword from Joann Fletcher and a Preface from the author, Bill Dixon’s book opens with the words:  “You hear them long before you see them.  In the stillness and silence of the desert all sounds demand attention.”  Those few words carried me back in time and place to the Eastern Desert, a world where there are so many stars that you can barely see the night sky, and where your thoughts and heartbeat seem louder than anything else around you.  His descriptions of the storks flying over the Eastern Desert and their fallen comrade at Gilf Kebir are elegant and charming, as is his passage about colours of the White Desert transmuting as the sun travels through the sky.  He brings the movement, subtlety and surprisingly boldness of rock art to life with a few well-chosen words.  Bill Dixon also went on Nile cruises, which led to much sitting around the swimming pool.  These Nile-side and pool-side anecdotes are all about the human behaviour that he observed.  Throughout the book, the stories that Dixon tells are usually less about Egypt itself than about himself as a traveller in Egypt observing other travellers and those who serve in Egypt’s tourist industry.  There is very little about Egypt’s heritage and culture.

From a distance of six years since my last desert visit I was slightly startled to be reminded of how consistent the desert travel experience always becomes.  Desert travel often consists of small numbers of people thrown into close proximity in frequently unhygienic conditions for days and often weeks at a time, often travelling over long distances with minimal distractions to keep them busy. However, as Bill Dixon so evocatively describes, the beautiful open space, endlessly shifting colours and amazing skies and scenery always attract an audience, and whilst such trips are always meticulously well  organized, there is always the illusion of adventure that many find alluring.  Amongst British desert travellers there is usually a ritualistic pattern of behaviour that begins as soon as the first campsite is established.  Dixon captures the conversations and rituals perfectly – concerns with the organization of suitable toilet facilities, the compulsory sharing of the airport alcohol of an evening, the passion for assigning pet names to everything from drivers to episodes (the “Jacuzzi” rock feature in the Eastern Desert, the “Dirty Diesel of Dakhleh,” the food-obsessed Ahmed who they renamed “Snackmed”), and the inevitable campsite dramas.   He also describes the dodgy plumbing in oasis hotels, vehicles breaking down 100s of kilometres from anywhere, and strange encounters with unexpected and very isolated people.  If you’ve never been on a desert tour before, it will certainly give you a very good idea of whether desert travel is likely to attract you, because Bill Dixon, who clearly enjoys being part of the unofficial desert club, paints a vivid picture.

The tone  of the book changes when the author is describing life on Nile cruises and around hotel swimming pools. As he scrutinizes and describes his fellow travellers, his tone seems to become much less warm and  indulgent.  Unlike desert trips, the role of the tourist on Nile cruises and in hotel spaces is usually far more passive, allowing the author the opportunity to watch rather than participate and he now inspects and describes the episodes unfolding before him, chronicling people’s appearances, actions, mannerisms and interactions.

Some of Bill Dixon’s experiences are novel, some very familiar, but all are unified by the author’s fascination with human idiosyncrasies.  To enjoy the book you will need to share that interest because his stories are usually centred on people and their unconscious performances.  Descriptions of women in particular seem to suggest that Bill Dixon has been very unlucky with his travelling companions:  the woman who stepped onto a Nile cruiser thinking that the Red Sea was rather narrow, the loquacious woman who was worried that she would be kidnapped for her gold fillings, the overdressed lady with the umbrella about whom everyone else on the cruise took such pleasure in speculating, the woman on the coach tour who thought that it was nice that mosques (actually Coptic churches) were being decorated with nice friendly crosses, the American woman who failed to understand the  finer subtleties of British humour and the group of women who made increasingly friendly overtures to the attractive young soldier accompanying the party.  If you enjoy the tone and style of these tales, you will probably savour the poolside tales of the women who don’t fit into their bikinis, the “Unveiling of the Flesh” ceremony (acquiring a sun tan), the heavily-tattooed overweight man with the bluish body who nearly caused a tidal wave in the pool, the over-plump domineering woman with the meek diminutive scholarly husband, the woman with the insect repellent, the single man whose sun tan mysteriously extended beyond the usual confines of his swimming trunks, the people visiting the pool-side lavatories and the various mating rituals of a number of pool-side occupants. 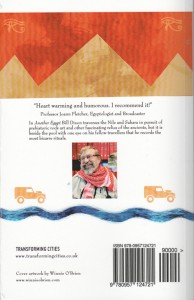 Another Egypt, back cover.

Sometimes he comes too close to the bone for me.  Although he is an enthusiastic contributor to the routines of desert tours, Bill Dixon is much less sympathetic as a spectator when he begins to describe how others choose to enjoy themselves in the more conventional sunshine resorts.  Some of the anecdotes made me feel very uncomfortable.  On one of the opening pages, entitled Apologies he states simply “If you happen to recognize yourself it was not you,” but many of his portraits must be instantly recognizable, if not to the person featured then at least to others who were there at the time.  I was particularly dismayed  by the unflattering portrait of the owner of a charming hotel in Bahariya, which echoed the author’s earlier concerns with an over-tactile guard at the Valley of the Golden Mummies.  I would rather that that story had been left untold, as the hotel owner, who provides a great facility for visitors to Bahariya, is named in the chapter that describes his hotel and his mannerisms in such detail.  For me some rather derisive portraits were a regrettable aspect of a book that aims to raise a smile but which has once or twice crossed a line to achieve it.  As I so often do with anecdotal travelogues, I found myself uneasy with my role as the passive recipient of  a couple of the stories that relied on satirizing others, however gently and humourously, in order to entertain.  Others will doubtless take a different view.

In conclusion, this is not a book about Egypt itself.  Instead it looks at the layer of tourism that lies across Egypt like a second skin.  As the book has no photographs or illustrations, it is wholly dependent on the author to paint verbal pictures and portraits, and Bill Dixon does this very well indeed.  I came away with the impression that whilst the author clearly loves deserts, wildlife and birds of the feathered variety, his main enjoyment of travel is that of the travel experience itself.  If you share Bill Dixon’s interests, humour and perspectives this would probably be an enjoyable souvenir.  If you are more interested in Egyptian heritage and culture than in the behaviour of tourists, this may not be your particular glass of mint tea.

The book is nicely assembled.  It has a very attractive cover, designed by Winnie O’Brien, and was published by Transforming Cities, who seem unexpected as publishers.  Specialists in urban planning, community design, and the management of  cultural and architectural resources, they have also started publishing both fiction and non-fiction as something of a side-line.  Quite how Bill Dixon came to their notice, or they to his, is not revealed.