Browsing: Home / 2014 / April / 25 / Confessions of a Part-time Lecturer to Newcomers in Egyptology: Cheops or Khufu?

Confessions of a Part-time Lecturer to Newcomers in Egyptology: Cheops or Khufu?

Published on In Brief, Egyptological, 25th April 2014. By Brian Alm 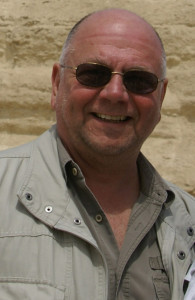 Call me a curmudgeon if you will, but I prefer “purist.” Purists are expected to rant occasionally, but often there is vindication for that, grounded in practicality. I am speaking of the mess the Greeks made of Egyptian words — names, especially — that has carried on down to the present day, perpetuated (unfortunately) by some of the best Egyptologists in the business, and by now no doubt irreversible. Purists can be frustrated — short of madness, although perhaps not by a wide margin — by such irritations and the futility of their remedial efforts, and I suppose others may as well just let those of us so inclined simply grimace and grind our teeth.

But all that aside, there are practical matters: namely, the confusion of the general public, and especially the newcomer who is interested in ancient Egypt but almost immediately hits the barrier left by the Greeks. “Cheops? Then who is Khufu? And I thought his son was Khafra, but here it says ‘Chephren.’ What’s up with that?”

I was one of those interested newcomers, longer ago than I can bear to think, more than fifty years, in fact, and now I will take this as my Bully Pulpit opportunity to set things straight, futile though the campaign may be.

I am not entirely purist, for practical reasons, wish though I might. I have given up trying to get back to Egyptian on some words that are mired too deep in common practice to root out, like Osiris (Usir/Usira), Isis (Iset), Nephthys (Nebthet), Anubis (Anpu/Inpu), Thebes (Uaset), Memphis (Men-nefer or Hut-ka-Ptah), Heliopolis (Iunu), Hermopolis (Khemennu) and scores of others. For some, I pacify myself with a somewhat de-Greeked version, like “Thutmose” — I don’t insist on Djehutymes — but “Thutmosis” is going too far. For others, I remain stubborn. Menkaura will always be Menkaura to me, never “Mycerinus.” Apep, not “Apophis,” Sopdet, not “Sothis,” and so on.

Spelling is another frustration for which I make some occasional accommodations. I bow to “Amenhotep” and do not cling to “Amun,” but in good conscience I cannot let “Amenophis” slip past my lips. Modern linguistic differences account for some of the variance in spelling, of course, and that is understandable. The “Beautiful Lady Comes” is Nefertiti to us in English, but Nofretiti to the Germans. Some (myself included) put in an “e” to separate syllables, some do not: neferet, nefret; Seneferu, Snefru.

Well and good, but imagine the confusion of the newcomer, who sees such differences — even in the writings of highly respected, widely published Egyptologists — and attempts to sort out who’s “right” when in fact they’re all “right,” but inconsistent. Complications arise from applying modern languages to spelling, especially when we really don’t know how the ancient Egyptians pronounced things anyway — oh, we have a pretty good idea about a lot of it, but there are no CDs in the archaeological findings, not any 8-tracks either, nor even any 78s.

In absence of completely clear direction, we all fall back on our preferences, and for me it will always be “Ra” (rah), not “Re” (ray). So for me it’s “Khafra” and “Niuserra,” and I spell accordingly. I suppose I am just adding to the confusion I am railing against, but I am in excellent company. It seems to me that some of the confusion could be avoided simply by taking a look at the Egyptian spellings. Serket, for example, is clearly “Serket,” not “Selket” (or the Arabic version, spelled with a q). But most of the books have her down as Selket. Why? I grind my teeth over that.

Imagine too the confusion that arises for the newcomer who reads about the “solar Horus” or “Horus the Elder” and then about Horus, the son of Osiris and Isis; the celestial Horus who preceded even Ra versus the Osirian Horus, born as a little baby into the Heliopolitan Ennead. Might the confusion be reduced by calling these Horuses Harakhty/Ra-Harakhty and Hor/Hor-es-Iset? See, the inconsistency is unavoidable: even I wrote Heliopolis instead of Iunu.

And in truth, I have no problem calling Ta-Shema “Upper Egypt” and Ta-Mehu “Lower Egypt,” or referring to the Valley of the Kings instead of “Ta set a’at” (the Great Place) or saying “Memphis” instead of picking which of three Egyptian versions to use: Men-nefer (Eternally Beautiful),  Hut-ka-Ptah (Dwelling of Ptah) or Ineb-Hedj (the City of the White Walls); that would be even more confusing. Pyramids can be pyramids, not “meru,” and “obelisk” is fine, it doesn’t have to be “tekhen.” But I draw the line at “naos” (Greek) and “sanctum sanctorum” (Latin); what is so wrong with “djeser-djeseru” (Holy of Holies)?

What might we gain by calling the seasons Akhet, Peret and Shemu instead of “Inundation, Emergence, Harvest”? It seems to me that the more we can integrate Egyptian terms into the study of Egypt, the closer we can get to the culture we are trying to understand instead of clinging to our linguistic safety blankets. That’s the purist in me again, rising up like uadjet.

Of course, I can live with “hieroglyphs” (medu-netjer), “Karnak” (Ipet Isut), “Luxor” temple (Ipet Resyt), “Elephantine” (Abu), “Abydos” (Abdju), and some of the Arabic names, like “el-Lisht” and “Amarna” instead of Itj-tawy and Akhetaten, simply for ease of geographic identification today, but I don’t know why the uadjet cobra has to be a Greek “uraeus” or why the provinces of ancient Egypt could not remain “sepatu” but had to be reduced to “nomos” in Greek and then again to “nomes” in English.

Let us return to the matter of pronunciation for a moment. I knew a guy in Luxembourg who asked someone, in French, “Where is the train station?” But he pronounced “gare” like “guerre,” and the Luxembourger replied, “Well, it’s been over for many years, but it used to be over there,” and pointed. Alas, we don’t have any sure guide to the pronunciation, although some very smart people — Marianne Luban, for instance — have applied enormous scholarship to the matter and have come as close as we’re likely to get toward understanding the sound of the language. So maybe it doesn’t really matter a lot if we say “AHmen” or “ah-MOON” (Amen, Amun), “Rah” or Ray” — we don’t risk looking for a war instead of a train station — but we still have to wrestle with words with lots of syllables, and the very length of many Egyptian words, names especially, has been a stumbling block for many. I can see them roll their eyes when I pass out a handout in one of my lectures, like a kid entering his first chemistry class, initially stultified in his tracks by the periodic table posted on the wall.

So I tell them, don’t be intimidated by long Egyptian names and words. Just break them into small, distinct syllables: tut-ankh-amun, neb-kheper-u-ra, ankh-e-sen-amun, user-ma’at-ra-setep-en-ra. If there’s an “au,” as in Menkaura, don’t make it “ow” like “cow” or “au” as in German — pronounce each sound separately: Men-ka-ooh-rah; Taueret: tah-ooh-air-et. Do not emphasize or put a lot of accent on syllables; make them fairly monotone — unlike English and all the other western languages; just leave syllables unaccented, without much rise and fall, more like Japanese.

Then I say, make the vowels consistent: ah, eh/ay, ee, oh, oo, not ay, ee, eye, oh, you as in English. Consonants are not a problem, but a couple of combined consonants bear mention: “dj,” like j in joke or dg in lodge (djed, Djehuty), and “tj,” like ch in church: netjer (netch-air, god), tjaty (chotty, vizier). The only real problem comes with the quail-chick “u” combined with another vowel to make a diphthong, because it’s so often converted to a “w” to produce the “w” sound in English (of course, it doesn’t work in German). So “Uaset” (Thebes) comes out “Waset,” and that’s OK, but when the word is “uas,” the scepter meaning “dominion,” and it’s written “Was,” the temptation is to think it’s like the past tense of “is” and pronounce it “wuz” instead of  “wahss,” which has no real equivalent in English. So I tell them, just make all the “s” sounds “s,” not “z.”

Whether any of that would make the slightest bit of sense to an ancient Egyptian, I do not know, but it does get the interested newcomer to open a book and stick with it.

I give lectures and programs on Egyptology to local groups, either as part of a post-graduate, non-credit institution called CommUniversity or one-off talks to civic organizations, libraries and whatnot, and I can report that the mysteries and frustrations I have indicated above are real, and when the veil is pulled away the bright smiles and nodding heads tell me that the intimidation is under control — Apep (NOT “Apophis”!) has been charmed.

In the CommUniversity courses, at this point we usually get into decoding pharaohs’ names. They’ve all heard of Ramesses II, but when I spring “Userma’atrasetepenra” on them, all that simple syllabification comes in mighty handy. We start with a list of bits and pieces — names of deities and adverbial, adjectival or nominal comments — and build up nomens (birth names), prenomens (throne/coronation names), and epithets. Then we use these tools to unlock the cartouches.

By now the newcomers are becoming quite happy and unraveling prenomen and nomen cartouches with a will, and I hate to spoil their joy by telling them there are three more elements in the full titulary. “But,” I am quick to add, “the other three are rarely used — just in written documents praising the pharaoh and on official occasions like coronations, but not as forms of address — and with the bits you already have plus a few more vocabulary words, you can figure them out.”

Usually one example will suffice; for instance, Hatshepsut: (1. Horus name) Useretkau (Powerful Are Her Kas); (2. Nebty, Two Ladies name) Uadjet Renpet (ren = year — the Year of the Cobra); (3. Golden Horus name) Netjeret khau (netjer = god, kha = appearance, epiphany — the Appearances of God); (4. epithet+prenomen) Sitra Maatkara (sit = daughter — Daughter of Ra, the Ka of Ra is Maat); (5. nomen) Hatshepsut (Foremost of Noble Ladies). With the epithets she took at coronation, she would be referred to as Nebet-tawy, Khenemet Amun Hatshepsut (Lady of the Two Lands, Conceived by Amun, Foremost of Noble Ladies), but called only by her throne name, Maatkara.

Nobody said this was going to be a walk in the park.

However — now back to my purist rant — it seems to me things would have been a lot simpler if the Greeks had kept their noses out of it and let the Egyptian words suffice. At least we would have one language to mispronounce instead of two.

No doubt there are many in the Egyptological membership who lecture to the interested newcomers and notice the same confusion and frustration that I have seen here, and experienced myself in my early years. There must be others also who lament the Greekification of Egyptian words. There’s nothing to be done about that now, of course, but still, I’d be most interested in hearing your thoughts.