Gertrude Caton-Thompson on the problems of creating a unified Predynastic chronology, 1928

By Andrea Byrnes.  Published on In Brief, Egyptological, 28th April 2014 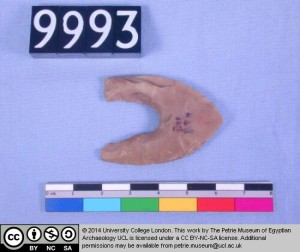 This brief article is based on a few pages from the book, and is made up almost entirely of quotations from Caton-Thompson from three chapters in Part II of the book, sound-bites about her work in this area.   It is intended as an insight into the work that she did on Predynastic chronologies and the clear thinking that helped her to be one of the most important archaeologists working in Egypt at the time. [N.B. The text refers to Early, Middle and Late Predynastic, which was equivalent to Petrie’s Amratian, Gerzean and Semainian, which have now been incorporated into a scheme of phases in the Naqada period (see A Beginner’s Guide to Dating the Predynastic part 1).]

Caton-Thompson had studied, like Brunton, under Margaret Murray and Sir William Flinders Petrie at UCL and had worked with Petrie at Oxyrhynchus, Abydos and Qau.  She spoke Petrie’s Sequence Dating system like a second language, but was concerned that Sequence Dates, based as they were mainly on funerary ceramics, only provided a small part of a much bigger picture.  First, she thought that flint implements had considerable potential for refining sequences, detecting regional variations and providing information about group movements and connections:

As a preliminary point of departure for detailed work on the Predynastic periods in Egypt, approached from the point of view of a prehistorian rather than an Egyptologist, I have felt increasingly the necessity of obtaining data for the correlation of flint types with pottery types on a far more extensive scale than may be expected from cemetery material, where, on an average, not more than about 1 in 20 Predynastic graves contain flint work at all, and these probably restricted in type.  We can afford obviously to neglect no evidence which may throw light on early racial movements; and systematic observation of Predynastic flint work, its regional distribution and character in valley and desert, may be expected to furnish us with at least a valuable check upon such deductions as we may feel free to draw from a sequence of pottery types and manufatures. (p.70).

And she realized that flint tools could provide a granularity of detail that studies of pottery might not be able to achieve:

Flint implement record as surely as the pottery, and in some cases probably even more sensitively, a change in the habits of the people, or even in the population itself (p.80).

The mistrust felt by some archaeologists towards a chronological sequence based exclusively upon purely typological data was expressed by the late M. NAVILLE in Cemeteries of Abydos, Part I.  The validity of such criticism, in a generalized sense, is unquestionable:  the fact that the criticism in particular was specifically directed against the Nile Valley Predynastic sequences, which, though originally a purely typological deduction, have nevertheless proved correct throughout in broad outline, does not abrogate the dangers inherent in the method.  I am far from wishing to underestimate the chronological importance of a “closed find”; but its relative limits are narrow. (p.79).

Her solution to both problems was to focus not on cemeteries and their ceramics, but to locate instead a stratified settlement site, which would help her to understand the way in which settlements developed over time, and to continue to develop her research with the flint implements that were so rare in graves.

My belief was, then, of the desirability of approaching this particular investigation from a settlement-stratigraphy, rather than a cemetery-typology angle.  (p.70).

On page 80, she elaborates on this point:

Graves give us as their special, quite invaluable contribution the physical aspect of a people, the spiritual aspect, as seen both in burial habits and artistic achievement . . . . A settlement, on the other hand . . . if reasonably undisturbed and continuously occupied, gives us with a certainty to be achieved by no other method whatsoever the typological and chronological relation of one succeeding civilization to another.
In the present state of our knowledge of Predynastic Egypt, formed almost entirely on cemetery evidence, the careful dissection of undisturbed middens up and down the Nile Valley may confidently be predicted to increase our grasp of the intricacies of the subject more than the clearance of another hundred prehistoric cemeteries will do.

Having come to these conclusions, Caton-Thompson went looking for a site that would fulfil her goals.  She had a false start at Abydos  in 1921-2 and at Qau in 1923-4, and turned her attentions later in 1924 to Hemamieh.  Hemamieh was in the area of Egypt where Badarian sites had been found, on the borders of Upper and Middle Egypt, to the southeast of Asyut.  The Badarian sites included both cemetereries and settlements, and Caton-Thompson was particularly interested in finding one with a good stratigraphy that she could use to build her stratigraphic sequence for the Badarian.  As she indicates below, Hemamieh did not look promising at first glance, but it proved to be exactly what she was looking for.

That more than one Predynastic period would be represented on such a restricted an unprepossessing site as the North Spur Hemamieh seemed improbable.  A short test, however, showed the potential value of the place, and the first day’s full excavation proved that this was what I sought:  for the first dozen or so serial numbers of objects recorded from it included decorated, black-topped, white-cross-lined, and combed-ware shreds, as well as flints and other objects lying in what was in the trial spot absolutely undisturbed ground.  (p.70).

The site was the stratigraphical gem that she had been looking for, a clear record of occupation from the Badarian through to the Gerzean/Naqada II.

The spur in all its parts, except near the slope down to the bounding gullies, appeared to have been continuously occupied since the formation of the breccia in Badarian times, up till the Late Middle Predynastic period with its decorated pottery and characteristic flint end-scrapers which occurred plentifully in the top layers of deposit.  The deposits are cumulative residue of this continuous occupation; this fact cannot be too positively asserted, in order to remove any possible doubt as to the manner of their accumulation.  (p.73).

Although she was perfectly aware that her conclusions might be challenged by later interpretation, Caton-Thompson was able to use geological data and compare it with archaeological data to suggest estimated occupation durations for some of the settlement layers:

What is the relation in point of time between the Badarian sherds under the breccia layer and those in the lowest levels of the settlement above it?  Geologically the point is not easy of determination and the time allowance necessary for the formation of a 10-in layer of breccia must be purely a matter of individual geological judgement.  Personally I am prepared to believe it might have been formed in a few seasons . . . .  given the required combination of circumstances, it does not appear to be a process which requires length of time.  This view of the matter accords with the archaeological witness. The Badarian sherds from below the breccia are, to my mind, too closely the counterpart of those from above it to permit of a long break in time between the two. (p.73).

She was pleased with her findings, albeit with reservations and her usual pragmatic attitude, stating:

Judged on the broad lines of the averages of different levels, we may gain a general impression, representing on the whole, I venture to think, an accurate picture of the archaeological sequence of events.  (p.73).

However, she went on to express her concerns about using the stratigraphic sequence outside the Badarian area:

At the same time it is well to keep in mind that the evidence of one site is insufficient for conclusions of far-reaching importance outside its own area.  More settlements must be worked.  In Early Predynastic times we cannot expect to find a sequence applicable to widely removed areas in the Nile Valley. (p. 74).

She reinforces this point on page 80:

It is unreasonable to look for uniformity of sequence throughout the great length of Upper, Middle, and Lower Egypt, each exposed to different sets of external stimuli and tribal movements.  A stratigraphical method working in close collaboration with cemetery evidence, each checking the other, seems the only hope of unravelling these complexities.

It is advice that those who applied Kaiser’s 1957 sequence for Armant to other areas without sufficient caution often failed to take.  Caton-Thompson finishes this section with an overview of previous settlement excavations, and some of  it makes for painful reading.  An example is Jacques de Morgan’s work at Toukh.

With Jacques de Morgan lies the credit of the first attempt to deal responsibly with the evidence afforded by the excavation of midden-mounds.  His results are given in Recherches sur les Origines de l’Egypte, 1896, a work as extraordinarily inaccurate in some respects as it is penetrating in others.  Unfortunately his researches took place before the difference in age of various pottery classes had been realized through Sir Flinders Petrie’s work;  and since de Morgan, as usual, givens no account of his field methods, one is left to speculate whether his failure to perceive and interpret his pottery evidence was due to imperfect excavation technique or lack of archaeological stratigraphy in the mounds he excavated.” (p.80).

Her concern for archaeological practices can be best exemplified by her comments on the treatment of flint tools as a dataset:

Yet the indifference displayed by Egyptologists in general towards this groundwork of prehistory is well reflected in the collection and presentation of flint implements in the Cairo Museum – a collection incomplete, unclassified, without history, or referential value;  and this, not only in the most excavated country in the world, but also the richest in flint work of all ages.” (p.80).

In summary, when Gertrude Caton-Thompson began excavations at Hemamieh she did so with the intention of expanding archaeology’s understanding of the area’s chronological sequence.  She was convinced that the information available from cemeteries had been used to effect but had little more to teach about Egypt’s social and material development.  Instead, she believed that settlements and their associated middens would be far more likely to provide stratigraphical sequences and she went looking for them.  After her success at Hemamieh she hoped that many other settlement sequences would be excavated and could be tied in to provide a regionally secure understanding of Egypt’s Predynastic chronology.  Her contribution to this book provides remarkable insights into the challenges facing early archaeologists and their pioneering achievements.   The work carried out by archaeologists like Petrie, Brunton and Caton-Thompson built the Predynastic chronologies on which we now depend, allowing us to discuss the sequences of social and economic transformations that are still being refined.

Caton-Thompson, G. 1928.  “The Badarian Civilisation. Part II,” Chapters I, II and III, p.69-82.  “The Predynastic Settlement:  North Spur Hemamieh.”  In Brunton, G. and Caton-Thompson, G. “The Badarian Civilisation and Predynastic Remains Near Badari.”  British School of Archaeology in Egypt.
Available for download as a PDF from Etana (225 pages) http://ebooks.lib.ntu.edu.tw/1_file/etana//15271.pdf