By Andrea Byrnes. Published on Egyptological, In Brief. 18th April 2013

Traveling Through the Deserts of Egypt. From 450BC to the Twentieth Century
Edited by Sahara Abdel-Hakim and Deborah Manley
American University in Cairo Press, 2009
Hardback, ISBN 978977 416 313 5 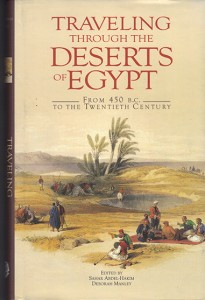 Front cover: Travelling Through The Deserts of Egypt

Traveling Through the Deserts of Egypt is a book of excerpts from the works of writers from Herodotus to modern times.  The authors are the founding members of the Association for the Study of Travel in Egypt and the Near East (ASTENE) and between them have written a number of books and essays on travel writing.  As one would expect with a publication from the American University in Cairo Press (AUC), the production values are excellent.

The three-page introduction to the book explains the format and the general approach taken by the authors to the selection of writers and excerpts.  On page 3 they say that “[T]he meaning of the desert changes from one text to another.  To a great extent, the silent desert offered a blank page on which travellers inscribed their impressions and their imagine conceptualizations of what this – to them- strange place and experience meant.”  As this statement indicates, the collection of excerpts selected her record responses to, and impressions of, the desert experience.  These are contemplative responses rather than forensic analyses.

The authors go on to say, on the same page: “Far from being meaningless, the desert’s richness baffled in a way that many of us may never understand.”  In both statements there is the implicit idea that the way in which the desert was perceived in the past “by them” as something that “baffled” is very different from how today, with our modern perspectives, we would see the desert.  I am by no means sure that this is true.  Having travelled with a number of variety of visitors in Egypt’s deserts, I have always been impressed by the sheer variety of reactions expressed by both first-time and repeat visitors and I have no doubt that many of the ideas expressed by even the earliest writers in this compilation will be very familiar to those who have spent time in the deserts.  The statements are particularly surprising given that a good chunk of the writing dates to the mid and late Twentieth Century, several from the Twenty First Century.

Following the Introduction the book is divided into 12 sections, each containing the excerpts.  Each section covers a particular theme, as follows:

The excerpts are generally around a single page long, often less.  Although short, they are well chosen. All are interesting, some of the writing is beautiful and the vast array of styles, ideas and reactions to the desert are engaging and enjoyable.

I was unable to find any system by which the excerpts are arranged within each section.  I was expecting them to be organized chronologically, which would have enabled readers to see how or if views about the desert or the desert itself had changed over the course of time, but they are not.  Nor do they appear to form any sort of narrative coherence between them.  This means that in section 1, for example, one finds oneself travelling at one moment with Felix Fabri in 1492, then Strabo (via G.A.Hoskins in 1832), then Christopher Pick in 1991, Pierre Loti in 1902, William Dalrymple in 1994, E.H. Palmer in 1868, Annie Quibell in 1925, Giovanni Belzoni in 1820 and so-on.  The upside is that there is considerable variety from one piece of writing to the text; the downside is that the overall effect is somewhat fragmented.  If you are interested in following the writings of one particular author, the index allows you to track their work throughout the book, but for readers interested in the writing of a particular era, there is nothing that allows you to track writing by period.  From this point of view, it would have been useful to have added the dates of each writer in the Index of Travelers.

Part of the variety derives less from the period and more from the diversity of backgrounds represented by the excerpts, a point emphasised in the book’s introduction.  The writers include those who were passing through the desert on their way to other destinations, including pilgrims, tourists and traders, and those whose ultimate destinations were the deserts themselves, mainly explores, archaeologists and surveyors.  Many of the writers were new to me, which is always a pleasure.  Perhaps surprisingly, some of the most evocative writing is by those who were in the desert to work.  Egyptologist Arthur Weigall’s early Twentieth Century writing brings to life his joy of the desert and his endless pleasure revisiting it.  Annie Quibell, an archaeological illustrator, found that the fascination of the desert did not last, but her thoughs on “how the wind and the awful monotony” entered her soul is as gripping as Weigall’s lyrical expression of pleasure.  Styles throughout the book vary enormously, from empirical statements of observation to more whimsical interpretations.  In 1819 Sir Archibold Edmonstone was interested in calculating how far a camel could travel in the desert under a given load, whereas A.W. Kingslake, in 1834, was far more interested in seeing life from the camel’s point of view: “if sighs cannot move you, she can weep.”

The largest volume of writing belongs to the Nineteenth Century, with only a few examples predating the late 1700s.  There is quite a bit from the Twentieth Century and one or two pieces from the Twenty First.   Although most of the writing comes from Europe, there are exceptions, other than Herodotus and Strabo, including Egyptians Ahmed Fakhry and Ahmed Hassanein, Armenian-Turkish Joseph Hekeyan, well known Arab travelers Ibn Jubayr and Zakariya al-Qaswini and Persian civil servant Nawer-e Khosraw,   Women travellers, always in the minority in such extreme environments, are well represented.

Even though not everyone can be included and there is a really good list of authors in this book (see figure 2), there are some writers whose omission seems a little surprising.  There are three excerpts by Ralph Bagnold, but none by fellow Zerzura Club members Rupert Penderell, Robert and Dorothy Clayton East Clayton or Laszlo Almasy, all of whom were published and wrote very distinctive and enjoyable pieces about their adventures in the far southwestern Western Desert in the inter-war years.  Surprising archaeological absentees are Hans Winkler and Oscar Meyers, two of the first serious investigators of the Egyptian deserts who were highly influential on later work and wrote extensively.  More recently, rock art surveys led by David Rohl, Mike and Maggie Morrow and Toby Wilkinson have resulted in publications, which have much to say on the subject of the desert experience.  Finally, anthropologist Joseph Hobbs, who spent a considerable amount of time with one of the Eastern Desert Bedouin tribes, following in the footsteps of Leo Treganza (who is included), published a very popular book on the subject and might have been an obvious inclusion for the People of the Desert section.

Throughout the book, black and white illustrations by Nineteenth Century traveller and topographical artist W.H. Bartlett accompany the text. 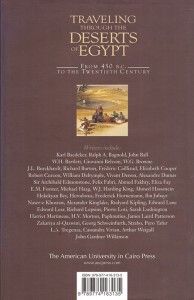 Back cover: Travelling Through The Deserts of Egypt

At 232 pages long this is not the sort of book that you are likely to want to sit and read from end to end, particularly as the excerpts are so very different in style and tone from one another.  Its lack of cohesion and the inability to search excerpts by period mean that it has limited use as a research tool.  But  it is very enjoyable if you accept that the experience is like that of a book of poetry, something that you can dip into and out of as the mood takes you, giving you the opportunity to enjoy each piece in its own right.  I keep my copy at the side of the bed and have taken to reading bits of it before I go to sleep.

This is very much a book for the desert enthusiast.  Even those with only a passing interest in deserts the sheer volume of writing on one topic might represent a bit of a desert overload.  For the real enthusiast, however, it is certainly well worth having a copy to browse and enjoy.  It would make a good gift for someone who has taken pleasure in desert travel and likes to hear how other people have responded to the experience of such an arid environment.