By Andrea Byrnes. Published on Egyptological, In Brief, on 26th July 2011. 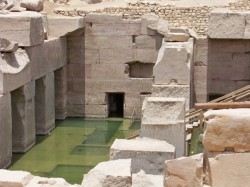 In July 2011 conversations about the Osireion took place on the Discussion page, and I thought that it might be worth providing a brief description of the Abydos structure for those unfamiliar with it.

The Osireion sits behind the temple of Seti I in Abydos. For a clear view of the relationship between the two see the following satellite photograph on Google Maps: http://bit.ly/qTEfss.  It was first excavated by Sir William Flinders Petrie, Margaret Murray and Petrie’s wife in the early 1900s. They found the tunnel and excavated towards what they called the “hypogeum.” It was full of sand and Roman filling when they began to clear it. Even before the full excavation of the site Murray speculated, convincingly, that “this was the building for the special worship of Osiris and the celebration of the Mysteries” (1903).  In 1914, Naville identified it as the “well” described by Strabo: “He spoke of it as being near the temple, at a great depth, and remarkable for some corridors whose ceilings were formed of enormous monolithic blocks. That is exactly what we have found.”

Osiris is so well known that it seems unnecessary to describe him in any depth here.  His increased importance in the Middle and New Kingdoms is, however, worth summarizing in brief.  Rosalie David (2002) suggests that the deity Ra, associated with the Old Kingdom and its decay, followed by the fragmentation of the First Intermediate Period, was no longer a credible protector of the land.  Osiris emerged as the most dominant of a number of popular deities that came to prominence in the early Middle Kingdom.  Closely associated with the role of the king, Osiris, who had the power to resurrect common people as well as royalty, was powerfully attractive and was key, in David’s terms, to “the democratization of religious beliefs.”  Morality and ethics became more valuable than status and wealth as entry qualifications for the afterlife, ideas now captured in the Middle Kingdom Coffin Texts.  In the New Kingdom, the great era of building mortuary temples, Amen-Ra was the dominant deity in Upper Egypt, but Osiris remained of fundamental importance as the deity of resurrection to whom the deceased were presented for judgement before entering the afterlife.  The “Festival of Osiris” at Abydos, described on the Middle Kingdom Stela of Ikhernofret, was an important annual event during the New Kingdom and royal tombs always show the mummiform deity, often presiding over the entrance to the netherworld.  His importance is confirmed by the construction of the temple of Seti I and the role of the Osireion.

Although Osiris, described by David as “the People’s God,” was worshipped throughout Egypt from at least the Old Kingdom, if not before, he had two principal cult centres.  The biggest, in Upper Egypt, was at Abydos (Abdju).  Its counterpart, in Lower Egypt, was in Busiris (Djedu). The close associations between Abydos and Osiris appear to lie in the myth of the resurrection of Osiris.  Osiris was murdered and then dismembered.  The various parts of his body were buried in different parts of Egypt, prior to his resurrection by his devoted wife Isis, and his head was supposed to have been buried at Abydos.

The various connections of Abydos with Osiris occasionally cause confusion.  Although Osiris was certainly worshiped during the Old Kingdom, David says that the important association between Abydos and Osiris dated only from the Middle Kingdom. Wilkinson (2003), however, says that the remains of an Old Kingdom temple of Osiris have been found at Abydos.  Whichever the case, from the Middle Kingdom onwards Abydos was considered to be the burial place of Osiris.  A few kilometres away from the New Kingdom temple of Seti I, in an area of the desert known as Umm el Qa’ab, are a number of Early Dynastic royal tombs, one of which was the tomb of Djer.  The tomb of Djer became associated with the tomb of Osiris, apparently from the Middle Kingdom, when most of the First and Second Dynasty tombs were re-excavated.  The Nineteenth Dynasty Seti I complex appears to have been a reinvention or at least a reinforcement of the Middle Kingdom cult. The Temple of Seti I itself had a number of chambers dedicated to the worship of Osiris.  The Osirieon, probably built by Seti I, was immediately behind the temple, but not connected to it.

O’Connor (2003) says that the Osireion was never completely finished.  It is generally thought to have been started by Seti I, although there have been suggestions that it was considerably older.  It was certainly elaborated upon first by Seti’s son Ramesses II and then by Ramesses II’s son Merenptah, the latter responsible for most of the decoration.  The temple of Seti I was built in an unusual L-shaped configuration and contained chambers for the performance of rituals, some in the honour of Osiris.  It is separate from the Osirieon, but was aligned with it.

David O’Connor’s plan of Abydos clearly shows the relationship between the L-shaped temple of Seti I and the Osireion to its rear.  The subterranean limestone Osireion is rectangular and, unlike the temple which was entered from the northeast, was entered from the northwest via a tunnel that runs from northwest to southeast, the entrance of which was on the other side of the perimeter wall of the complex.  The tunnel reached a wider hallway and extended via a passage to another chamber, where the tunnel appeared to end.  From the hallway, however, the tunnel took a right-angled turn to the northeast into a transverse chamber.  From there a short passage led into the main structure, which consisted of a number of features on a platform surrounded by a channel, apparently intended as a water-filled moat.  The rectangular hall, with vast square rose granite columns holding up a granite architrave, was surrounded by side-chambers – two at the tunnel end, six on each side, and three at the far end, the central one of which opened into another transverse chamber.  Baines and Malek (2000) say that the architrave ceiling “roofed only part of the island hall, the center remaining open,” with the groundwater moat representing the waters of creation and the platform the primeval mound.

On top of the platform were a sarcophagus and canopic chest.  Margaret Murray (1903) described two representations in the hall: the “vivification” of Osiris by Horus and an offering of incense by Merenptah.  O’Connor says that although it has been suggested that a mound was positioned over the chamber, the only actual evidence at ground level is a grove of trees. 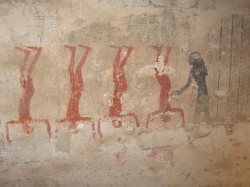 There has been some discussion about whether the Osireion predates the temple of Seti I, perhaps dating back to the Old Kingdom, or whether it merely emulates earlier Old Kingdom monumental architecture.  The decoration, however, much of which seems to have been completed during the reign of Merenptah, is entirely consistent with New Kingdom ideas.  The tunnel was painted with offering scenes and excerpts from the Book of Gates.  The small hall, which marks the right-angle turn from the tunnel into the Osireion’s entrance passage, and the transverse chamber into which it opens before leading into the main structure are both decorated with astronomical and mythological scenes and excerpts from the “Book of the Dead”.  In the main hall Murray describes the chapter of Knowing the Names of Horus from the Book of the Dead. In the northern passage were passages from the funerary texts known as the Book of Gates and the Amduat. Beyond the main hall was a final transverse chamber with a vaulted roof.  It is remarkable for its finely carved astronomical reliefs including, William Murnane says, a “splendid representation of the sky goddess Nut, supported by Shu, the god of the air” (1983).

There have been various interpretations of the Osireion. It was thought by some writers, such as William Murnane, to represent a false tomb (or cenotaph), either as a representation of the tomb of Osiris or as an idealized tomb of the king Seti in the form of Osiris. Baines and Malek describe it simply as the cenotaph of Seti I.  The plan and decoration are certainly consistent with tomb design although the overall form differs significantly from the basic New Kingdom model of a royal tomb. Its more general purpose seems to have been to promote the ongoing resurrection of both the king and the deity for the benefit of the king, certainly, but probably also for the benefit of all Egyptians.

The access tunnel to the Osireion seems to have been open into and beyond the Graeco-Roman period. O’Connor says that graffiti suggests that it was open up until the late third century AD.  There are some excellent illustrations of the decoration and graffiti in Margaret Murray’s 1903 “The Osireion at Abydos.”

Abydos has attracted many modern visitors interested in the spiritualism of Ancient Egypt, mainly due to the presence in the area of an English woman called Dorothy Edie, otherwise known as “Omm Seti”.  Described by David O’Connor as a “vivacious, intelligent woman” (2011) Edie lived at the nearby village of Arabeh and believed herself to be the reincarnation of a priestess of the temple.

In April 2004 it was reported by the Egyptian State Information Service that the site was under threat from groundwater damage.  The platform was covered by water and the stone and inscriptions were beginning to degenerate as a result of harmful salts.  A Swiss team identified the source of the water as nearby agricultural irrigation.  A number of suggestions were made about how the problems should be addressed but there although it was reported in 2005 that the team had initiated a restoration programme I have seen no further official communication about the solution chosen or what progress may have been made.

Naville, E., 1914, Excavations at Abydos: The Great Pool and the Tomb of Osiris, Journal of Egyptian Archaeology, volume I

Wilkinson, R.H. 2003, The Complete Gods and Goddesses of Ancient Egypt, Thames and Hudson

For more about the funerary texts see the excellent The Ancient Books of the Arterlife by Erik Hornung (tranlsated from the German by David Lorton), Cornell University Press, 1999.

I don’t have access to it at the moment, and therefore haven’t read it, but if you have access to the book and speak German may like to read the following paper about the decoration of the Osireion, pointed out by one of our readers:  von Lieven, A., Bemerkungen zum Dekorationsprogramm des Osireion in Abydos, in: Haring B. and  Klug, A. (eds.), 6. Ägyptologische Tempeltagung: Funktion und Gebrauch altägyptischer Tempelräume, Wiesbaden 2007, pp. 167-86.