As usual the Journal contains a small number of academic articles.  Etienne Vande Walle, a former President of the Brussel’s Court of Instance has contributed a number of previous articles combining his deep knowledge of legal systems with considerable personal research into Ancient Egypt.  We are delighted to publish his sAb Corpus (Prosopographie), a 307 page compendium of the usage of the title sAb.  Written in a combination of English, French and transliterated hieroglyphs, his sAb Corpus is likely to be a reference work for anybody studying the Egyptian legal system for decades to come.  (You may prefer to follow the link above to the full PDF – the Journal article is simply a cover for the main document.) 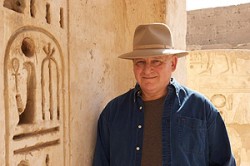 This is joined in the Journal by Andrea Byrnes‘s review of John Romer’s recent presentations to the Bloomsbury Summer School which have generated lively online debate.  Leaving the UCL lecture theatre I said to Andrea, “I wonder how many people understood what he was saying?”  His appeal to historiography may have been unfamiliar territory to any attendees who had not studied history at a university level.  Andrea tries to explain his material and sets his ideas into the context of Egyptological historiography.

As usual the Magazine offers a much broader range of content.  Barbara O’Neill follows her recently published interview of Professor Salima Ikram of The American University of Cairo (published in In Brief between editions) with a detailed interview with Dr Nadine Moeller (Assistant Professor of Egyptian Archaeology at the Oriental Institute and a faculty member of the Humanities Department of Near Eastern Languages and Civilizations, University of Chicago) who talks about her recent work at Edfu. 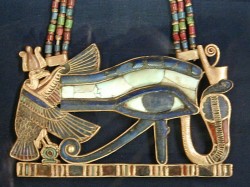 The Eye of Horus signified “whole,” “well being,” and so it was a popular protective amulet, but it also represented Ra.

Continuing his admired series on Egyptian religion, Brian Alm turns his attention to Art for Eternity.  As usual it is lavishly illustrated with many photographs from Brian’s own collection which have not been published previously.  Remember that in all our articles you can click on any image to reveal a gallery of all the attached images, many in higher resolution.  Garry Beuk continues his series looking at famous Egyptologists with the first of a two part biography of Arthur Mace.

True to our tradition of offering a platform for as many writers as possible, we also welcome contributors new to Egyptological in In Brief.  In an earlier article Deities of the underworld in the New Kingdom Brian Alm introduced us to Ammit. Rosalind Park  now puts detailed flesh on the bones of this “fear-inducing being who lived in the Hall of Judgement” and asks whether Ammit is the mother of the sphinx?.  Although depicted in scenes of the Weighing the Heart, Ammit often receives scant attention compared to the more famous Anubis and Roz’s article will be welcomed by many wishing to learn more about this demon-like being.

If Ammit is not well known, the Egyptian traveller Phopis is utterly obscure but he is the subject of Jan Robinson‘s In Brief article entitled Vernacular Voices.  It is a truly delightful piece and demonstrates forcibly that quality research need not be lengthy.

Andrea Byrnes and Kate Gingell together offer an interview of the TV documentary (and DVD in some regions) The Pharaoh Who Conquered the Sea about a reproduction (re-enactment) of  a ship from the time of Pharaoh Hatshepsut, famed for her expedition to the Land of Punt.  I (Kate Phizackerley) have also co-written a piece, in my case with Michelle Low.  In the English tradition of debate we both turn our attention to the question of whether Egypt was the first nation state. 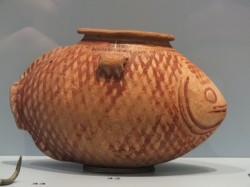 Naqada II vase in the shape of a fish, Ashmolean Museum

Andrea Byrnes has two further articles in this edition of the Magazine reviewing both the newly renovated Egypt and Sudan galleries at the Ashmolean museum in Oxford, England and Egyptian Hieroglyphs for Complete Beginners by Bill Manley who is increasingly synonymous with the teaching of hieroglyphs.  Andrea loves Manley’s book; she is less enthusiastic about the refurbishment of the Ashmo (as it is commonly known).  Those wishing to see rather than read will be delighted that in addition to the many photographs in Andrea’s article, Francis Lankester has contributed a further album of photographs.

Andrea has also reviewed Lost Nubia. A Centennial Exhibit of Photographs from the 1905-1907 Egyptian Expedition of the University of Chicago by John A Larson.

My own meager contribution to this edition is a review in the Magazine of Memphis Under the Ptolemies by Dorothy L Thompson.  Scholars are likely to lap up the entirety with enthusiasm but for me it was the more human story of two families which fascinated me.

Last but no means least, I should mention the Colloquium Overview: Recent Archaeological Fieldwork in Sudan by Patricia Spencer.  Published early on 16th May because of the need to publish it quickly, the piece is now adopted formally into this edition of the Magazine.