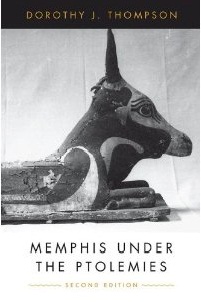 I was looking forward to reading the second edition of Memphis Under the Ptolemies by Dorothy Thompson.  There is an allure, almost a mystique, to Memphis.   I wanted to say I enjoyed the book.  Sadly I cannot.  It became something of a chore, but one rewarded by a great chapter later in the book.  An unexpected treasure.

Many other reviewers have considered the book in the context of its standing as an academic work.   Most students and scholars are likely to have access to the book through their faculty library.  In approaching my own review I have therefore considered it more from the viewpoint of enthusiastic amateurs or distance learning students who do not have access to a specialist library.

I should say it is not a bad book.  By many measures it is a very good book.  It is, if not exhaustive, at least a highly detailed account of the city of Memphis under the Ptolemies.  A third of most pages, sometimes a half, is given over to footnote references so that students can locate the source material to take their research to the deepest level.  This, in so many ways, is a book aimed at students and for that target audience is successful, and would make a sensible purchase.

The chapter headings are:

(The author uses an uncommon spelling of The Serrapieion which I have adopted in this review.) Ahead of the main chapters, and following them are various prefaces, notes and appendices:

So which chapter was the stand out read?  The unprepossessing Chapter 5, “The Undertakers”.  It perhaps is unsurprising because the author is an honorary president of the International Association of Papyrologists and this chapter’s material relies on an archive of papyri from several generations of the families engaged in the profession.  The chapter is well written, engaging, informative and requires little prior knowledge. It is also about much more than mummification, which actually receives relatively scant attention.  Much of the chapter is about inheritance and the structure of families.  It also outlines Egyptian contract law.  It’s a fascinating read.

The difficulty with the other chapters is twofold.  Firstly I found the writing anything but engaging and in many cases they required considerable prior knowledge, knowledge which I lacked (which may be the problem).  The vocabulary is large. For instance on page 102 in the second edition, “From the late third century BC a royal subvention, the syntaxis, already financed much of the cost of the temple cult, …”  And on page 102, “The Temples were left in control of their land (some that had been confiscated by the Persian King Xerxes was reendowed by Ptolemy as satrap), and on this land they now paid a tax of one artaba to the aroura.”  This rich vocabulary is a two-edged sword.  The highly specific vocabulary will suit those already well-versed in the study of Ptolemaic Egypt but it is somewhat inaccessible to those wishing to learn about the subject for the first time.  I presume for instance that “artaba” is a coin or other monetary measure but I don’t recall it being introduced in the chapter on economics which is largely concerned with the commerce of various commodities – textiles, faience etc.  Actually the chapter on economic life was my second favourite and, like the chapter on the undertakers, was real and accessible as well as presenting considerable detail.

For the most part the barriers to understanding seem to lie in foreign terms like satrap (Persian / Hellenistic) and obscure terms like syntaxis and aroura, and not in classical Egyptian terms.  A grounding in 3rd century BC history of the Mediterranean and near East may serve the reader better than a knowledge of Dynastic Egypt.  The author points out that the language of officialdom was Greek, with ancient Egyptian used in temple ceremonies such as coronations and demotic Egyptian amongst the lesser classes.

Where the book scores is in the detail provided both in the main text and in its tables.  For instance the table of Apis bulls during the Ptolemaic period is something many students will find useful.  Likewise the chapter on ethnic minorities is detailed and steps through many ethnic groups including, Phoenicians, Caromemphites, Hellomemphites, Jews and Semitic settlers, and Idumaeans. There is no doubt that the book was thoroughly researched by a leading specialist in the period.  It certainly belongs in any university history library.  It is a welcome addition to my personal library and, if I write about this period, I am likely to use it as a primary reference.

The book has garnered excellent reviews from highly regarded scholars.  This is no surprise and the reviews are merited.  The author, Doroth J Thompson, is a Fellow of Girton College, at my own alma mater, the University of Cambridge. She is a member of the Faculty of Classics at the University of Cambridge, a Fellow of the British Academy and an Honorary President of the International Association of Papyrologists.  She is a scholar, writing for scholars.  While she references many secondary sources, the core material has been based on primary sources.  Thompson has also corresponded with many top experts in the field, many of whom have generously provided access to unpublished material.  For instance, in the preface to the second edition, Thompson thanks a team of learned boukoloi: Harry Smith, Sue Davies, Didier Devauchelle.

I should add that the book is mostly text.  The paperback has eight black and white plates but they add little to the book, particularly for the target academic audience, and could readily have been omitted.

Ptolemaic Apis Bulls and other Appendices 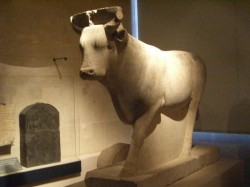 Where other books might content themselves with just stating the list of bulls (as above), Thompson goes much further and includes a list of references from inscriptions which provides the complete state of present knowledge.  It is this attention to detail, and the linkage to primary sources where possible, that is the true value of this book.

Likewise Appendix C provides a complete index of the (presently known) papyrii in the property settlement of 197 BC, principally involving Taues’ family of choachytai and should be sufficient for other researchers to access all the primary papyrii.  Translations of the papyrii are not given, but a chapter in the main book was dedicated to the settlement.  Similarly Appendix B lists 33 primary sources for undertakers and choachytai, plus 2 further footnotes offering multiple alternative sources.

Appendix A is the only one which may disappoint researchers and students.  While it lists professions (under the headings in Table 1 above) it does so only in English (from the Demotic) and transliterated Greek:  the original Greek and Demotic names are not provided.

Memphis Under the Pharaohs is not bedtime reading.  Apart from the Undertakers chapter much of the text is academic rather than casual prose.  If the Undertakers material was released separately I would unhesitatingly recommend it to anybody with an interest in ancient Egypt – it would make an excellent stand alone e-book.

The strength of Thompson’s book is its academic rigour.  Memphis Under the Pharaohs is likely to remain a definitive study text for many more years.  The second edition “remains essentially the work is was when published in 1988” (preface).   The author helpfully notes which chapters are potentially out of date, highlighting in particular the material on cults.  It is also useful that she records that the list of Apis bulls has been brought up to date.  Knowing what material remains current further enhances the book’s usefulness as a study resource.

In short, for those wishing to research the Ptolemaic period the books is nigh essential but casual readers may find it too academic.